Food Review: Flora Brings a Taste of Oaxaca to the Fan 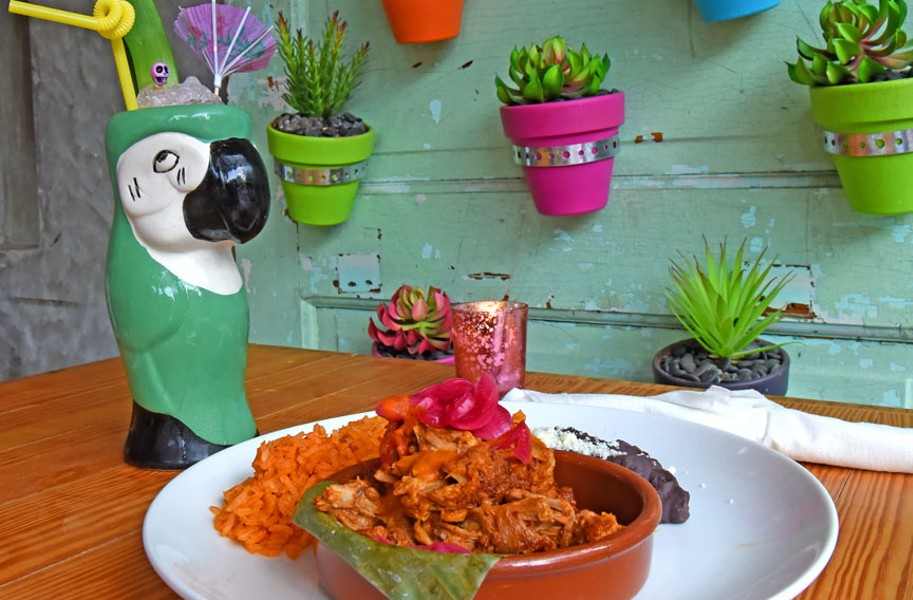 Scott Elmquist Cochonita pibil — pork shoulder that’s been marinated and then roasted in banana leaves — is combined with black beans, rice and habanero salsa, making for a perfect mix of spicy and earthy flavors.

Flora has big shoes to fill. First, the building. After three decades as Bogart’s, known more for its live music than its food, jazz aficionados and musicians mourned its closing and fretted about the future of local small venues. Balliceaux, its replacement, inspired a collective sigh of relief when it continued the back-room music venue tradition, booking creative shows that could resemble an entire night of Charles Mingus covers.

Into this storied structure steps Flora, which has continued the tradition with some creative events and programming. And it steps into a second pair of big shoes: The restaurant offers an upscale, regionally specific style of Mexican food previously missing, or perhaps hidden, in the Richmond food scene. Promising food “inspired by the state of Oaxaca and the Yucatan Peninsula,” the restaurant is the creation of a kind of Richmond restaurant super group — Michele Jones and Jason Alley of Comfort and Pasture, and Saison’s Jay Bayer. If the non-Mexican owners cause you to worry about the integrity of the cuisine, the chef, Sergio Gomez, a longtime employee of Alley’s, is a native Oaxacan who has had a major influence developing the menu.

Denizens of Pasture will recognize the menu structure: snacks, small plates, entrees, sides sold separately, with Flora’s addition of a dedicated tacos and tostadas section. On the snack menu, you’ll find the much-discussed fried grasshoppers ($3), chapulines, as pervasive in Oaxacan food as they are in articles about Flora. Unfortunately, on my visit they lack the characteristic crunch that makes them such an addictive snack — and also, crucially, distracts you from the visual of popping bugs in your mouth. Other snacks offer more substance and make great companions to creative cocktails. Queso fundido, with or without chorizo ($9/$11) or a heaping bowl of fresh-made guacamole spiced up with ancho chilies and crumbly queso cotija, ($8) are solid options to share. The aforementioned cocktails, inventive even by the standards of the current craft cocktail boom, feature plenty of mescal, citrus and intriguing ingredients such as Mexican chocolate-washed bourbon. Try an Evil Kermit composed of aquavit, reposado tequila, celery syrup, lemon, Liquore Strega or maybe a Fake News, made with brandy, Cynar, crème de cassis, dry vermouth and mole bitters — and then hand your keys to someone else.

If you’re with a group, order your cocktails and snacks, then nominate a facilitator to navigate the potentially friendship-testing waters of strategizing your shared meal. Between snacks, small plates, sides ($4) and tacos (3 for $11), to say nothing of the heartier entrees, your path is filled with endless possibilities. Fortunately, most of these routes lead to satisfaction, though the path to culinary ecstasy is admittedly narrower.

Grilled fish tacos are topped with a light drizzle of chipotle mayonnaise, along with red cabbage and radish for crunch and freshness. Most of the flavor, though, comes from the accompanying salsas, which span a range of heat for your own spice-level calibration. I go for the carnitas tacos — the flavorful meat is punched up further by pickled red onion, cilantro, salsa verde and guacamole. Albondingos (Mexican meatballs, $13) are in want of more, with the chili tomato sauce not quite up to the task of complementing the perfectly rendered but straightforward meatballs. Vegetarians will find a few options, such as the potato and soy chorizo tacquitos ($11), hearty flavors tucked in a small fried tortilla.

The entrees feature some stellar options, including chilies rellenos stuffed with corn, beans, nopales and cheese. The chilies, not battered and fried, maintain their texture, unlike the soggy mess that’s served at too many Tex-Mex chains. There’s enough flavor in the pepper and fillings that the reappearance of the chili tomato sauce works here as a slightly piquant accent. Cochonita pibil ($19) features pork shoulder that’s been marinated and then roasted in banana leaves to help it remain moist. When combined with black beans, rice and habenero salsa, you have a perfect mix of spicy and earthy flavors.

To say the food is inspired by Oaxaca feels a deliberate choice, and one that encapsulates what’s both good and frustrating about Flora. “Inspired by” could mean inventive and playful interpretations grounded in a rich and storied cuisine. Or it could feel like a dodge against claims of inauthenticity and attempts to placate nervous diners. Although a few dishes offer windows to revelatory or unfamiliar worlds of flavor, Flora has the room and the pedigree to become an even more creative destination. S

Clarification: Co-owner Jay Bayer explained to Style that the chapulines are not fried. "They are dried on a comal," he says. "Traditionally, they are flavored with lime, garlic and salt — sometimes (and by us) using chilis as additional flavoring. As a result, chapulines are not crunchy. They are more like the texture of dried shrimp.