Sometimes the fun fumbles at this new Boulevard taqueria. 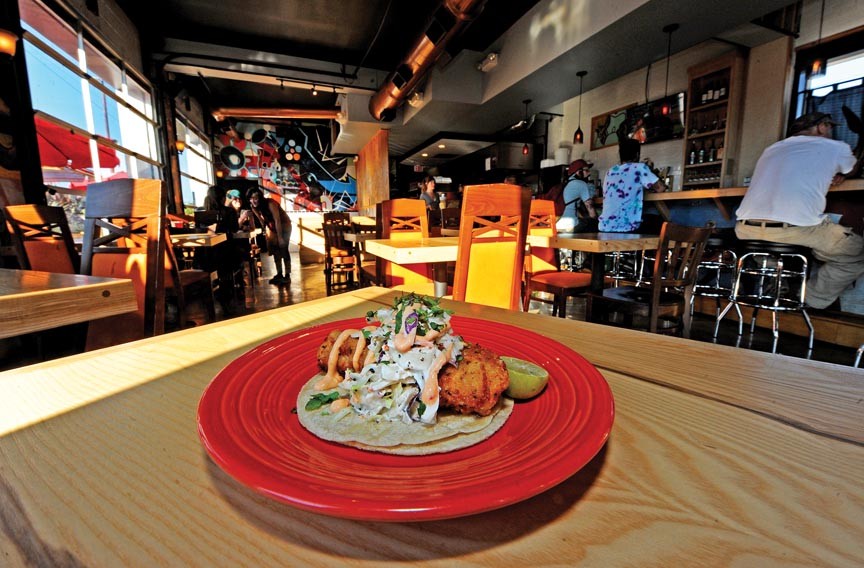 The renovations are spectacular. Huge, garage-style windows line the front, opening onto a wealth of interesting Boulevard character and its characters. A skinny, plant-enclosed patio provides unobstructed views for sipping a craft beer or a Negra Modelo. Parking abounds in a gravel lot — ladies, it's tough on the heels — and on the street. A wood interior surrounds packed-in tables and chairs, and a side kitchen gives a visual of the cooking staff.

A brief, but oversized menu is an amalgamation of weirdly worded dining choices. Totopos are offered as part of the nachos totopos ($10) but unexplained. Typically, they're prepared like tortillas but with the addition of ground black beans in the corn dough. Elote is plainly called grilled street corn. Desserts include a Mexican tiramisu ($6). While far from confusing, the vibe of Boca never quite hits cohesive.

Endlessly refilled corn tortilla chips and salsa ($3), tomatillo with avocado, roasted tomato and a superior spicy mango habanero are adequate for a table to share and dollars spent. Other appetizers are OK, but the street corn ($6) is an all-around stunner. Two ridiculously difficult-to-eat pieces of charred corn are slathered with Cotija cheese and pequin chili for a balance of fresh, spicy and acidic. The messiness factor makes the appetizer far from date food, however.

Tacos can be ordered in myriad forms in singles to 10s ($3 to $25). The chicken is pedestrian, straying into bland. Chorizo suffers from a heavy hand of baking spices. Both the carne asada and the carnitas are on the tough side, making them exceedingly chewy. If the pork were a little less done, the citrus would have blossomed and all would be forgiven. The money shot is the fresh fried fish taco with its zippy cabbage slaw, staying crisp and flaky from kitchen to table. The accompanying cumin crema should be on everything.

In an effort to be humorous (and causing the authentic-Mexican-food-wanting public to cringe), a bacon-wrapped big wiener ($7, $9 with chili) is on the same menu as a taqueria Caesar salad, a pickle jar and deviled eggs. Make the most of this odd addition, though, because it's awesomely tasty, as bacon is wont to be, served on a chewy bolillo roll. In size, burritos rival those at a popular Tex-Mex chain, but don't quite measure up in flavor. The carnitas burrito ($10) has promise in taste but is sloppily constructed and lacks any of the advertised dirty rice. Many bites are just cheese and drunken beans, toothsome but showing no signs of an alcohol marinade.

Service is hit or miss, with the same hiccups as the menu and food. One visit, everything is spot on, another, disjointed and awkward. Addressing some of the kitchen issues and the general dissonance in theme will bring more repeat business and less instability. A spot that chooses its name because of its past should follow through fully to ensure its future. S