Frito pie and taco truck food make a statement at this Carytown hideaway. 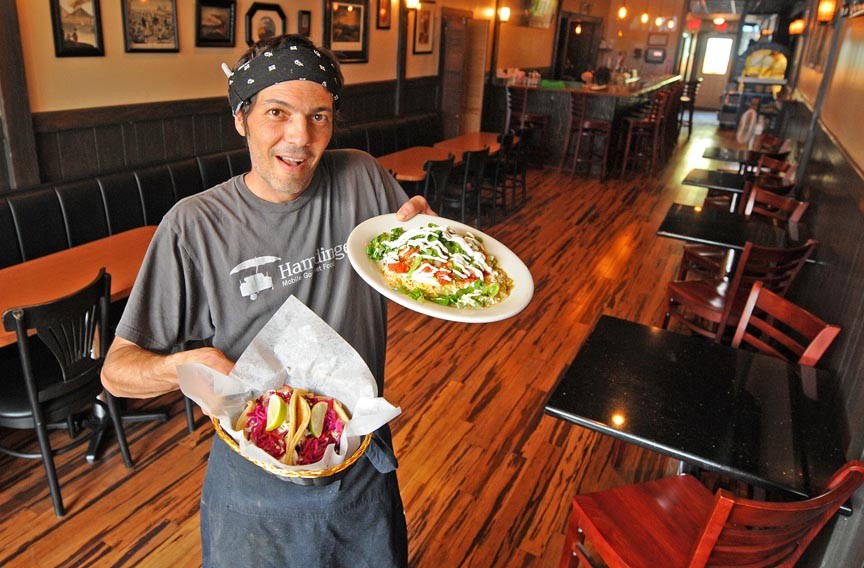 Richmond may not be at the forefront of food trends, but eventually it gets here. Food carts, once accessible only to those who worked near their lunchtime locations, are much more easily sampled through food truck courts — Tuesdays and Fridays at the Virginia Historical Society, Wednesdays at Chesterfield Towne Center, Thursdays at Hardywood Brewery and even a special late night (11 p.m.-1 a.m.) Saturday court next to LaDifférence in the Bottom.

Logically, the next level of food truck evolution is a brick-and-mortar location. Thai Cabin brought spice to a storefront in Jackson Ward, and Nate's Taco Truck did a truck stop spot a few doors down. But when that required too much time away from his family, Nate Gutierrez closed it, disappointing fans of his distinctively fresh take on Mexican.

Without so much as a backward glance, Gutierrez resurfaced as chief cook at Don't Look Back in Carytown. And to those devoted to his cart menu, let me answer the all-important question in your minds: Yes, the Frito pie came with Nate.

The menu is slightly larger than the cart's, with no big surprises. A variety of tacos ($3) are offered in soft corn or flour tortillas and served either traditionally, with cilantro, onion and lime, or gringo-style with cheese, lettuce, sour cream and salsa. The term gringo can be a disparaging one, but the fact is that every taco on the menu tastes better done in traditional style.

Standouts are fish tacos, pan-seared cod with cabbage slaw, and carnitas, braised and shredded pork crisped on the grill. Chicken-skin tacos are available on a limited basis. What started out as a thrifty way to use leftover skin has become a wildly popular special for its crispy, salty decadence.

Nachos ($6) taste much fresher than the usual bar variety, perhaps because they aren't drowning in cheese — although they are topped with an obscene amount of sour cream. The beef quesadilla ($5) is made with long-cooked and well-seasoned meat, plus just enough cheese to hold it together without overwhelming the flavors.

But when you just want to relive the pleasure of eating from Nate's Taco Truck, the Frito pie ($4) is the way to go. For the uninitiated, imagine Nate opening a bag of Fritos and pouring in pinto beans, shredded beef, cheese, salsa, lettuce and sour cream — sort of a six-layer dip with the chips already mixed in. It arrives in a bag and you eat it from the bag, preferably after a good stirring to blend the ingredients. The combination of lowbrow Fritos and well-executed flavorful, well-cooked beef is the epitome of street food done right.

But you won't be on the street. You'll be in a sleek space with four screens, a small lounge area, a mantel lined with hot sauce choices and an outstanding tequila menu. There's also a soundtrack as distinctive as the chicken-skin tacos. It's mostly indie pop — Helio Sequence, XX, Future Islands, LCD Soundsystem — but be prepared for it to change suddenly if you're there during the Hour of Awesome. That's at 9 p.m. Sunday through Thursday, when PBRs cost only 50 cents and the music sometimes goes south. We are surprised to hear the upbeat strains of the Shins turn into mariachi music one night promptly at 9, only to return to form shortly thereafter. When asked about the abrupt switch, our server grins and explains, "It's mariachi hour and we play mariachi music for as long as we can stand." That is, about 15 minutes.

After four visits, I've yet to eat outside on one of the three picnic tables on the patio, but I've found it impossible to resist the array of 26 sipping tequilas on Don't Look Back's diverse list. With the spicy, citrus-flavored silver tequilas, the smooth, oaked reposados and the complex and nutty year-aged anejos, this is the place to correct the misconception that tequila is the vile spirit of body shots and painful hangovers.

More food-forward cities have been offering extensive tequila menus and nongringo style Tex-Mex food for years. Richmond may be a tad slow, but eventually we get to awesome. S

Food and Drink Don't Look Back