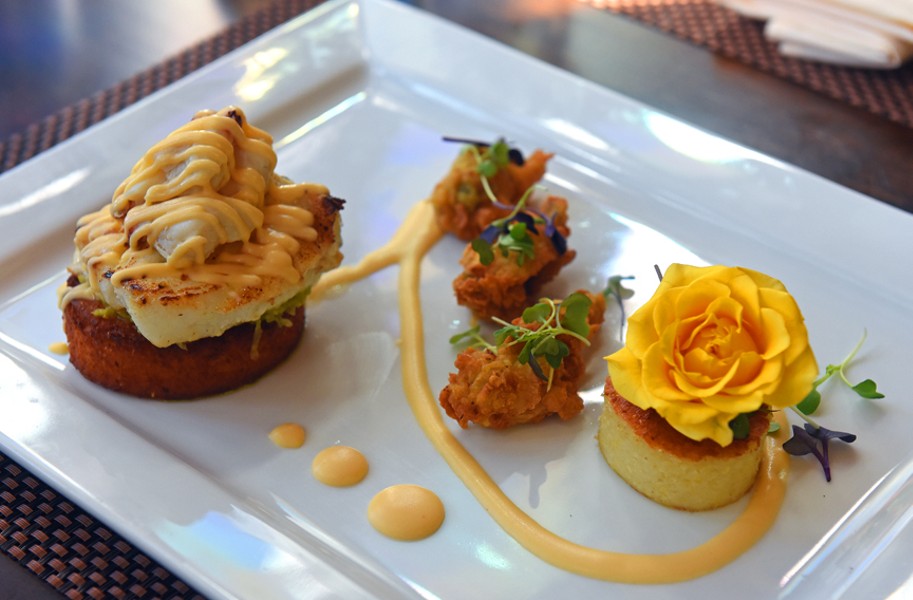 A person can be forgiven for having the same reaction as my companion when approaching Spoonbread Bistro at Floyd Avenue and Robinson Street.

“Isn’t this location cursed?” he says.

For those with restaurant memory, the corner building at 2526 Floyd Ave. housed the original Soble’s, Konsta’s Restaurant, Verbena, Fanhouse Restaurant and Jorge’s Cantina. The place has a bit of a bad-boy reputation. But unlike its predecessors, Spoonbread isn’t trying to attract a late-night drinking crowd that inevitably got the spot’s Fan neighbors in a twist.

The pocket garden inside the brick wall out front doesn’t look planted yet, but I’d make a case for putting in buttercups so incoming patrons can hold one under their chins to assess their love of butter before going inside. If there’s no yellow reflection, you may want to eat elsewhere.

That’s not to say that there isn’t plenty to love about chef Michael Hall’s indulgently Southern take on dinner and brunch, but rather to alert you to the impending richness should you walk through the door.

Inside, you’ll be greeted by a modish dining room set off by dark wood, copper flatware and celery-green upholstered seating. Upstairs, the bar area conveys only a slightly less luxe feel. Service during three visits is attentive and, for the most part, discreet.

If price alone doesn’t get your attention on the classic Caesar salad ($5), then perhaps the delicate notes of lemon will, although not all my posse are on board with the texture of fried spoon bread croutons. That’s your call. Just as thrifty, a house salad ($5) resembles a gift-wrapped package, the spring mix fetchingly arranged square-shaped with long strips of cucumber for the ribbons and a slice of watermelon radish for a bow.

Fusion fans should take note of the Asian-and-Southern-meets-cute allure of pork sriracha and collard greens egg rolls ($7), appropriately crispy on the outside and soulfully satisfying inside. The four appetizers and six seafood entrees on Spoonbread’s menu will woo pescatarians with seared sea scallops over caramel corn pudding, topped with an applewood-smoked bacon drizzle ($10). Blue crab beurre blanc does the same for bronzed sea bass with cabbage, leeks and fried oysters ($27), but I could also make a case for the fried white truffle spoon bread underneath aiding the cause.

And because curiosity is inevitable when you see a dish on the menu whimsically called a lobster pop-tart ($12), know that you’re getting sweet chunks of lobster comfortably ensconced in a rectangle of phyllo dough, with stripes of hollandaise sauce subbing for the icing.

As the main event, the plate appeal of grilled salt-and-pepper strip steak ($23) is improved considerably when it arrives atop a thick Himalayan salt block with roasted asparagus and Arizona potatoes made tantalizing with curry, turmeric and Mornay sauce.

Least impressive, oddly enough, is anything that arrives wrapped in bacon. Both smoky bacon-wrapped chicken breast ($17) and the cat sea pig ($18) — a sea scallop wrapped in catfish, then in bacon — find me questioning the equation. The bacon around the former imparts nothing to the dry chicken and the latter is a muddy combination of flavors and textures.

Brunch isn’t much lighter than the offerings the rest of the week, but at least it covers two meals, so there’s slightly less guilt to eating with abandon.

Baked eggs, bacon, potatoes, swiss cheese and Smithfield ham in muffin tins result in breakfast cupcakes ($8), served over a circle of Sally Lunn bread with hollandaise sauce for frosting and pimento peppers for sprinkles. Both clever and tasty, these easily could be a main course rather than a starter.

Not for the faint of appetite, savory short ribs braised in red wine and port join with sautéed spinach ($12) to transform the cheese omelet, although the flavors balance best once half of the Mornay sauce is kicked to the side of the plate.

Hall is known for his jumbo lump crab cakes, and his crab Napoleon ($15) layers the back-fin-heavy cakes with fried green tomatoes under a canopy of hollandaise and a flurry of crispy country ham. Virtue — such as it is — at brunch can be found with a half grapefruit ($6) sinfully bruleéd with Meyer’s Rum and brown sugar.

Main dishes announce themselves with a fragrant rosebud on the plate, providing the period at the end of every luxurious and decadent sentence at Spoonbread. I know, sometimes unabashed richness is too much.