This intuitive restaurant adapts to the customer's needs. 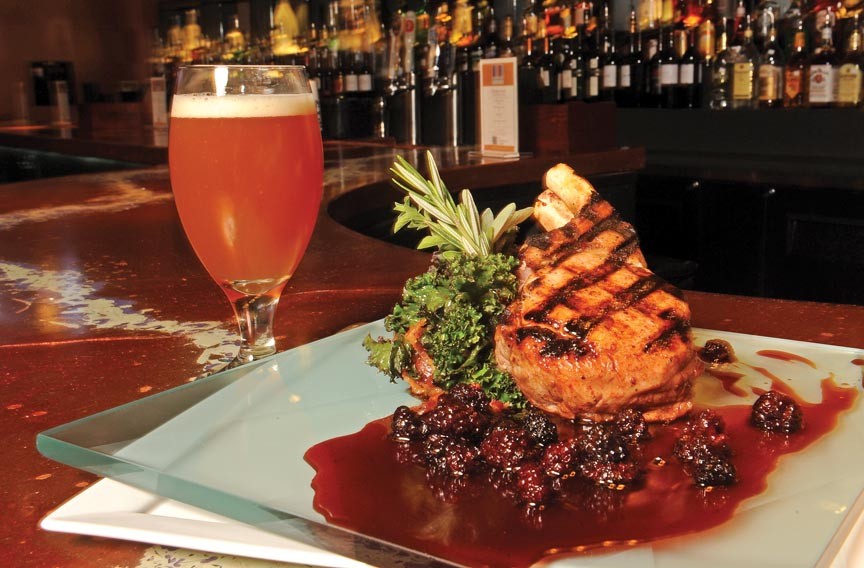 I used to eat one meal a day. Breakfast was coffee. Lunch was tidbits scarfed over a trash can. I planned dinner while driving to the grocery store. Now that I'm pregnant, a full breakfast and lunch are mandatory. Unless I eat every three hours I'll be hunched over a trash can for a reason other than its ability to catch crumbs. I'm beyond hungry when we hit Accanto on a recent Thursday night.
A mature woman with a British accent as soothing as Mary Poppins' welcomes us into a galley-style dining room. She asks how we are and if we'd like to dine at a table or nosh at the colorful concrete bar. Without waiting for an answer, a spot in the window is suggested. The hostess averts a time-sucking debate. A hunger cloud grows over my head.

Our happy-hour nibbles ($5) include artichokes, crusted and fried, topped with delicate and decorative dumplings of smoked salmon, pressed with chive blossoms. They disappear to the sounds of classic rock — played at a volume we noticed in the parking lot but didn't mind inside, because of the restaurant's well-designed acoustics.

Accanto's chef, Ryan Baldwin, is a talented fry cook. If that sounds like a backhanded compliment, consider how often you've been served slimy appetizers shedding their locustlike skins. Baldwin's squash-blossom appetizer ($10), its saffron-lemon cream a moat for gooey goat cheese within the fried blossoms, their stalks left on for a crunch, kills it. Four blooms appear as if they're art nouveau lollipops, lovingly plated.

By 6:30 p.m. the kitchen is out of two of the main dishes we've ordered, and the stone crab claws "ceviche" three ways listed on the menu has morphed into a crab and watermelon soup. Additions and subtractions to the menu should've been mentioned after our server told us her name and before I spent 15 minutes explaining wasabi foam, and yuzu, a Japanese citrus fruit, to my husband, as well as the fact that quotation marks on dinner menus are meant to be ironic, like handlebar mustaches on hipsters. My husband dodges the gnocchi "mac 'n' cheese." I wish for footnotes instead of punctuation.

My grilled romaine lettuces ($9) boast hand-torn croutons — yes, those words are on the menu — atop buttery red leaves in need of a toweling so that the black-garlic-avocado Caesar dressing can stick. White anchovies, olives and hunks of American parmesan add heft. I think this hearty salad will do for my meal, but the hunger cloud still hangs. I order another starter and ask for it to come quickly. It does. The emotional intelligence of our server matches that of the host. Duck tacos ($9.50), shredded, spicy, meaty and topped with slices of radish so thin that I think Baldwin uses a razor blade, make for crisp biting.

The chef shines with meat prep, as I notice on another visit, when a well-chosen venison chop ($18) prompts the words "nice meat." This trip, the apple-cider-braised pork chop ($24) arrives tender, thick and on the bone. But the sweet blackberry sauce, pooled under everything on the plate, masks the flavors of the kale and potatoes. Same thing happens with that perfect medium-rare venison chop, which swims in a blood orange and jalapeño glaze that would better suit cheesecake.

A few service missteps during my visits include not discerning between polenta and potatoes, unfilled pepper shakers that need a wipe and servers repeatedly removing both water glasses for refill to the wait station instead of bringing a pitcher to the table. But Accanto is a casual place where the servers and customers alike wear jeans and T-shirts. Those minor details will shake out. More important than service IQ in a restaurant is emotional intelligence. Darwin thought of it as adapting emotions in order to survive. I think emotional intelligence is the ability to sense and reduce stress in others, even if that stress is yet unperceived. The staff has that by the heaping spoonful. S

Genevelyn Steele, certified by the Society of Wine Educators, studied hospitality and culinary arts at J. Sargeant Reynolds Community College and the Culinary Institute of America, as well as food writing at the Smithsonian Institution. Currently selling wine, she reviews restaurants outside of her industry relationships.