Darrell’s Family Supermarket to bring fresh food and variety to an underserved corner of Henrico. 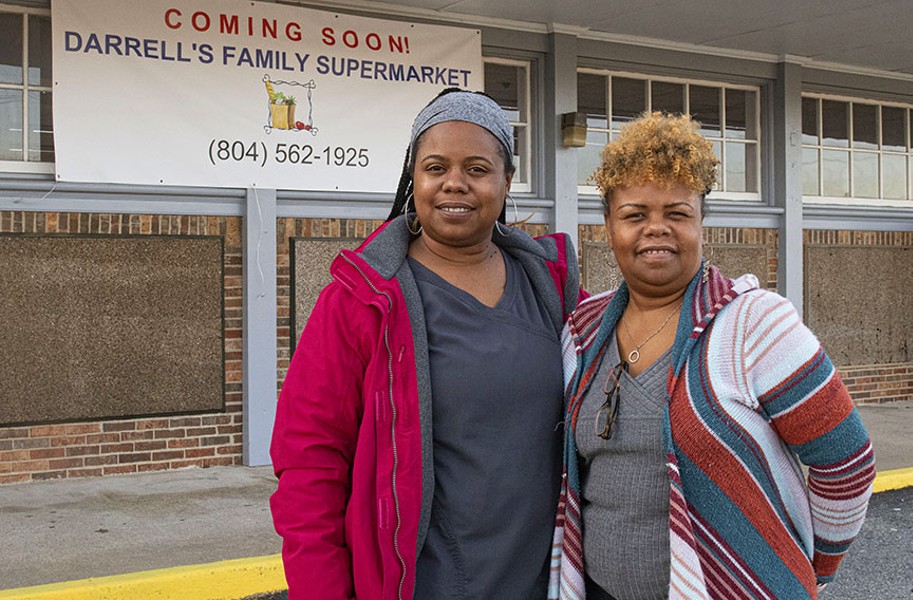 Opening a grocery in the middle of a food desert during the worst pandemic in over a century certainly sounds like a labor of love. But for Renée Truehart, owner of Darrell’s Family Supermarket, the business grew out of compassion for her community.

“The crazy part is I hate shopping,” she says. “I bought this place for the joy of conquering something as large as owning a grocery store and being able to satisfy people.”

A couple months ago when Tyra Gallagher, Truehart’s daughter, got a call from her mother with the news that they would soon be opening a grocery store together, Gallagher was shocked but somehow not surprised. “This is my mom’s dream,” she says. “She’s been after the owner of the building for years to get her hands on this spot.”

Her mother’s dedication to the specific location – a 35,000-square-foot former FoodRite at 5118 Richmond-Henrico Turnpike – is rooted in family history. Truehart’s mother and grandmother were both regular patrons of this neighborhood grocery as far back as the 1970s when it was called the Meadowood Supermarket. Truehart’s sister even used to waitress at the restaurant on the other side of the strip, a Pizza Inn.

For residents of this corner of Richmond, designated a food desert by the federal government, Darrell’s Family Supermarket could finally provide access to the healthy foods they have long requested. “People here want fresh produce and meats, so we’re happy to bring all that to this area,” Gallagher says. “It’s so hard for many folks to get groceries if the store isn’t close and convenient for them. Ending this food desert is part of what motivates us.”

Recognizing the rapid gentrification underway in Highland Park and surrounding neighborhoods, Truehart plans to provide a little bit of everything for everyone.

“We plan to have all the staples from pork chops to craft beer but also include organic and vegan options as well,” she says. “We want to be that market that you can grab anything at.”

Part of the family’s plan to stock a wide range of goods and differentiate the store from chain supermarkets is to include local vendors’ wares. Gallagher even hopes to hold pop-up shops at the grand opening planned for late December or January. She hopes the event will help underline the community aspect of the new grocery and show folks it is here to serve them.

Although her current lease only covers the site of the coming supermarket, Truehart hopes to one day honor that family history by owning the whole shopping center at Azalea Avenue and Richmond-Henrico Turnpike. “I’m going to own the entire strip within five years,” she says, “including the convenience store. But who knows? My goal is to own it all within three years.”

Before the family can dedicate any further thought to expansion, it will have its hands full with the grocery. “This is something that none of us has ever done before, so we’re still learning and getting the final permits,” Gallagher says, adding that they have a lot left to do from getting suppliers and stocking shelves to sorting out the remaining electrical issues with the refrigeration.

To help cover costs and launch in a timely manner, the family has created a GoFundMe account with a goal of $95,000 that it’s hoping to crowdsource. Gallagher’s first post announcing the Black-and-family-owned supermarket on TikTok – a social media platform especially popular with Generation Z – racked up more likes than the population of Richmond, not to mention over 787,000 views and counting.

“We’ve gotten a lot of positive feedback from all over,” Gallagher says. “The outpouring of love has been amazing.” The show of support from people across the globe equally impressed her mother: “The community has been behind us. I have never experienced anything as wonderful. This supermarket has to happen because so many people are rooting for us.”

Truehart believes that sense of connection to the community will lure in loyal shoppers from North Side’s tight-knit neighborhoods. “A lot of people like the store because it doesn’t have the hustle and bustle of a Walmart,” she says. “Our spot gives you a sense of intimacy.”

Even the name of the supermarket underscores how central family is to the enterprise. Darrell was Truehart’s brother who died Oct. 4.

“It didn’t even take me a second to figure out what to name the store,” she recalls. “We were incredibly close. I even have custody of his youngest child. He was a good soul and a humble man.”

Patrons of Darrell’s Family Supermarket can expect only the best of treatment once the mother daughter duo opens the grocery’s doors.

After all, the store’s tag line is “Come in, you’re family.”