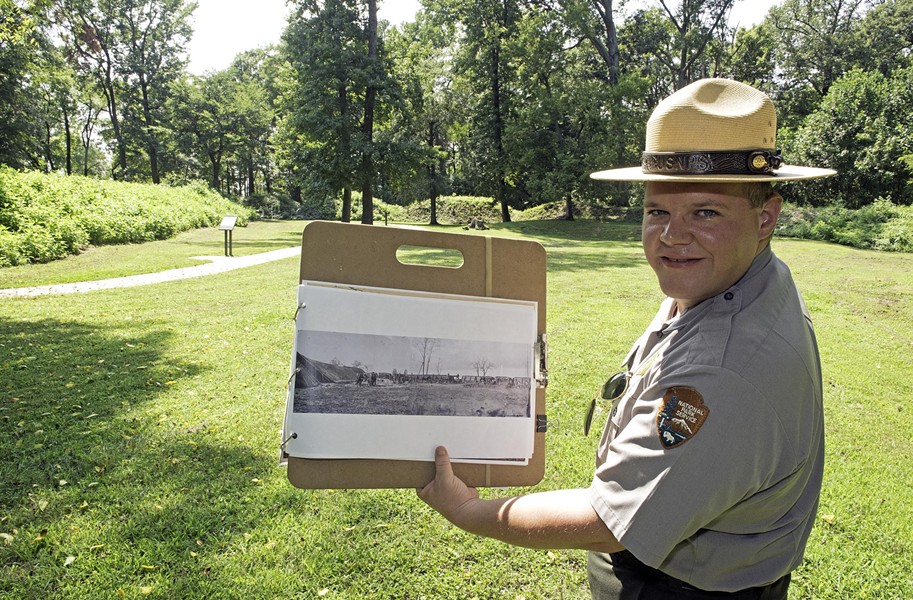 Scott Elmquist In his role as a ranger at Richmond National Battlefield Park, Mike Gorman uses props and personality-driven shows to engage the crowd.

Mike Gorman's path to geekdom began early on. As a kid who was really into the space program, he hijacked his closet to create a space museum, complete with models, books and displays related to space travel. He has no memory of where the closet's contents ended up but recalls other kids coming over to view his exhibits.

Gorman discovered two things while playing guitar in a band during his college years at Virginia Military Institute. "I liked to perform but the business of music sucked," he says. "I started thinking about what profession allows you to perform and be a geek?"

The answer came when he began volunteering at the National Park Service. He thought it would be a cool experience, but instead fell in love with the challenge of bringing history alive. Now, in his role as ranger at Richmond National Battlefield Park, he's found an outlet for not only his geekiness, but also his passion for historical photographs and comedy.

During a lecture on photographing the Confederate capital at the Museum of the Confederacy, he shows an image looking across the canal basin toward the capital. Asking the audience what the blob in the water is, he clicks his pointer and the words "nasty dead horse" appear in red. Because the photographer had taken two pictures of this view minutes apart, both with the dead horse, Gorman turns them into the Civil War-era's only "movie."

It's history with a wink.

"In school, history is a paragraph and 5,000 people died," he says, from a perch on Libby Hill. "I'm trying to breathe life back into history. If you do that, if you talk about dead horses and sex and naked people, people behaving like yourself, that's the real soul of history."

As if to prove his point, he pulls out a copy of a photograph of Roswell S. Ripley's men lined up on the hill directly behind where he's sitting, a direct link from the past to the present.

The thing that worries him most is that we might be relegated to a mere sentence or paragraph in the history books. To address that, Gorman sees a need to tie together what happened there with what the place is now, so people will feel a connection to the past. "We need to remember the emotion and relate to the emotion of these historical memories," he says. "What happens to time? Time is more elastic than your underwear."

During a photographic tour of Fort Brady in July, Gorman leads his group through the most photographed fort of the Civil War, where federal troops stayed six months. But instead of sucking the life out of it, Gorman has done the legwork to match up pictures with sites, making the fort come alive with large-format stereographic photos and 3-D glasses for attendees. Every stop on the walking tour is highlighted by a 3-D image of that exact spot during the war. It's simultaneously unsettling and thrilling.

He knows that some people get dragged along on history tours when they have no interest. "People who aren't into history — they're my treasure, they're my favorite toys," he says, grinning. He wants to convert them and works overtime to pique their interest in his subject. If anyone can breathe life back into the past, it's Gorman. As far as he's concerned, his tours and lectures are personality-driven shows, carefully scripted to share the choicest facts, get the most laughs and garner the most questions.

"It must suck to be a ranger at Gettysburg. It was only three days, no big deal," he says. "Every visitor comes in knowing everything. But here, I get to try to get you fired up about what you didn't even know about. This was the capital of a breakaway nation! I'm not in the business of massaging your preconceptions. My job is to challenge."

An evangelist for the cause, Gorman never misses an opportunity to suggest that people follow his lead and look at the wealth of digitized images on the Library of Congress' and National Archives' websites. But his recommendation comes with a warning.

"It's addictive. If you Google the Library of Congress, kiss your free time goodbye. Dip your toe in that pond and you're going down that path," he says. "This is the time to be a historian with so much digitized stuff available. I love being a historian now. I can do it at 2 in the morning in my underwear. That's the fun." S