Monsters of Folk turn out a near three-hour showcase at the Landmark. 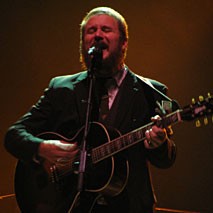 Who knew a bunch of guys suited up like they're going to church in the deep South could rattle your bones with their brand of not-so-folk music? Playing to a shamefully half-full Landmark Theater Nov. 10, Monsters of Folk fully embraced their wild namesake. The so-called supergroup, comprised of master songwriters Jim James, M. Ward, Conor Oberst and producer-extraordinaire Mike Mogis, cranked out a near three-hour show showcasing the band's collaborative work as well as some of their individual songs.

Wunderkind Oberst warbled through a few of his signature bare bones tracks such as “We Are Nowhere and It's Now” and kicked things up with “Soul Singer in a Session Band,” but ultimately proved that he has a ways to go before being on par with his fellow Monsters, despite legions of fans and acclaim that might suggest otherwise.

M. Ward's haunting rasp and timeless guitar proved flawless on “Chinese Translation,” while the wooly-faced Jim James sent spine chills with his strange, muted howl -- utterly primal and devastatingly beautiful -- on My Morning Jacket's “Bermuda Highway.” A moment of perfection came when Ward and James joined forces on “The Sandman, The Brakeman, and Me.”

When it came down to jamming as a whole, the Monsters were an undeniable force of Americana goodness. The curious “Dear God (sincerely M.O.F)” sauntered with a bit of soul and “Man Named Truth” threw back to good ol' pick 'n' strum twang. Giving both Fleet Foxes and CSN a run for their money in the robust harmonies department, the Monsters came off heavenly on “Slow Down Jo.” After 30 songs or so, we could have been set free with more than our money's worth but a blazing four-song encore brought the wow factor. With James swirling like a guitar-wielding rock god and Oberst high atop the drum set at one point, the energy in the room was frenzied and left most folks slack-jawed.

There's a lot of hype surrounding these guys. But the Monsters of Folk proved on Monday that they are a raucous and rave-worthy pack.