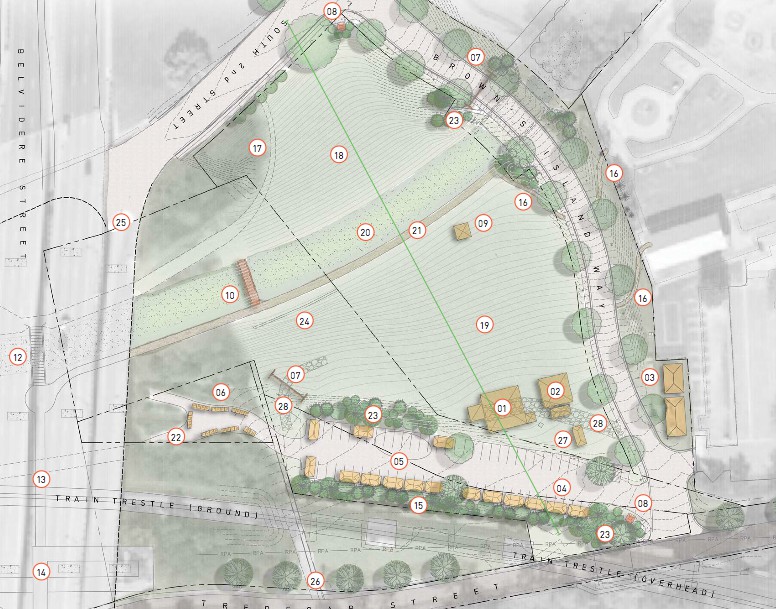 Facing the threat of becoming the People Who Killed the Folk Festival, the Richmond Planning Commission voted 7-0 Monday to give its tentative approval to plans for an amphitheater that will serve as the annual event’s main stage.

The festival’s organizer, Venture Richmond, had warned that failure to obtain the authorization from the commission would spell the end of the popular downtown event, which draws about 200,000 spectators over three days.

“The amphitheater project is necessary to continue the Folk Festival” beyond this year, Venture Richmond’s chief executive, Jack Berry, told the board as he concluded his presentation on the project.

The amphitheater will sit at the base of what’s now a parking lot for visitors to Belle Isle off Tredegar Street and west of the new Second Street connector. In previous years the main stage has been on a nearby green owned by NewMarket Corp., but Venture Richmond says the company’s plans prohibit future use of the property, making the new venue critical.

Neighborhood residents and some historical preservationists offered vigorous opposition to the plan at the standing-room-only meeting. They expressed concern over noise, parking and proposed alterations to a dry canal bed that was surveyed by George Washington and bisects the property.

“Venture Richmond … is using the threat of losing the Folk Festival as a stick to beat the residents of Richmond into agreeing to a plan many of us have reservations about,” said Jennifer Hancock, president of the Oregon Hill Homeowners Association.

The commission also heard from a long line of supporters as well as city staff members, who presented an internal historical analysis that concluded the plans for the venue would rehabilitate -- not damage -- the canal, which they said already has been altered heavily from its original form. The city’s analysis concluded that Venture Richmond’s plans would allow for boat travel between downtown and Maymont if water is ever directed through the canal again.

The chairman of the commission, Rodney Poole, prefaced the eventual vote with a disclaimer of sorts: The commission’s charge, he said, is only to decide whether the proposal fits the location and character of the proposed site and complies with the existing master and riverfront plans.

He told residents worried about the number of events that might take place throughout the year -- and the related parking and noise issues -- that they can raise those issues at later public meetings when Venture Richmond pursues zoning changes that would extend the amphitheater’s use beyond four days a year.

Likewise, proposed changes to the canal also are required to undergo rigorous public review by the U.S Army Corps of Engineers, with input from the Virginia Department of Historic Resources.

Venture Richmond also will need to meet a handful of conditions set by the Planning Commission to obtain the body’s final approval. Among other things, the commission asked the group to provide a survey of trees on the site. After the meeting, Berry said he didn't expect that to be an issue.

“This was the big hurdle,” he said.