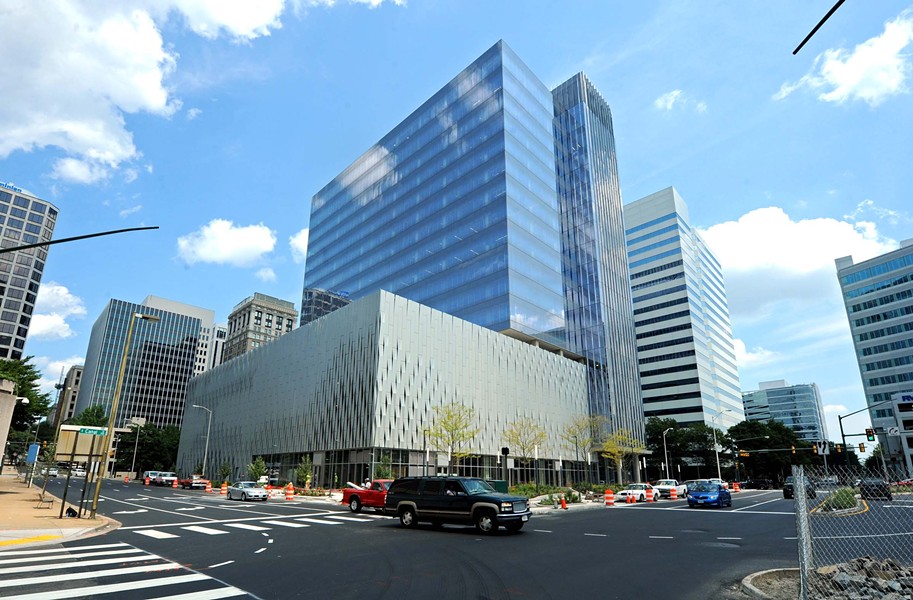 Scott Elmquist The new high-rise at 800 E. Canal St. is a three-part cubist building of glass and metal.

Gateway Plaza at 800 E. Canal St. is an elegant, 19-story symphony in glass and aluminum. This instant landmark, home to McGuireWoods law firm, also is a milestone in the history of the Financial District. It signals that this part of town is finished. Not finished as in kaput, but as in completing the neighborhood’s metamorphosis to a post-industrial office park.

By the mid- to late-1900s, railroads, warehousing and manufacturing were fading fast from the urban flatland that stretches from Cary Street south to the river between Sixth and 12th streets. Well before that, until the mid-19th century, a major water feature was here. On the James River and Kanawha Canal turning basin, packet boats were loaded with or relieved of freight as they plied the waterway to points west and back.

For all those decades, nearby East Main Street was Richmond’s choice address for leading banks, law firms and insurance companies.

The prosperous 1960s ushered in a generation of impressively large developments along Main. Wisely, because preservationists protected much of Main Street’s remaining old building stock, during the mid-1980s developers turned southward to the river — to Cary, Canal and Byrd streets — where they built on mostly empty blocks. There, surface parking lots had long since replaced rail yards and the turning basin.

Completion of the Downtown Expressway in 1980 assured convenient access to what essentially had become a suburbanlike office park. Buildings are isolated and designed so commuters can steer their vehicles directly into underground parking decks and take elevators to workplaces, never having to set foot on city sidewalks.

A landscaped feature of this stand-alone planning approach — in what once was known as the “Main-to-the-James” area — was Kanawha Plaza. Although recently leveled and currently undergoing a severe makeover, it was built as a bridge park to camouflage the deep gorge caused by the expressway. But downtown workers seldom frequented the thoughtfully designed space because it was surrounded and isolated on four sides by wide and difficult-to-navigate roads. It didn’t help that nearby buildings offered few pedestrian amenities such as shop fronts. So there was little sidewalk life.

The Gateway Plaza should ameliorate some of these planning flaws when a restaurant and bank open on the building’s ground level. But its major contribution architecturally is filling a once empty, highly visible lot. Gateway is on-axis with the Manchester Bridge and provides a welcome point to those entering downtown from the south.

So the long-vacant site offered history, location and great expectations. But does Gateway Plaza deliver? Yes, but with a decidedly light touch.

Gateway, designed by Forum Architects of St. Louis, part of Clayco Development, fills the entire block defined by Canal, Eighth, Ninth and Basin Bank streets — the latter of which really is a cobblestone alley. Unlike most of the neighboring high-rise structures, Gateway has no underground parking. This was a fast-track construction project, so digging into the historic turning basin would have required time-consuming archeological excavations. Instead, the building’s first five levels are devoted to parking with vehicles entering and leaving through a gaping opening on the building’s Basin Bank Street side.

Significantly and successfully, Gateway also differs significantly from nearby modernist towers in that its form isn’t a single rectangular monolith. It’s divided into three large rectangular blocks that combine to form a huge, cubistlike sculpture. These three blocks are further differentiated by respective treatments to their exterior walls.

The easternmost block is wrapped in a clear glass curtain wall, delineated by thin vertical aluminum fins that extend outward for 6 inches. While barely visible when viewed head-on, from other angles these extensions provide a highly metallic sheen. The central block of the building is faced in a taut glass curtain wall with the slenderest of mullions. On the western block, the outer surfaces are wrapped in handsome, light-gray-hued aluminum panels that are perforated, cut and bent to create a visually soothing sculptural effect. These surfaces also suggest the sculpture of the late American artist Louise Nevelson: She explored the push and pull, light and dark of surface versus recessed areas.

Gateway Plaza can be entered from the Canal or Ninth Street sides. And because the lobby is a large, long and rectangular space with double height ceilings and floor-to-ceiling, clear glass walls, it’s no surprise that during the day the first impression is of natural light. But blond wooden flooring and similarly hued paneling combine to provide a surprisingly naturalist feel. (The large reception desk, while also faced in wood, alas, comes off as Formica.)

Major focal points of this well-proportioned space are two very different works of art. A huge, floor-to-ceiling mosaic mural depicts the falls of the James River, by the Mickett/Stackhouse Studio. It dominates the lobby’s western walls. The other piece, also by Mickett/Stackhouse, is a large, glass and metal tentlike construction that provides a cleverly designed conversation area within a sculpture. Is it the bow of a boat upturned? Whatever it is, it works. All elements combine to give the space a slightly Zen feel.

The interior’s natural theme, which is surprising with an exterior so “glassified,” is carried out further on the exterior with generous plantings. They fill irregularly shaped planters and borders on three building sides.

While Gateway Plaza might have been designed with a bit more heft considering its role architecturally as an anchor building at a highly prominent location, its massing and detailing are well-articulated and refreshing.

It welcomes with a whisper, not a shout. S