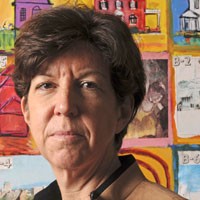 Rachel Flynn, what have you done?

During her three years as the city's planning director, Flynn has cultivated stalwart friends and ferocious enemies. But an exchange at a recent Planning Commission meeting has three of City Council's nine members calling for her resignation, and a fourth signaling that she'd be open to the possibility.

The brouhaha started when, during an April 20 Planning Commission meeting, members asked Flynn to look at new language offered by the developers of Echo Harbour, a proposed condo development along the river below Church Hill.

Flynn responded, “We've been talking with these developers for three years. We don't agree,” according to a Richmond Times-Dispatch report. “We're not compromising anymore. If you want to compromise with them, go ahead.”

Flynn has long advocated that the city buy the land and turn it into a park to preserve the view from Libby Hill and boost property values for nearby homeowners. Legend holds that the view reminded William Byrd II of the River Thames from a similar hill in Richmond upon Thames, west of London. He named this city Richmond.

The developer says it intends to go ahead with its project, and that Flynn's office has intentionally obstructed its plans to move through the city approval process.

After consultants visited the city in July 2007, more than a year of public comment ensued until City Council adopted the downtown master plan in October 2008 with the understanding that it could be amended. On April 20, the Planning Commission was working through a final batch of amendments to the plan.

Critics of the process say those remaining amendments stem from the undue influence of private landholders and developers kept alive by public officials in a position to benefit from them — such as Planning Commissioner Bob Mills and City Councilman Bruce Tyler, both architects whose firms do business with some of the landholders most upset by the master plan. Before his election to City Council in 2006, Tyler met with Flynn on behalf of his firm, lobbying for the Echo Harbour project to go through. (In two separate opinions, the city attorney's office has opined that neither man's situation presents a conflict of interest.)

Last week's outburst from Flynn and the reaction from some politicians brought things to a head.

For those who have been watching the drama unfold, Tyler's scolding Flynn is hardly new. The two have butted heads all along, but public admonishments of Flynn from council members Marty Jewell, Reva Trammell and Doug Conner are new to the mix. Last week, Conner, who also sits on the Planning Commission and serves as chair of council's land use committee, sent the mayor a letter calling for her resignation.

“I think what she did was appalling, utterly appalling,” Jewell says, adding that he plans to send his own letter to the mayor this week.

Trammell “finds [Flynn's] conduct unacceptable and she needs to be disciplined if not terminated,” the councilwoman said in a statement through her legislative aid Henry Meese.

Flynn's supporters are equally vocal, particularly among civic activists and local bloggers. Envision Richmond, a residents' group, has formed to support passage of the new master plan and enactment of its recommendations, and the Better Housing Coalition just named Flynn Community Revitalizer of the Year at its annual community leadership awards. The incident inspired local blogger John Sarvay, who's been following the ins and outs of the planning process, to compose a post entitled, “The Downtown Plan: Why I Love Rachel Flynn.”

Sheila Sheppard, coordinator for Partnership for Smarter Growth, a Richmond-region education and advocacy nonprofit, calls Flynn “a beacon of competence and a beacon of visionary thinking and practical, commonsense leadership.”

“Community support for Rachel is stronger than ever,” Sheppard says. “Citizens across the city are grateful for her leadership and being able to navigate the political scene. The downtown master plan is the best thing that's happened to Richmond in a long time.”

Council President Kathy Graziano, along with Vice President Ellen Robertson, have taken a hands-off approach with Flynn — emphasizing that Flynn reports to the chief administrative officer, not to City Council.

Flynn is no stranger to conflict. In her previous job as planning director in Lynchburg, the Rev. Jerry Falwell's ever-expanding Liberty University was a frequent combatant, leading the late Falwell to condemn her from the pulpit.

“This is Lynchburg, Virginia. This is not Moscow, Russia, or Beijing, China, or Havana, Cuba,” he said in a nationally televised sermon five years ago. “And Rachel, if you wanna live there, go on and live there, but leave us alone in Lynchburg.”

Mayoral spokeswoman Tammy Hawley says that the administration does not comment on personnel matters. In an interview prior to the election, Mayor Dwight C. Jones said good-naturedly that he and Flynn had met only once, “and she interrogated me.” Once he took office, Jones endorsed the findings of the downtown master plan as part of a series of new initiatives.