City continues to seek feedback on future of Boulevard site. 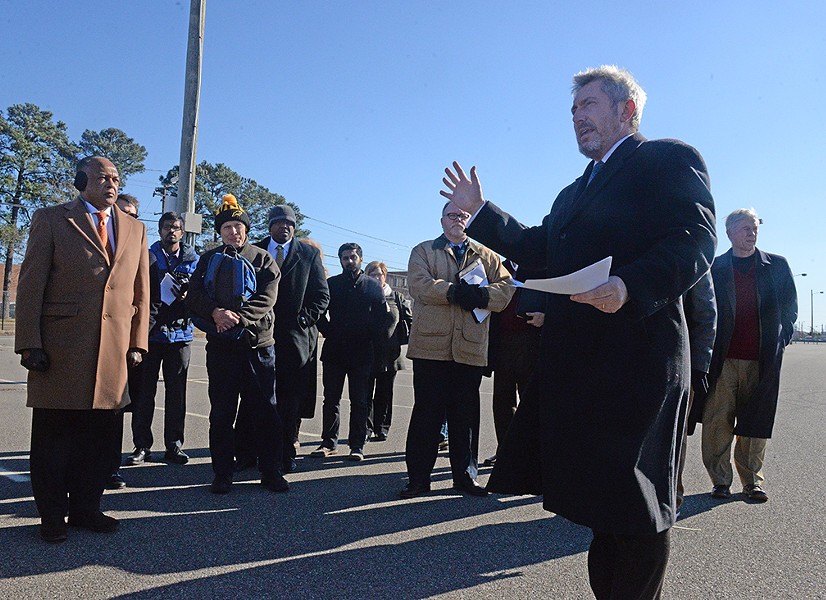 Scott Elmquist Lee Downey, the city's director of economic and community development, leads Mayor Dwight Jones and city residents on a tour of 60 acres of city-owned real estate on the Boulevard on Wednesday. The tour was held before a meeting hours later to gather community input to shape the future of the site.

At the first of six city meetings to brainstorm redevelopment on the Boulevard, roughly 200 attendees showed overwhelming support for keeping the Squirrels put.

Twelve residents spoke last night in favor of keeping baseball on the Boulevard property. When one speaker asked those not in support of The Diamond to raise their hands, only a couple of people expressed opposition.

The meetings are the first step in a plan proposed by Mayor Dwight Jones to help determine the future of 60 acres of city-owned land. After public input and a study, the city will solicit developer proposals.

The Squirrels’ lease at the property ends in 2017. Last summer, the mayor told the team to consider sites outside the city. In an email to fans, the Squirrels asked them to come out to show support.

Before speaking, attendees heard a presentation of economic analysis from Tripp Umbach, a Pittsburgh consulting firm hired by the city. The firm determined that if the Boulevard were developed with retail, housing and a hotel, it would surpass the economic benefit of a stadium.

The findings show that this mix of commercial properties would have an economic impact of $339 million a year and generate $8.8 million a year in tax revenue by 2035. The property currently generates about $400,000 in annual tax revenue.

Consultants said that baseball wasn’t the “highest and best use economic use,” but that it wasn’t ruled out for the site. Tyler Verin, project manager, said that community input would be considered in the firm’s recommendations.

Attendees clamored for their voices to be heard. They demanded that speakers be allowed to share their opinions individually in front of the large group, instead of breaking into small discussion groups. The organizers agreed to change the format.

Harry Warner, a member of the Save the Diamond Committee -- which has proposed a plan to renovate the stadium with mixed-use development -- cautioned against making the Squirrels leave the city.

Jessie Jordan, who lives on the Boulevard, said that the site was the best option for baseball because of ease of access and safety. “Driving into and out of downtown can be a nightmare,” she said. p>Charlie Diradour, a developer and Fan resident, asked city leaders to be more hands-on in determining the commercial future of the Boulevard. “Leave it to the private sector,” he said. “They will handle this. Please don’t force things down our throats.”

The next meeting is at 6 p.m. at the Southside Community Services Center, 4100 Hull St. A full schedule of meetings is available here. Comments also can be emailed to blvd.comments@richmondgov.com.