Did Richmond break its promise to the Flying Squirrels? Why politics might ruin Richmond's favorite pastime.

The bullpen is empty. There's no public money — not $40 million to $50 million for a new baseball stadium, or even a few hundred thousand to offset the Richmond Flying Squirrels' $2.5 million investment in the aging Diamond, where the team plays.

That was the message the region's political leaders sent to the club's owners in early December. After three years of empty promises to build a new stadium for the team, it could be written off simply as a tough pill to swallow in a still-sour economy.

In reality, it's much more. The team's seemingly meager request for a break in rent, and the subsequent denial, is rooted in regional politics and an ongoing tussle between Chesterfield County and the city. The stadium fight is connected to the toll roads, believe it or not, and the county's desire to have more control over the expressway system. The area's only true regional body, the Richmond Metropolitan Authority, owns and manages both the expressway system and The Diamond.

Also figuring prominently is the authority's repayment of $62.3 million to the city for old loans to get the toll road established in the 1970s. Mayor Dwight Jones has insisted that the money be set aside until after the election, which sends a mixed message: How can the city ask for millions from cash-strapped regional partners while it's sitting on $62 million, refusing to spend it?

It's all potentially venomous for Mayor Jones, who's heading into an election year, along with all nine City Council members. Jones can't afford to have the Squirrels publicly reminding voters how little progress the city has made in building a new stadium — or much of anything, really — and it seems unlikely that the counties will jump onto the regionalism bandwagon until after the spring budget cycle, if at all.

"We all indicated last spring that we wouldn't be able to make any decisions with regard to funding [a new ballpark] until we got out of the budget process," Henrico County Manager Virgil Hazelett says. "I'm in the middle of a $53 million shortfall at this point. All of the localities' revenues lag, and it's still lagging for us."

It's the foot-dragging, however, that seems to most bother Lou DiBella, the managing owner of the Squirrels, who's been pressing for cheaper rent and other concessions from the authority since late summer. In correspondence between team representatives and the authority obtained by Style Weekly through a Freedom of Information Act request, frustrations boil over. 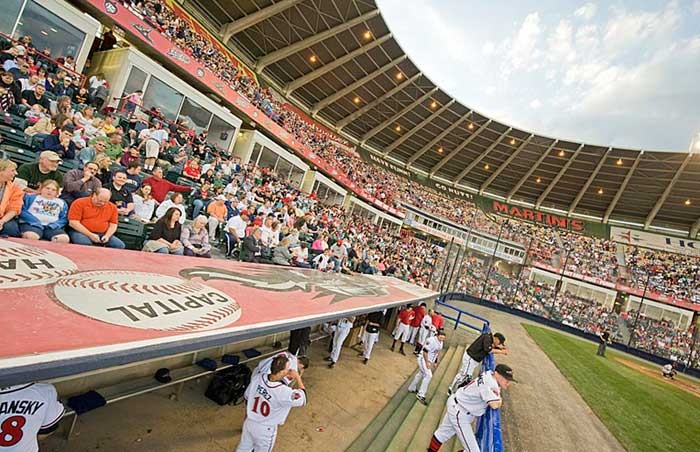 On Aug. 29, Ralph L. "Bill" Axselle, a lawyer representing the team, sent a letter to the authority arguing that the Squirrels had upheld their end of the deal. When the team signed a two-year lease to play at The Diamond in 2009 (with the option for three one-year extensions) it was with the understanding that the team would have a new stadium to play in by 2013, or 2014 at the latest.

"The very strong request of the Flying Squirrels to renegotiate the Lease is premised, in part, on the fact that they have to play their games in an old, now sub-standard ballpark for five years rather than [the] two, or at worse, three years anticipated," Axselle writes.

The Squirrels' owners want the rent reduced by half, from $142,500 a year to $72,250 through 2013, and then to zero by 2014. The Squirrels also want 100 percent of the parking revenue at the facility — it's now shared with the authority — along with exclusive naming rights to the stadium and $61,159 in refunds for improvements that the club made to The Diamond in 2011. The authority had agreed to reimburse the Squirrels $45,194 for the facility improvements.

Mike Berry, the authority's general manager, says that to make up the budget shortfall that the lease amendments would create, the authority would be forced to go to its participating jurisdictions to ask for more funding. The authority is a political subdivision of the state, with the city and Henrico and Chesterfield counties each appointing members to its board (more on that later). To give the Squirrels the break that they want, Berry estimates that the authority would need between $50,000 and $100,000 from each locality in the next fiscal year.

"Right now, we have a lease that's designed to have the facility operate without any assistance from Richmond, Henrico or Chesterfield," Berry says, adding that he ran the lease request up the flag pole to officials in the city and counties. "There was communications with all the jurisdictions on this."

Berry declines to elaborate, but in a letter to the Squirrels in early December, he writes: "The jurisdictions have indicated that any such requests for funding be limited and essential in nature, such as unanticipated maintenance and any critical capital improvements."

In other words, they said no, says Jim Jenkins, chairman of the authority's board. "The feedback that Mike got was that the jurisdictions were not interested, at this point in time, in a subsidy where the current lease arrangement provides sufficient revenues," Jenkins says. 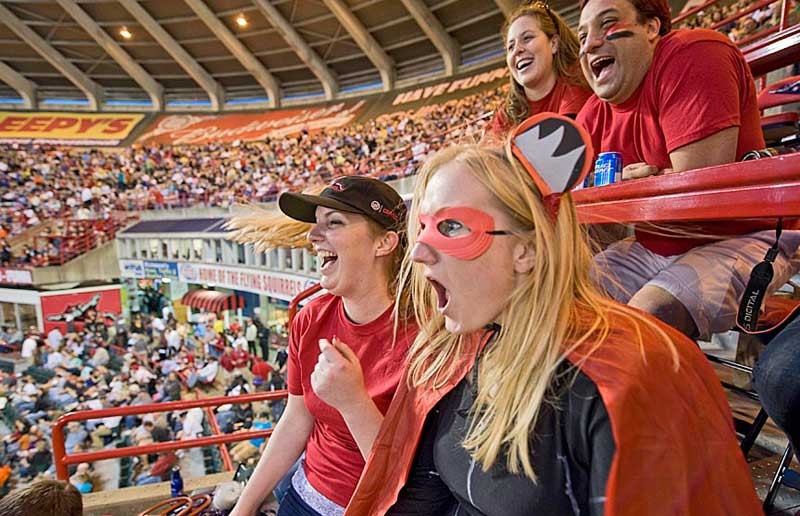 But this is and isn't about shrinking budgets. The Squirrels feel slighted, and perhaps for good reason. After all, how can they expect the region to pull through on a $50 million stadium if the localities won't even cough up $50,000?

"Quite frankly, I feel that the RMA is engaging in bad faith," DiBella writes in a letter dated Dec. 14 to Berry, Mayor Dwight Jones, Henrico's Hazelett and Chesterfield County Administrator James Stegmaier. "I feel that I have been the victim of a political bait and switch tactic and that I am further being penalized by assembling a great staff that has over-delivered and over-achieved in the first two seasons in Richmond."

It's difficult to find anyone who doesn't agree that the Squirrels have acted in good faith, at least. The club has one of the best management teams in minor league baseball. It led the Eastern League division in home-game attendance in its first season with 6,626 fans per game, and drew 6,679 fans for home games in 2011. The team also did something decidedly unRichmond-like — it put its own money into the aging Diamond and agreed to prove itself first. It wasn't build it and they'll come, but we'll come and then you can build it.

"We basically said, 'Give us an opportunity to have a favored status if we are stuck in this old ballpark,'" DiBella says of the lease request in an interview the week before Christmas. "I was expecting more love and it didn't come."

The city, Henrico and Chesterfield will sit down with the Squirrels in the coming weeks to try to find come common ground, Hazelett and Jones say.

"It's difficult to find out what the plan is until you get everybody around the table. That hasn't happened recently," Jones says, referring to the ballpark plans.

But Jones refuses to commit to much else. Would there be a discussion of reducing the team's lease or other concessions? "Perhaps," the mayor says. "We'll see what happens at the meeting and see if we [can] find some way to encourage them to hang in there." 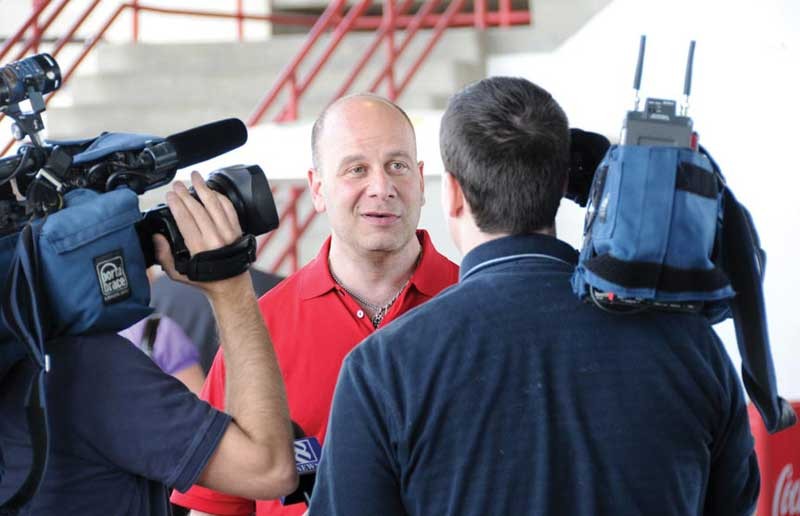 The Squirrels pose an interesting political conundrum for Jones, who took office in 2009 amid a swirling controversy surrounding plans to build a new stadium in Shockoe Bottom. When DiBella agreed to relocate his AA franchise from Norwich, Conn., to Richmond in September 2009, to replace the departed Richmond Braves, he says city officials promised that a new stadium would be built by 2013, or 2014 at the latest.

The city is preparing a site on the Boulevard, next to The Diamond, but no funding plan is in place. And the lack of progress could become potent campaign fodder for a mayoral challenger to Jones.

Henrico and Chesterfield bear some of the responsibility, but aren't under any serious political pressure. Both counties are just coming off elections. Like Henrico, Stegmaier says, Chesterfield's economy is still in flux, as is state funding for schools and roads, while the county prepares for the spring budget cycle. "I kind of look at the lease issue as a business decision," Stegmaier says. "Let the business process work independent of those other influences."

In reality, it's also a political decision. After the city received its $62.3 million for the old expressway loans — in one lump sum, in late November — almost instantly a renewed push began in the General Assembly to take some of the authority's seats away from the city. Currently, the RMA board consists of six members from Richmond, two apiece from Chesterfield and Henrico, and one who's appointed by the state. The toll road, however, connects Chesterfield with downtown, which means that 60 percent of the toll payers live in the county.

Bottom line: Chesterfield wants more control over the tolls. The city doesn't want to lose its majority of seats, as the Downtown Expressway and Powhite Parkway are physically located within the city (the Powhite extension, beyond Chippenham Parkway, is a state road). The mayor wants Chesterfield and Henrico to keep their promise to help fund a new stadium, but he also doesn't want to lose his grip on the $62 million he just received.

Delegate Manoli Loupassi, a Republican from Richmond who also represents parts of Chesterfield County, introduced state legislation that would equalize the authority's board, giving Richmond, Henrico and Chesterfield three seats apiece (adding one seat from Hanover County). The bill is nothing new, and has been introduced before, but it typically has died in the state Senate, at the hands of Richmond Democrats. With the Republicans in power, it seems more likely to pass. 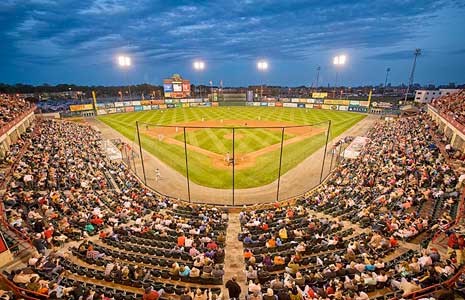 Loupassi, a former Richmond City Council president, says he doesn't get the opposition to equalizing the board. It should foster regional cooperation, he says.

"Name one time in 50 years where two jurisdictions ganged up on another to do something crazy? It doesn't happen and it's not going to happen," Loupassi says. "The strongest argument the city had was, 'Hey, they owe us $62.3 million.' That's been paid."

And here's the kicker: The city wants regional cooperation on major projects, such as a new ballpark and a new Richmond Coliseum, but doesn't want the counties to have equal say on the only true regional political body.

A couple of weeks back, Loupassi says, he had coffee with City Council President Kathy Graziano and Dan Gecker, chairman of the Chesterfield Board of Supervisors. Gecker told Graziano it was simple politics, Loupassi says.

"He told her flat out, 'Look, this is a very difficult issue for us. And until [the RMA Board is] equalized, we're not going to be in a position to participate in these regional needs, these regional projects. It's just flat-out the case," Loupassi recalls. "We're not giving you a dime until we have an equal seat at the table."

Where does this leave the Squirrels? In the cross hairs of a heavily one-sided political battle (remember, only the mayor and City Council are up for re-election in November). At the very least, it doesn't bode well for a frustrated baseball team that desperately wants to play in a new ballpark.

DiBella reiterated last month that the Squirrels are committed to staying in Richmond for another two years, despite the lease dust-up.

Still, it's difficult to commit to the uncommitted.

"I'm in a weird quandary. I just pulled my pants down and said, 'I'm not going anywhere' to the public," DiBella says. "I don't like it." S