Tom Cruise burnishes his own unapologetic legend in “Top Gun: Maverick,” while making his personal obsessions our own.

In the acclaimed new "Top Gun" sequel, which features even more square jawlines, the ageless Tom Cruise looks to physicalize dad-rock nostalgia in the skies.

Tom Cruise’s stardom is built on an oxymoron. Cruise is so cheesy and eager to please—so all-American, ageless, committed, gung-ho and perfect, according to the rules of a fading machismo—that he scans as deeply weird. And when he’s on his game, quite intentionally funny. Said weirdness, signifying a sense of need despite his stratospheric success, somehow renders him relatable.

In other words, Cruise is so fake he’s real, reflecting our insecurities and our media-inoculated fantasies of success back to us.

From the late ‘80s through the early 2000s, back when he worked with auteurs, Cruise showed a surprising willingness to interrogate his image as a damaged action-man. These days, Cruise is all about burnishing the legend, working with talented yet comparatively anonymous people who will not complicate his prerogatives. Shrewd showman that he is, Cruise is still selling a certain brand of neurotic vulnerability; as a ‘80s-‘90s superstar who refuses to fade away, who can still command an expensive tentpole sequel, he is both king and underdog.

There’s something increasingly quixotic about him, an analogue man in a digitalized world who thinks you can still build a hit out of practical effects and unfashionably overt military propaganda. This gamble, physicalizing dad-rock nostalgia, is the driving point of “Top Gun: Maverick.”

Given that it is a decades-late sequel to a critically reviled movie, “Top Gun: Maverick” has received astonishingly positive reviews. A. Because critics are far less discriminating than they used to be and B. Because most of them, however they may pretend otherwise, are subject to nostalgia and the various forms of movie-star manipulation outlined above. Nevertheless, every review I’ve read opens with the obligatory reminder that 1986’s “Top Gun” epitomized Reagan-era values, especially a fantasy of the American military as an uncomplicated force of good that turns boys into men. That is true, but there’s an “eating your vegetables” quality to these frequent reminders, which are to be gotten over before critics admit that the dogfight scenes in the new movie are amazing, and that Cruise himself is at the apex of his ludicrous-yet-intensely-effective star power.

Before we rap the “Top Gun” movies on the knuckles for sanitizing warfare, which they do to a barely forgivable degree, let’s take a moment to recognize that many American pop movies do the same. What are the Marvel products but soul-crushingly dull symbols of intergalactic (read: global) warfare that means and costs absolutely nothing? Ditto the “Star Wars” movies. Impersonality, digestibly bloodless violence, sexlessness, and dialogue studiously scrubbed of any human eccentricity rule the roost in the modern pop film, so why are we singling out “Top Gun: Maverick?” Because it has a legacy foot in the Reagan age, and because it fetishizes real military hardware, burnishing its fantasy with artifacts of the real world, reminding us that our dreams of casual dominion have a cost that we should interrogate.

“Maverick” wants it both ways: It plays recklessly with issues of warfare in the manner of an over-the-top ‘80s movie, but it’s skittish in a modern fashion. I’m not going to pretend that the first “Top Gun” isn’t a lousy and ridiculous movie, but I missed its crassness while watching “Maverick,” which is otherwise superior to it. “Top Gun” is a sexist, entitled male debauch, in which a raging asshole fighter pilot is celebrated for doing whatever the hell he wants. Cruise doesn’t shy away from Navy fighter pilot Pete “Maverick” Mitchell’s narcissism, perhaps because he didn’t, at that time, even have the instinct to see it as a bug. The locker room scenes have an unruly, politically incorrect eroticism that is punctuated by the big-dick shots of all the fighter jets swooshing around in the air to synth music and cut-rate songs that are still remembered today. Boomers and Gen Xers miss ‘80s crap because it doesn’t apologize for itself, which feels dangerous and nearly subversive in an age in which a celebrity must desperately apologize for a tweet lest he get cancelled.

Cruise and his director Joseph Kosinski, as well as a host of screenwriters who include current “Mission: Impossible” maestro Christopher McQuarrie, sand down the locker room bullshit in “Maverick.” In the first “Top Gun,” there is an authentic sense of male anarchy being barely and disreputably harnessed by the government. In “Maverick,” one sees a lot of young actors working hard at being dangerous while trading barbs that wouldn’t raise an eyebrow from a middle school teacher. “Maverick” wants to bring back the ‘80s, but in a tentative, is-this-much-machismo-okay way. That’s the bad news.

The goods news is that “Maverick” is still very strange, and paced like greased lightening. One gets an idea of the film’s casual lunacy immediately, when Maverick is revealed to be living in the Mojave Desert in a hangar, sleeping with his pet jet and a host of pictures with former wingman Goose, who was famously killed in the first movie. Right around this time, Cruise treats us to a glamour shot that’s so contrived it’s both absurd and awesome: polishing his jet, he flexes a bicep and shows us the muscled contours that are barely contained by a tight white t-shirt. It’s as if Cruise saw Megan Fox in “Transformers” and was gripped by lust … for himself. I don’t blame him: Pushing 60, Cruise can still make this 42-year-old wish that he would commit to losing 20 (okay 30) pounds and begin his morning ritual with sit-ups.

Cutting to the chase, Maverick is still a, well, maverick; a legend who has never risen the Navy ranks because he’s a daredevil addicted to the rush of the skies. On his way to dismissal after destroying an experimental aircraft, he’s saved by ailing former rival Iceman (Val Kilmer), now an admiral who orders his old friend’s return to Top Gun school to train new hotshots for a mission that bears an uncanny resemblance to the quest in the first “Star Wars,” except in an unnamed country populated only by masked fighter pilots. This assignment affords Maverick the opportunity to exorcise various demons he shares with Rooster (Miles Teller), a gifted pilot who’s also the resentful son of Goose.

Cruise used to specialize in sons who had to transcend daddy issues in order to fly that plane, make that cocktail, or win that court case involving a few good men. But now, as in “Minority Report” and “War of the Worlds,” which feature perhaps his finest performances, Cruise is dancing with the burdens of being the father. Yes, he finally flirts with playing a tarnished sage, a possibility that is, of course, discarded when “Maverick” reveals, in true contemporary Cruise-movie tradition, that his character is the only person to lead a team to destroy the Death Star, um, uranium mine. 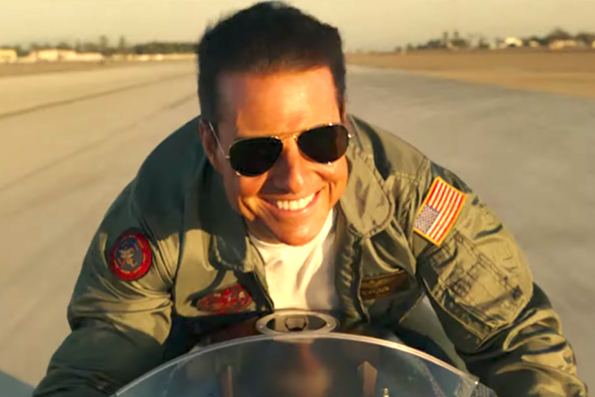 Maverick wrestling with his legacy and obsolescence obviously mirrors Cruise’s crusade to remain a box office draw, just as Ethan Hunt’s quests to save the world in the recent “Mission: Impossible” sequels parallel his exertions as the most death-defying man in show business.

Where Tony Scott’s direction of “Top Gun” was bombastically cut-and-paste, Kosinski’s is classical. Compared to most modern blockbusters, which are over-crowded, over-plotted, and overlong by at least an hour, “Maverick” is a remarkably lucid and propulsive piece of work. No scene drags (in fact, moments are frequently nipped in the bud prematurely), the plot is elemental, and the action scenes are models of visceral cause-and-effect coherence, particularly the truly exhilarating climax. It would be tempting to call the film efficient to the point of impersonal, but that raises a Cruise paradox.

The movie’s streamlined, polished professionalism, with no violence that stings, with no relationship that’s complicated, suggests, as the recent “Mission:Impossible” entries do, a devotion to craft-for-its-own-sake so extreme it’s anxious. Cruise will do his own stunts (damnit), he will make the most entertaining blockbusters (damnit), you will see them in theaters (damnit, and, damnit), you will not learn one thing about him that he doesn’t want you to know. “Maverick,” especially in its final preposterous (and moving) act, suggests a fantasy that its protagonist might’ve had one night while passed out at a bar, a fantasy of going back and editing the ledgers of his own life. This could also be Cruise’s fantasy.

Which is to say that the film’s distrust of extraneous, revealing, potentially challenging or eccentric details is its personality, and that “Maverick” renders impersonality positively narcotic. Critics may not admit it, but it’s gratifying to eat junk food and watch propulsive genre movies. The problem has been that most modern pop cinema hasn’t been good enough to even clear that highly qualified bar.

In “Top Gun: Maverick,” Cruise makes his pat yet haunted obsessions our own. His devotion to a vague storybook America is more real than tedious, tarnished, gridlocked reality, as he has become a master of encouraging his audience to share in his self-pacification. That’s scary and deeply poignant.