If you Google “Dropout Factory” the magic of the Internet will teach you that Richmond Public Schools are exactly that. 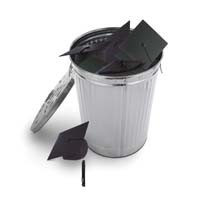 Virginia Secretary of Education Gerard Robinson recently dared me to come up with a bold plan to challenge the educational status quo in Richmond.

OK, maybe dare is too strong a verb. On the other hand, the situation is urgent. Recently the administration of Mayor Dwight Jones trumpeted its claim that “72 percent of [our city's] economically disadvantaged students [are] graduating on time.” Is the mayor privy to some revelations he's failed to share with the rest of us?

If you Google “Dropout Factory” the magic of the Internet will teach you that Richmond Public Schools are exactly that, based on the research of education professionals who take pride in their professional reputations. They use the term because it seemed the only fair way to describe what was happening in Richmond and other communities across America with comparable statistics.

If there's an objective, provable study to support the 72 percent claim — the national Editorial Projects in Education Research Center reports Virginia's overall graduation rate is 69 percent; 55 percent for African-American students statewide — then the mayor, the school superintendent and the School Board need to stop keeping it a secret.

When white segregationists ran the Richmond Public School system while the mayor was a youngster in Philadelphia, they relied on bogus educational statistics to justify the unjustifiable as the U.S. Supreme Court found in the historic Brown v. Board of Education case. This isn't to claim that the same thing's happening now. But it's an absolute fact that back then Oliver Hill was willing to sue; J. Sargeant Reynolds was willing to challenge the old divide; the Richmond Crusade for Voters wasn't afraid to challenge the political establishment; and a future state senator named L. Douglas Wilder was already thinking about how Virginia needed a compulsory education law.

Who are their counterparts today?

But Secretary Robinson says he isn't going to be a potted plant on top of a stack of misleading educational statistics. Actions speak louder than words. So here are three actions he can take right now:

Democrat McEachin and Republican Loupassi are in the vanguard of a new generation of elected leaders in Richmond. They can be trusted to get the real facts. When they do, let's hope the conscience of Richmond finally will be aroused.

Given the state constitution, we need to remember Churchill's advice: If the least worst option is the best you have, then you take it. Right now, the School Board has been able to block needed change because of the power given it by the state constitution. Contrary to conventional wisdom, there's no requirement in the state constitution that Richmond have only one school board. Rather, “subject to such criteria and conditions as the General Assembly may prescribe” the State Board of Education has the power to create two or more school divisions in Richmond if it believes this is the best way to meet the state's educational responsibilities.

The current system has produced a dropout factory papered over by phony statistics. Every objective observer has said as much. The problem has outgrown the current School Board structure. True, a different membership could change things. Yet it isn't happening. The children can't wait. Given the political obstacles and the state constitution, it's not easy to force the old guard to change.

Admittedly, creating three elected school boards is not my first or even third choice. But it does provide a constitutional way to challenge the status quo. For example, one school board could be responsible for the high schools, another could oversee underperforming middle and elementary schools, with the current School Board allotted the rest and retaining the right to pick the superintendents for all the districts.

Face it: The current School Board structure has failed generations of students but it serves the political establishment's needs so there is no true pressure for real change. Maybe dividing the schools between two boards makes more sense. We need to shake up the system and the state constitution makes it hard to do it fast, if at all. At least it's an option if all else seems impossible.

3. Lead a national effort to enact the proposed school modernization and revitalization tax credit, already supported by U.S. Sens. Jim Webb and Mark Warner and Rep. Eric Cantor, among others.

If passed, school systems such as Richmond's could use historic tax credits to build new schools and save millions. Right now, the elected leaders of Richmond are prepared to waste potentially hundreds of millions in precious tax dollars, not to mention forfeiting millions in scholarships that could otherwise be made available to city school graduates. Why? Because they won't even hold a news conference urging passage of the federal rehabilitation tax credit plan. The very idea of using such tax credits to modernize old school buildings is based on the rehabilitation of the city's Maggie Walker Governor's School, now one of the best public schools in the country.

So there it is Mr. Robinson. Challenge accepted.

Paul Goldman is a longtime Democratic strategist who worked on the gubernatorial campaigns of Doug Wilder, Mark Warner and Tim Kaine.