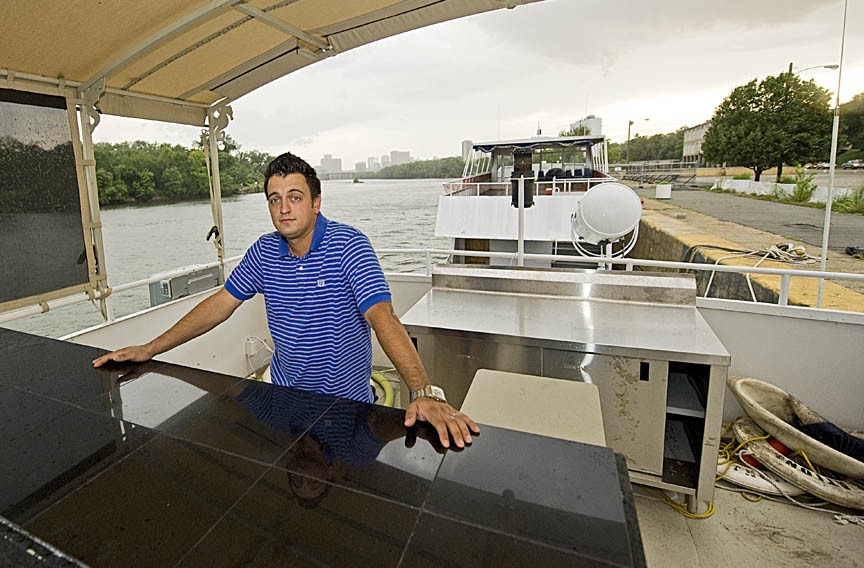 After running aground in Norfolk and sinking in Richmond, Celebration is a boat with nine lives.

Moored at the city dock near Rocketts Landing, the 78-foot-long boat is set to become a floating restaurant called Flathead's, opening later this month. Matthew Gleason, former operations and sales manager of the Bull and Bear Club, will head the eatery, serving American fare such as hamburgers, hot dogs, chicken and assorted seafood.

The boat's hull has seen quite a bit of history. Celebration's previous owners lived on the boat with five dogs and two cats. When a storm kicked up in 2009, the boat ran aground in Norfolk, damaging its propellers and transmissions.

Local developer Louis Salomonsky bought and still owns boat, refurbishing it for use as a floating restaurant. Last summer, Poe's Pub owners Mike and Jennifer Britt were days away from opening their restaurant Mallory on the boat when Hurricane Irene hit. The storm sunk the yacht, along with the Britts' plans.

Mike Britt says the boat was uninsured, and he and his wife lost between $30,000 and $40,000 in the endeavor. The boat was filled with mud and eels, and had to be refurbished again.

Gleason, who serves as manager, owner and operator of the restaurant, describes the work as tantamount to rebuilding an entire boat, save for the vessel's structure. He doubts his venture will suffer a similar fate, saying that precautionary measures will be taken during inclement weather — and that insurance is in place.

"That's definitely a fear of ours," Gleason says. "A lot of [the sinking] was errors. As long as we take those errors out of the equation, we should be fine."