Float On: Why Sensory Reduction Therapy Is Just the Thing You Need Right Now 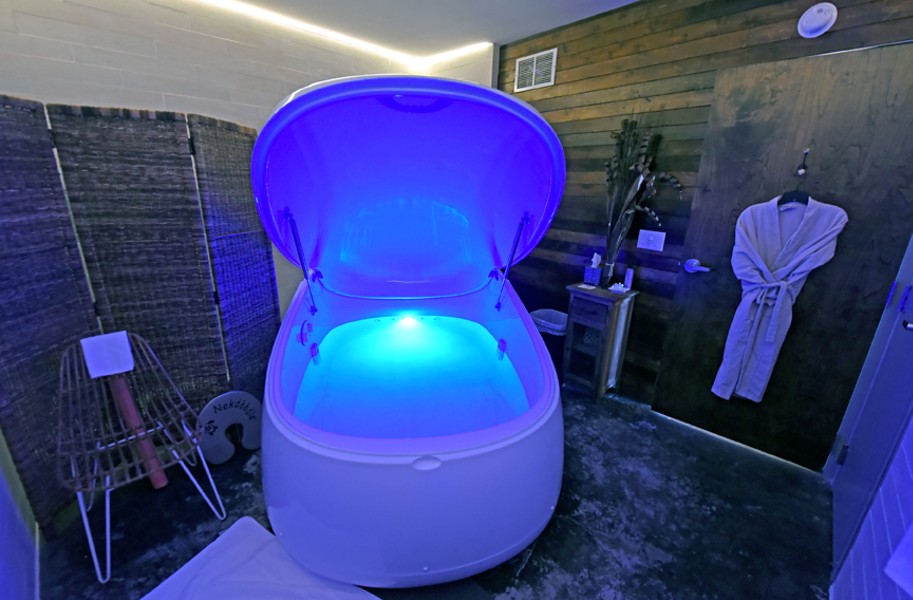 Scott Elmquist Mother’s Womb is one of two floatation tanks at Vitality Float and Spa. The other, larger tub room, which our writer used, is simply called the Room. Both feature private rooms.

My body feels weightless, gently rocking in body-temperature, salt-water solution. A thousand pounds of Epson salt have been added to create the sensation of floating freely in space, while hundreds of tiny bubbles fizz under my back.

Staring up at the 7-foot-high ceiling, I’m thinking this is the closest I’ve ever been to outer space, when about 20 minutes into my 90-minute scheduled immersion, the soft new age music fades away and I turn off the blue light for complete darkness.

There’s no claustrophobia for anyone worried. The large oval door doesn’t lock and easily can be pushed open at any time. I realize that I need to stop thinking about how I’m going to write about this experience and let my neck muscles completely relax. That's when I listen to my heart beat steadily underwater and soon, an old memory flashes forward that I haven’t had in 35 years.

My first float therapy session comes in the immediate aftermath of the contentious election season. Vitality Float Spa owner Kenzie Korman says she received more clients signing up about the same time. Apparently, others also feel the need to scrape the metaphoric muck from their souls.

Dreamy-eyed and calm, Korman is a specialist in massage cupping and recently opened a shop to add sensory reduction therapy to her masseuse work. Located in a vine-strewn building next to Cask on Robinson Street, the new business features two private float rooms where you can relax inside an egglike pod called Mother’s Womb, or a larger, high-ceilinged tub simply named the Room, where my 6-foot-1 frame fits nicely.

“The internet and technology boom has led people to spend less time on themselves and really understand how they feel in the moment,” Korman says. “So mindfulness and meditation are starting to hit. This is really kind of a quicker way to ease into meditation. You can get to an extremely deep state.”

Roughly two years ago, when Korman began renovating her building — which the previous owner told her was a barbershop decades ago — there were no other local float businesses. Since then, three others have popped up across the area.

Float therapy has been around for years, but its increase in popularity has led to scientific studies showing its pronounced effects on the brain’s amygdala region, where “flight or fight” response originates. The area gets shut down, basically rivaling certain prescription drugs used to reduce anxiety and post-traumatic stress.

Local athletes and musicians have been using the service, Korman says.

“Musicians love it because it helps them work out stuff. It’s great for super-learning, or putting your mind to certain projects and visualizing them,” she says. “It’s like nervous system exercise: The gravity is taken away from your body so your own mental capacity can expand.”

Which brings me back to that old memory: It involves a classic wooden marionette owned by my neighbors in the early 1970s, probably the first toy I ever played with as a child. I recall how the character could seem so alive, controlled by the right hands, and how it fell limp when the strings were let go, collapsing into rubble of akimbo limbs. That’s pretty much how I feel in the tank. I’ve let my aching knees and worries drift away and my mind roams freely, wondering where its puppet master went.

Then, just when things start getting good, the recorded voice of a woman tells me that my time is up. It felt like 30 minutes instead of 90. I take a quick shower in the private room to wash off the salty water. My skin feels awesome.

But I really don’t notice the full effects until the next 24 hours. My muscles feel loose, especially around my neck where I usually hold tension. Not only that, I’m supremely relaxed and feel more mentally clear. It seems to work and I can’t imagine what regular use might accomplish.

Don’t believe me? When I get out of my float session, I drive straight into dark and cold 5 p.m. traffic on my way home, past the usual horrible Richmond drivers — distracted, not using signals, driving too slow or too fast.

And I didn’t call anyone a stupid, motherf---ing ass hat once.

1. The longer you stay in, the more you get out of the experience.

2. Don’t rub your eyes or let the salty water in your mouth. But if you do, there’s a handy water spray bottle nearby. Know where this is at all times, even in the dark.

3. Don’t be stressed about claustrophobia or the cleanliness of the water. A FAQ page at vitalityfloatspa.com has information. You’ll see that the water is filtered three times between each float.

4. While immersed, listen to your body a while. You’ll be surprised at what you can hear and feel. And then let your mind go where it wants to go.