Courtesy of VMFA "My Winter Count," (1999) by artist Lynne Allen (Sioux/Euro-American, born 1948), a silkscreen and lithograph. Virginia Museum of Fine Arts, National Endowment for the Arts Fund for American Art.

Regardless of their tribal affiliation, Native American lives are linked by the common oppression of their culture by outsiders.

“Don’t Shoot, Diego!” a 2015 lithograph by Cochiti artist Diego Romero, reimagines the past in comic book style, while also referencing actual history. The doctrine of discovery, written in 1493, was central to Spain’s conquest of the New World. Its premise was that any land not inhabited by Christians was there to be discovered and claimed and its people forced to convert to Christianity or be killed.

Romero brings home the doctrine’s intent by imagining the conversation between three Spanish soldiers, all with guns, one of which is still smoking from having just killed a Native man. Two Pueblo women cower in the doorway of their home with the body of the man sprawled across the ground in front of them, dead. One soldier says, “Don’t shoot, Diego!” to remind the others that their purpose isn’t simply to invade foreign lands to kill their inhabitants, but to claim the souls of the inhabitants by forcing them to convert. It’s a chilling message, all the more so for being told in comic book style.

Cherokee artist Shan Goshorn’s “Shrouded in Grey” is a single weave basket that uses Arches fine art paper instead of the more traditional white oak or river cane for the horizontal elements of the weave. Printed on the paper strips are excerpts from Raphael Lemkin’s definition of genocide, the Indian Removal Act of 1830, the Medicine Lodge Treaty of 1867, and the names of the children from the 1879-1918 Carlisle Indian Boarding School student roster. Reading the words forces viewers to absorb the reality of genocide and loss, not just of life, but also of land and culture.

“Some of Us Say,” a lithograph by Navajo artist Melanie Yazzic employs a collage effect that scatters across the paper English phrases -a reminder of cultural blending- with the equivalent Navajo words. It’s a potent reminder that European languages weren’t the earliest ones spoken in North America, but perhaps even more importantly, that English words don’t always accurately encapsulate major Indigenous concepts such as tradition and belonging.

A map of North America shows the locations of the artists’ ancestral homelands, which range from the East Coast to the Midwest to the Southwest and nearly to Alaska, a sobering reminder of the extent of genocide and cultural oppression. Downstairs in the museum’s library, a companion exhibit, “Untold History,” features a collection of Indigenous artists, comic books and graphic novels that further comment on a Native American history with which many of us are unfamiliar.

The humor of Tlingit artist Larry McNeil’s 2004 lithograph, “Native Epistemology,” uses the Lone Ranger and Tonto as its springboard, transforming Tonto from the Lone Ranger’s less educated but loyal companion into an Indigenous intellectual. “Keemosabee, me no like say cheese for that White man Curtis … he want me to dress in paradigmatic duds that only extinguishes native epistemology,” says a cartoon-like Tonto astride his horse. Below the image, McNeil writes, “The Lone Ranger was taken aback by Tonto’s resolve and wondered what eepissedamollygee meant.”

Using sarcasm and humor, McNeil demonstrates just how little the hero, not to mention those who admired him, actually understood about Indigenous people and culture. Using the language of the colonizers of their land to tell their own stories, these Indigenous artists use words to play a powerful role in not only reclaiming a lost history but adding to an incomplete American narrative.

“Words Matter” reminds us that we could all stand to learn more about Native American history and not just in November. 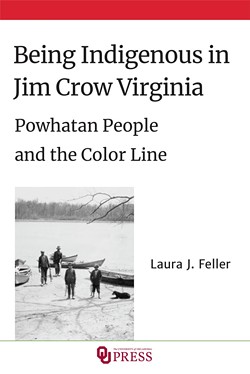 The Library of Virginia also turns its focus on Native American Heritage Month with a book talk about how Virginia’s indigenous people resisted erasure and built their identities as Native Americans. Author Laura J. Feller and Dr. Gregg Kimball, the Library's director of public services and outreach, will discuss Feller’s book “Being Indigenous in Jim Crow Virginia: Powhatan People and the Color Line.” The book focuses on the critical strategic work that tidewater Virginia Native Americans, descendants of the 17th-century Algonquian Powhatan chiefdom, undertook to sustain their Native identity while facing deep racial hostility from segregationist officials, politicians, and institutions. A book signing follows the talk.

“Being Indigenous in Jim Crow Virginia: Powhatan People and the Color Line” book talk will be held on Thursday, Nov. 10 at 6 p.m. at the Library of Virginia, 800 East Broad St. The event is free, but registration is required. https://lva-virginia.libcal.com/event/9744966