With different political backgrounds, a gun-owning rural couple wants to change the narrative around firearm legislation.

Given the polarizing nature of the debate, many weren't surprised when Republican legislators gaveled out without a single vote during the General Assembly's special session on stricter gun legislation, postponing it until after the November election.

The political stakes are high. All 40 Senate and 100 House of Delegate seats are up for grabs this fall. Republicans control both chambers by slim margins, and now, more than ever, says Kyle Kondik, director of communications for the University of Virginia's Center for Politics, the two parties seem "more ideologically sorted" on guns.

"The governor and the Republicans who control the state legislature have far different ideas about what to do or what not to do about guns," Kondik says. "It didn't feel like there was going to be some sort of grand compromise."

Kondik says voters will have a straightforward choice at the ballot box in November: Vote for the Republicans if you want to keep gun laws the way they are, or for the Democrats if you want stricter legislation.

But for some voters, it's not that simple.

Dustin Sordelett, who grew up in Prince George County and lives in the area with his family, was a devoted Republican his entire adult life until recent years. A self-proclaimed country boy, he's a gun owner, hunter and believer in the Second Amendment. But he also supports legislation such as universal background checks and red flag laws, or extreme risk protection orders that permit the court-ordered temporary removal of firearms from a someone believed to be a danger to themselves or others.

His wife, Robyn Sordelett, is a proud liberal and often the instigator when it comes to gun-related conversations in their home. She's an active member of the national organization Moms Demand Action for Gun Sense in America, and as a gun owner who freely admits to enjoying a day at the shooting range, she hopes to bring some nuance to the debate.

Robyn says she's "as close to a single-issue voter on this as you can be," and she exclusively supports political candidates who prioritize progressive gun legislation. But for her husband, it's a little more complicated.

Pulled toward the center by his evolution on the gun debate, and disillusioned with the current state of the GOP, these days Dustin says he identifies as an independent, which means there's no easy answer on Election Day.

"Because our system is so divided, I feel like you have to vote one of two ways," he says. "The independent vote is not a good vote, and that's just the current election cycle that we're in."

While a candidate's stance on gun reform is "definitely going to influence" his vote, he has a hard time envisioning himself going blue, and he can't say the issue alone is enough to make him cast a ballot for a Democrat.

"It's definitely a change. It's a gut check, it's a morality check," he says of his own internal debate between the two parties. "You start asking yourself questions you never thought you'd ask before. It's difficult."

Dustin never considered the laws connected to guns until 2007, when he was a student at Virginia Tech. On the morning of April 16, only one academic building stood between Norris Hall, where a gunman opened fire and killed dozens of people, and Whittemore Hall, where he and his classmates spent hours on lockdown in the basement.

"For me, it was absolutely a wake-up call," he says, adding that he doesn't like to sit with his back toward the door to this day.

His experience adds a level of credibility when presenting an unpopular opinion, he says, especially in his rural community. He acknowledges that he looks the part, with his plaid wardrobe, beard, country accent and propensity for hunting — and that level of relatability helps when he's challenging his neighbors, co-workers and friends to consider a different take.

"When you're one of them, when you're a gun owner and part of the crew or whatever, then they'll listen to it and they don't think you're coming at them in a politically close-minded kind of way," he says. "I'm phrasing it in a way that's not attacking them or the Second Amendment, but asking them, 'What about this? What if you were in this situation? What if your kids were?'"

For Robyn, it's not easy being a political outsider in her community — or, for that matter, being in the minority within the gun violence prevention world as a gun owner. But like her husband, she says she's had the most productive conversations with people she disagrees with when it starts from a point of commonality.

"There are folks who, just the same way that I secure my firearms in my home because I'm protecting my children, they don't secure theirs for the same reason. They want to protect their children, so they have them accessible," she says. "Where the communication breaks down is when we try to make decisions about each other without talking to each other."

Robyn channels her energy into gun violence prevention advocacy, and she's gearing up for the often unglamorous work of an election season. Moms Demand Action aims to show up and support candidates who have received the group's gun-sense candidate distinction, she explains, given to people who include gun safety and gun violence prevention in their platforms. In theory it's a title that can go to anyone running for office, she says, regardless of party affiliation.

"I look forward to the day that a Republican will get the gun-sense candidate distinction. I want that day. It matters to me," she says. "I could not believe more to my core that this is a nonpartisan issue." 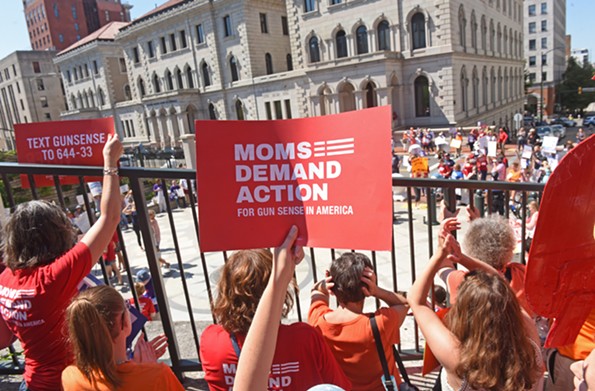 But for her, it's also about a culture dominated by certain stereotypes.

"There's a nuance here that we can't quite figure out a language to talk about," she says. "In America, in Virginia, in the South, we have somehow taken the idea of gun culture and conflated it with being an American, being a man."

She knows that the suicide rate among white middle-aged men, especially in rural areas, is on the rise. According to the National American Foundation for Suicide Prevention, white males accounted for nearly 70 percent of deaths by suicide in 2017, and just more than half the people who died by suicide that year used firearms.

Robyn lost her own father to suicide 12 years ago. He didn't use a gun, but she says societal expectations "ate away at him for years," and ultimately got the best of him.

Red flag laws are at the top of Robyn's legislative priority list. A study published in the Psychiatric Services medical journal in 2018 reveals that suicide rates in Connecticut and Indiana have decreased by 14 and 7.5 percent, respectively, since the states implemented extreme risk laws. Here in Virginia, even if she can't change the way her friends vote, she hopes she can at least change the narrative.

"At the end of the day, if you're not going to vote the way I want you to vote, if we're not going to agree on anything, my god, I hope you'll tell me if you're feeling suicidal and I'll hold your gun for a little while."