Richmond is getting a $54 million, high-speed bus line right down Broad Street. But do we need it? Here are the answers to seven questions you might be asking. Scott Elmquist The No. Six takes 35 minutes to get from Willow Lawn to downtown Richmond during rush hour. Planners say the Pulse will shorten that trip to 21 minutes.

The GRTC Transit System is finalizing a plan for a $54 million, high-speed bus line down Broad Street. Local transit advocates hope the project will be the beginning of a region-wide transit system that changes how people get around metro Richmond.

The new service promises to zip passengers from Rocketts Landing to Willow Lawn, making 14 stops along the way, shortening some trips by as much as 15 minutes.

But the plan, and its elimination of a large amount of street parking, has some merchants on Broad Street questioning whether this is something the city needs. Not even current bus riders are convinced it’s the best use of resources.

The project is in its preliminary engineering phase, but planners have set an aggressive deadline, aiming to have the system running in October 2017. That means debate over the project’s merits will only intensify in the next year.

Here’s what we know so far: 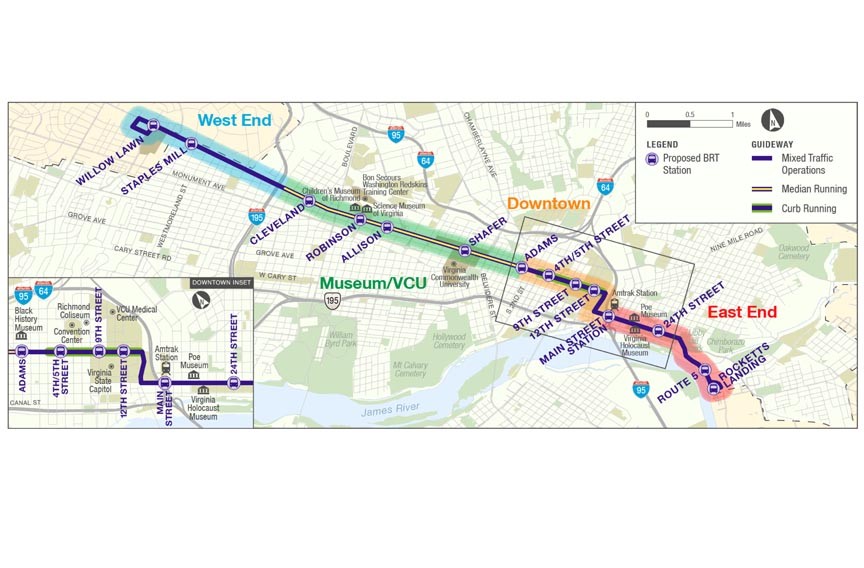 Bus Rapid Transit, which gets shortened to BRT, is a terrible name invented by transit planners to describe a bus service that operates like a light-rail system, only without the rails. GRTC has decided to call its system the Pulse.

Through a series of improvements over regular bus service, the system is expected to increase speed by about 65 percent, shortening a trip between downtown and Willow Lawn from 35 minutes to 21 minutes.

Along most of the route, the system will run in dedicated lanes. Technology installed on the buses will give them priority at traffic lights. The buses won’t be able to suddenly turn a red light green, but if a bus is approaching, the signal will stay green longer to let the bus through.

The system also moves faster because it stops less frequently. Unlike the current route that services Broad Street and stops roughly every block, only 14 stops will be spread along the seven-mile route.

The stops are treated like stations. GRTC has designed big, permanent structures for passengers waiting to board. Riders will buy tickets before boarding, which further reduces delays at stops. Buses will dock with stations and the platforms will be at the same level as the entrance to the buses.

Another element that differentiates the service is frequency. Unlike less frequent local bus service, the system will run every 10 to 15 minutes. Wait times will be displayed in real time at the stations.

2. Why not install a light-rail system?

They’re expensive. The seven-mile light-rail line that Norfolk opened in 2011, called the Tide, cost $318 million to build. A 2008 study of options for the Richmond area estimated that it would cost a similar amount to build a light-rail line along the route of the Pulse.

The Pulse is expected to cost $54 million. Citing successes in other cities, such as Cleveland, GRTC promises it will deliver the same benefits of a light-rail line.

The city secured $24.9 million in federal transportation funding for the project. The state is putting up another $16.9 million. The city has committed to covering $7.6 million and Henrico County is picking up the remaining $400,000. GRTC anticipates that once the project is up and running, it will cost $2.7 million annually to operate. GRTC says fares will cover about 20 percent of that. The state will cover another 24 percent, with Richmond and Henrico County covering the remainder through their annual budgets. 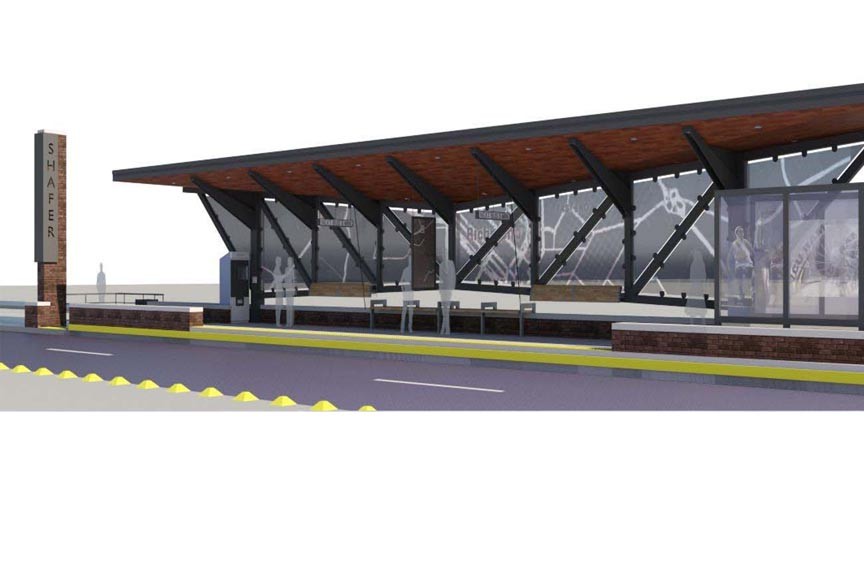 4. Why is this something the city is pursuing?

Proponents of the project — among them, Mayor Dwight Jones — view the Pulse as the beginning of a more comprehensive regional transportation system.

“We have a very dysfunctional system of transit, and we’re disconnected from the region,” Jones says. “So it’s really exciting, because in my estimation, it provides the framework for the beginnings of regional transportation in the region. I can’t speak for Henrico County, but I think once BRT is up and running, people might see the wisdom in letting it go to Short Pump.”

In making the case for the line, Jones cites a Brookings Institute study that ranked Richmond 92nd out of 100 metro areas studied for their transit systems.

Jones says he also views the project as a key element of his anti-poverty initiative. He says it has the potential to connect more residents to jobs more efficiently. He also notes that the line is expected to stimulate economic development and boost property values along the corridor.

Independent advocates, such as the nonprofit RVA Rapid Transit, echo Jones’ position. They hope to see similar lines that travel into Chesterfield County, the city’s East End and to the north. “This is the first step,” says Ebony Walden, a spokeswoman for the group. 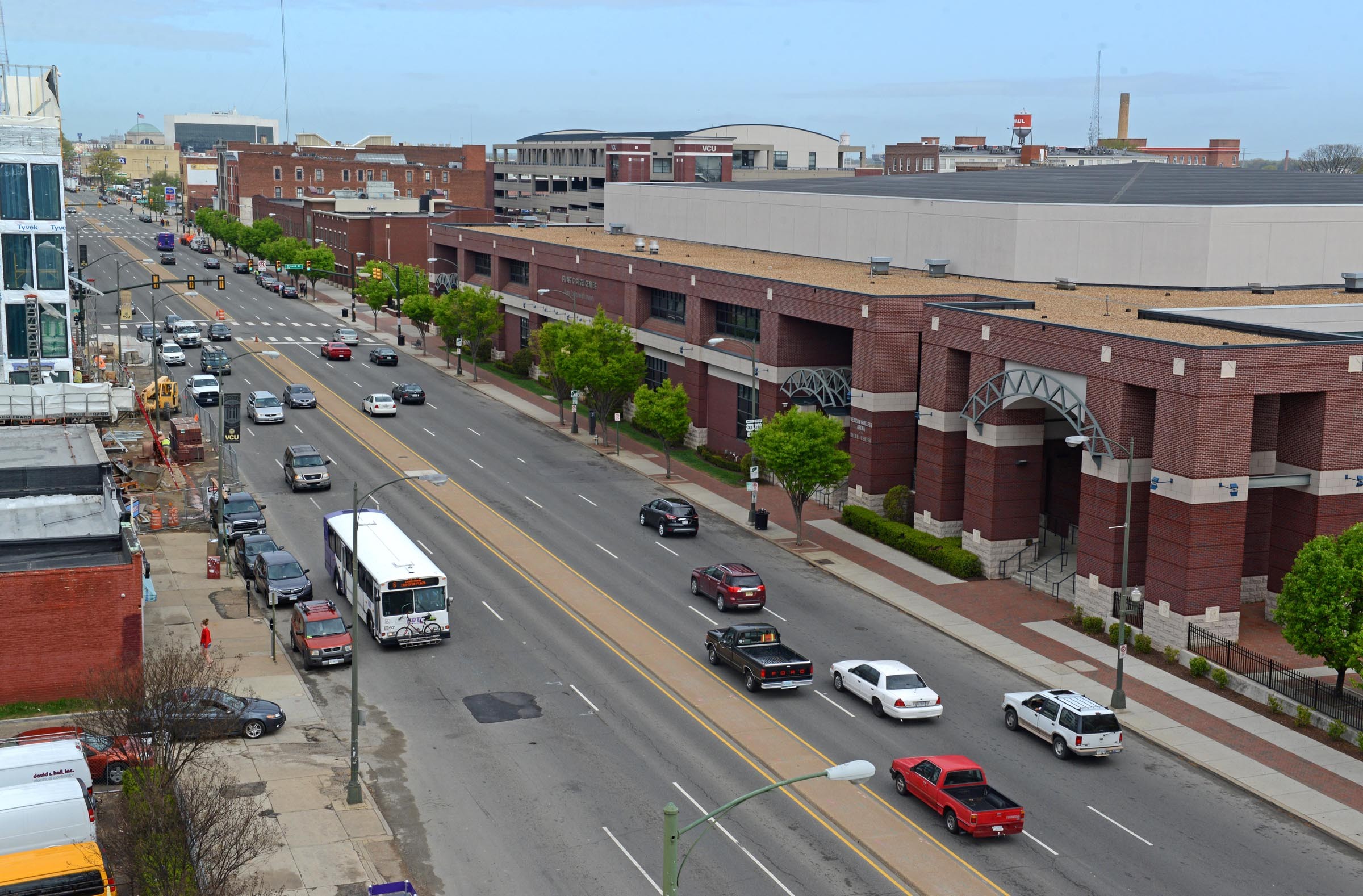 5. How will it address poverty and access to jobs if buses already go to all these places?

In and of itself, the system won’t.

Critics correctly note that it’s already fairly easy to get from Willow Lawn to downtown riding a bus. The No. Six line takes about 30 minutes, and buses run every 10 minutes during peak hours and at least three times an hour at off-peak travel times.

There’s some awkward tension between the stated goal of lessoning poverty and the design of the system. The Pulse, through its branding, is designed specifically to appeal to choice riders — that is, people who can choose between riding a bus or driving their cars. That’s opposed to captive riders, whose transit options are confined to the bus and will take whatever service is offered. GRTC boasts that people who ditch their cars in favor of riding the Pulse up and down Broad will save $816 a year in transit costs.

That’s not to say it won’t improve the system for both current and new riders. On the Six, riders surveyed randomly by Style mostly weren’t aware of the proposed changes. When they heard the plan described, they were generally supportive. But many also questioned why the city would focus so much on one route that’s already simple to use when there are so many other places that GRTC could focus its energy.

“I don’t have any complaints with this bus,” says Travis Bradley, boarding at Willow Lawn to get home from a construction job. “My issue is the bus just doesn’t go certain places.”

Councilwoman Ellen Robertson, who represents downtown and the East End, says that while she supports the project, in its current form it does little to improve transit access for her constituents. She says she thinks more lines will be needed, and soon.

To that, transit planners say: Just wait. In June, they intend to release their plan for reorganizing the city’s bus routes. The hope, according to Jones’ poverty czar, Thad Williamson, is to improve transit service across the city by using Pulse stations as hubs. 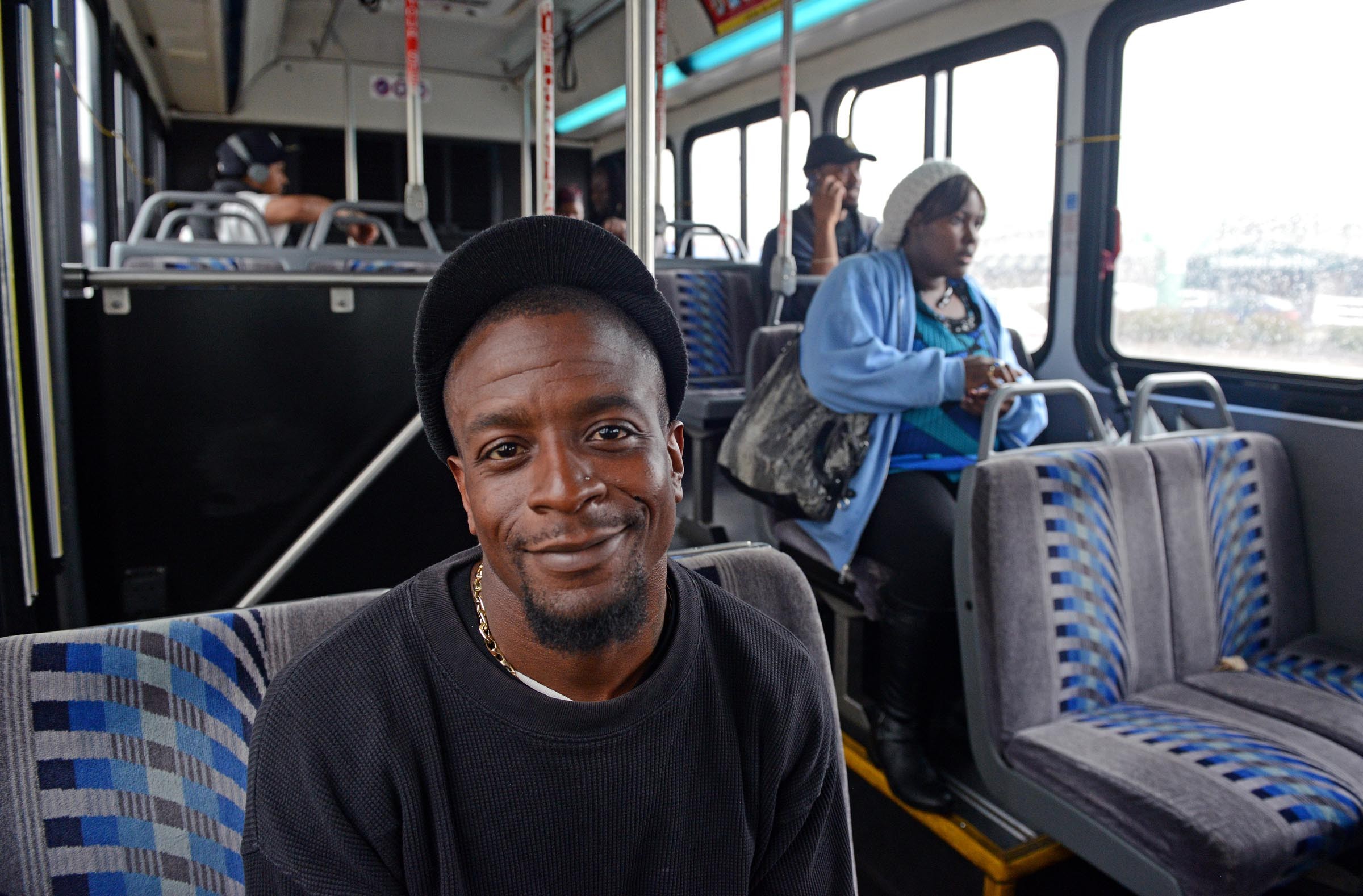 6. Why Broad Street? Why Willow Lawn? Why Rocketts Landing?

Beginning in 2008, transit planners zeroed in on Broad Street for a couple of reasons. The local bus line that serves Broad, the No. Six, is the transit company’s most popular.

GRTC and city leaders think the corridor it serves already has the population and job density to support more frequent service. GRTC spokeswoman Carrie Rose says the area is ripe for more development, and the intention is that the Pulse will spark that.

But why does it go to Rocketts Landing instead of, say, Church Hill or the airport? And why stop at Willow Lawn when you could go all the way to Short Pump?

Planners say they selected the route’s eastern terminus, Route 5, because it allows the system to be expanded farther to the east in the future, as opposed to Church Hill, which essentially would be a dead end. The airport is outside the scope of the initial phase. But transit advocates hope to establish service there in the future.

And Willow Lawn is just a start, planners say. The ultimate goal is to extend service to Short Pump. The 2008 transit study conducted by the state Department of Rail and Public Transportation suggested phases — the first to Willow Lawn, then to Short Pump by 2031.

Todd Eure, Henrico County’s transportation development director, says the county is looking into extending bus service to Short Pump from Willow Lawn with a local route that would act as an extension to the Pulse. GRTC estimates that would cost the county between $600,000 and $1.8 million annually, depending on the frequency and hours the service is offered.

“This is a big first step,” Eure says. “You can’t go from virtually no service to having BRT level of service without developing some level of ridership first.” 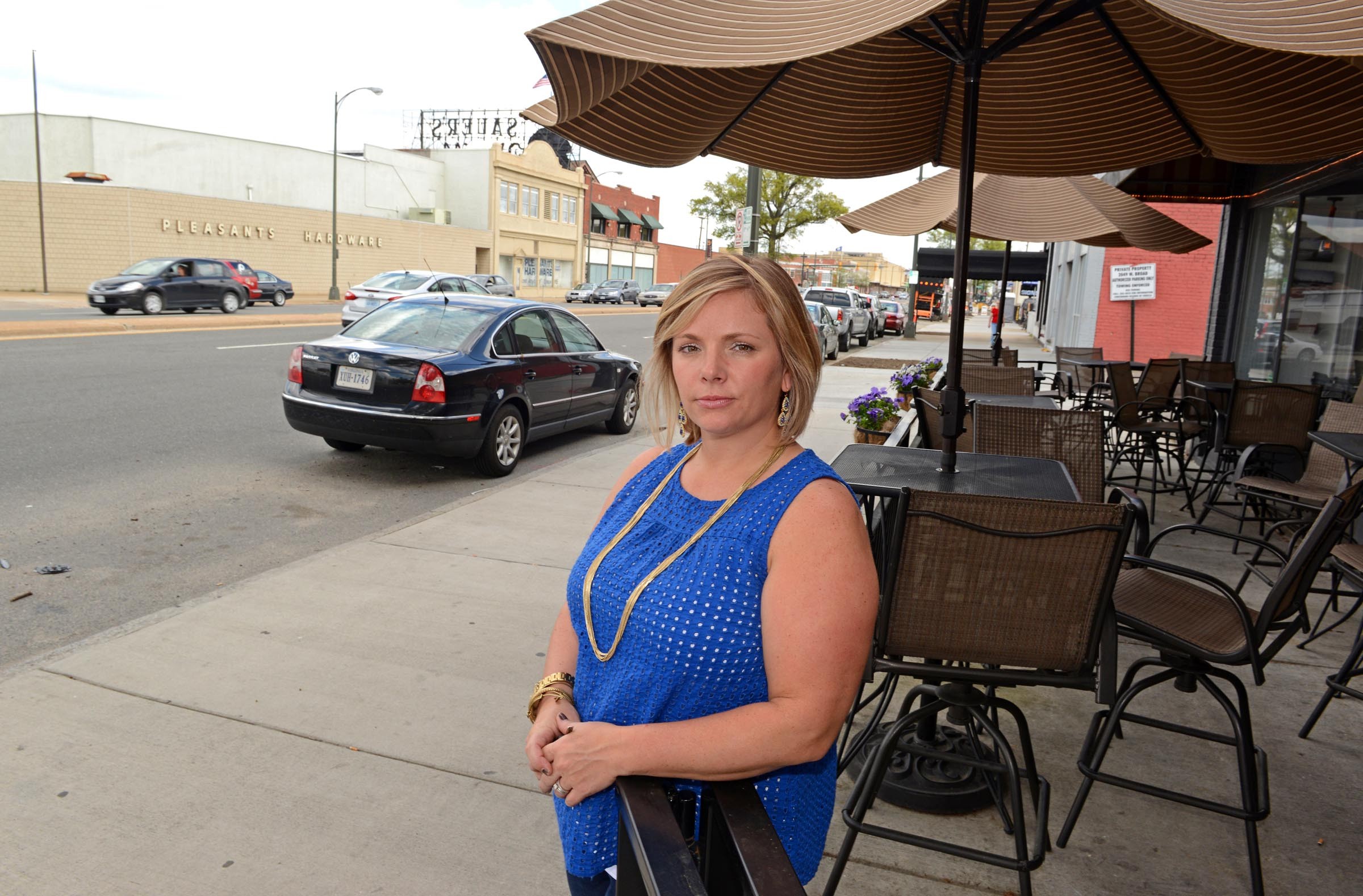 7. Why are business owners so unhappy?

Not everyone’s on board with the project.

“I think everyone admits that, yes, we want a better transit system in Richmond,” says Jamie Bohdan, who owns the Savory Grain, a restaurant across from Pleasants Hardware and Lee’s Famous Recipe Chicken. “But why are we spending $50 million in tax money that needs to be going so many other places in this freaking city than a stupid bus lane? Help us out here, people. It’s ridiculous.”

Business owners up and down Broad have expressed concerns. Most of them are worried about a reduction in on-street parking spaces, which they say will cripple their businesses.

The plan initially called for the elimination of all on-street parking spaces on Broad between Interstate 195 and downtown. Planners have since changed the design of the bus lanes so that only 250 spaces are lost.

But that didn’t do much to calm business owners at a recent public meeting on the project. City Councilman Charles Samuels, who represents the Fan and an affected portion of Broad Street, says the feedback he’s received has been almost entirely negative. Councilman Jon Baliles, who represents the West End, says he’s also heard concerns from constituents. Both say that while the project needs to be tweaked in some places, they’re encouraged that GRTC has been responsive so far to issues that business owners and residents have raised.

It’s worth noting that not all business owners along Broad Street are opposed. Local businessman Jim Ukrop appeared at the recent public meeting to defend the plan, saying he believed it ultimately would increase property values along Broad Street: “You’ve got to put on your vision caps, people.”

And at public meetings, opponents have been in the minority, with many supporters attending to inquire about other aspects of the project, such as interconnectivity with other routes, station placement and pedestrian issues.

“Richmond has become a dynamic city,” Jones says. “It’s a city that’s changing right before our eyes. We’ve got to build to the change. So the old notion of being able to pull up to your job, pull up to the place you’re going and have a parking space — a big one, right in front — is not something that’s going to be in the future. We’ve got to evolve.” S