The co-founder of Happy Trees in Scott’s Addition offers advice for newbies. 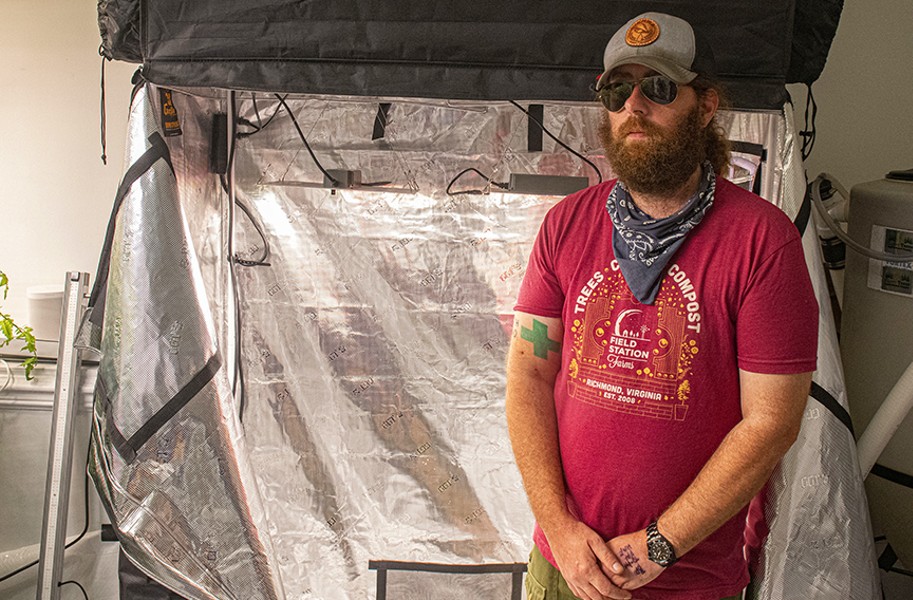 Scott Elmquist Chris Haynie, co-founder of Happy Trees Agricultural Supply in Scott’s Addition, advises newbies to start by growing cannabis indoors because of the many outdoor challenges in Virginia. He’s standing in front of a starter enclosure tent sold at his store.

Chris Haynie is co-founder of Happy Trees Agricultural Supply, a retail store in Scott’s Addition that specializes in hydroponics and indoor gardening.

At any given time of the workday, the small, jam-packed store is humming with folks passionately discussing the complicated science of indoor gardening. Happy Trees’ stated mission is to help customers learn to grow responsibly and successfully. Haynie has years of experience as a commercial grower in Northern California.

“Someone brought their grandmother in today who said she couldn’t wait the nine more days to go [to legalization],” says Haynie, who has a nearly finished tattoo of the balanced chemical equation for photosynthesis on both his biceps. “She said, ‘I haven’t done this since I was a hippie in San Francisco in the ’60s.’ She was super-excited.”

Style Weekly met with Haynie to learn the basic steps for the average person to get started growing marijuana indoors. Again, remember: Growing up to four plants becomes legal this week on July 1 (please don’t send us scolding letters).

Haynie advises newbies to grow indoors for their first round because outdoor growing in Virginia can be challenging. A former hemp farm director, he says that he got his “ass kicked” last year by all the rains and mold, even the caterpillars were bad. “Even if everything goes well, you’re at the mercy of Mother Nature and we get a lot of those late fall tropical storms that could blow your whole plant over,” he says.

The best way to start a home-grow kit is to first decide the area you have in space to cultivate, which affects your cost. For most people, he recommends a 2-by-4-foot area, which could hold three to four plants and produce a good yield. A reasonable cost starts at around $400 to $500 and can rise exponentially from there.

“Cannabis is not some crazy plant that aliens gave us from some other world, it grows like a pepper, man. It’s a fast-flowering annual,” Haynie explains. “But until you’ve seen it grow, it’s not the same as growing roses or tulips or tomatoes. Growing inside will allow you to learn the plant more and get a better result.” There are options for all kinds of budgets, he says, which are dictated by the space and technique used, with hydroponics being more expensive than traditional gardening.

One of the most important things you need isn’t on this list, but Haynie notes that it’s a basic problem with the current legislation: “They need to provide citizens with a safe way to access genetic material. Currently it’s quite clear they don’t want people buying or selling seeds or cuttings,” he says. “Where do we get the input material? Does it appear from a magic box? That needs to be addressed.”

Enclosure: You need to have an enclosure that stays dark when the plant’s lights are out, such as a tent. “Or else the plants get confused and stressed [with] photoperiod interruptions, they’ll hermaphrodite and pollinate themselves, which is bad, slows down production and it will have seeds all in it.”

Good lights: Plants use photosynthesis, so you’ll need good strong lights with enough intensity to produce quality buds -- but also a light that is safe. If you get suspiciously cheap lights, he says, they won’t be UL [Underwriter Laboratories], ETL [Electrical Testing Labs] or Canadian [Standards Association] certified, which could be a fire hazard. You need about 100 watts of LED for every 2-by-2-foot square at a minimum. Happy Trees can calculate your electricity costs.

Fans: You need to be able to extract heat from an enclosed environment. For example, oscillator fans can simulate natural winds making the plant stems stronger and moving air around to avoid mold and mildew, which cannabis can be prone to inside, he says. 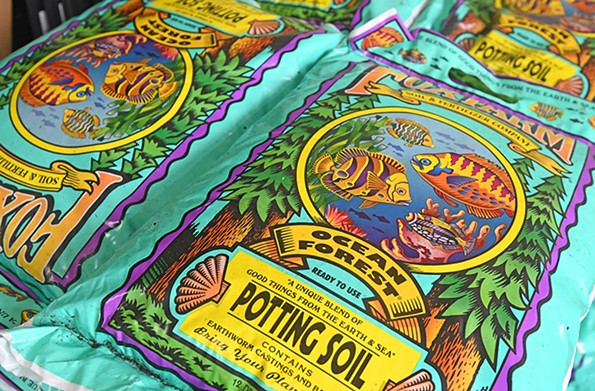 Grow media: You need something to put the plants in, something to hold the roots up so they don’t fall over. The store sells bags of various organic soils. “You want to figure out what type of media your plants will grow in, which will dictate your No. 5 major component,” he says, which is …

Plant food: You need fertilizers and cannabis has specific nutritional requirements that are different than other plans. Don’t use Miracle-Gro all purpose! It will make your plants have a salty, disgusting taste with too many heavy metals to smoke safely, he says. “If you grow it with nutrients designed for cannabis and adjust them to the stage of growth the plant is in, you’ll get good quality flowers and lots of them.”