But smaller, nondepartmental expenditures also paint a revealing picture of city priorities and relationships -- of outsourcing to nonprofits and old contracts.

After a few days missing in action, the full document is back online, searchable and hours of fun. Here are some interesting tidbits and reminders of how the city collects and spends public money:

1. The mayor put all delinquent taxpayers on notice during his speech and the chart below shows why. There’s more than $23 million in delinquent property taxes -- and that’s only what officials expect to collect this year. Is there more outstanding than that?

Of note, this was a key part of Petersburg’s financial struggles that came to a head in the last year: projected tax revenues that weren’t being properly collected. 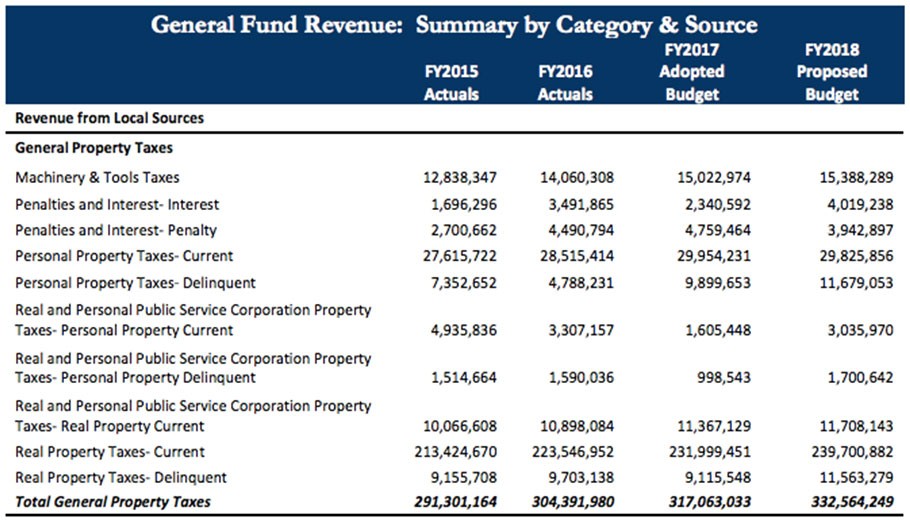 2. The original proposed budget included the city’s contribution to Venture Richmond, the nonprofit downtown development organization, going from $1.09 million this year to $650,000 next year -- a significant cut. But apparently this was an administrative mistake.

Spokesman Jim Nolan says the accurate amount is $990,000, listed in a document of proposed administrative amendments on the city’s budget page -- making for a $100,000 decrease, closer to what Venture received in the previous year.

Lucy Meade, director of marketing and development for Venture, says the organization knew a cut was coming, and that it plans to work with City Council to get the funding restored.

Recent mayoral hopeful Jack Berry was Venture Richmond’s executive director at the beginning of budgeting season last year. He stepped down at the end of March 2016 to begin his campaign. Lisa Sims took over.

3. The city of Richmond turns over its tax on hotel stays each year to the Greater Richmond Convention Center Authority for operations and maintenance. Chesterfield, Henrico, and Hanover counties do too.

Revenue surplus beyond expenditures is returned pro-rated to the localities, according to the Hanover County website.

There’s no readily available accounting of finances for the convention center, which is run by Philadelphia-based Spectra Venue Management, owned by cable giant Comcast. It, presumably, also makes money from leasing the center.

The budget also contains this confusingly worded sentence under a “Budget Highlights” section: “The Mayor’s proposed funding for the FY2018 budget reflects an increase as the result of additionally funding associated with the City of Richmond’s share of the Greater Richmond Convention Center Authority expenses.”

RPAC is a board of local corporate representatives set up to oversee and receive historic tax credits for the renovations of the Altria and Carpenter theaters. They contract with SMG, which books and profits from the shows.

Fun fact: SMG, which also runs the Coliseum and the Redskins Training Camp, and Spectra Venue Management of the convention center, share a corporate history that involves Ed Snider, the founder of the Philadelphia Flyers. SMG at one point stood for Spectacor Management Group, according to the Comcast corporate page. Among all these venues, a lot of Richmond money is finding its way to Philadelphia shareholders.

The city contribution to RPAC was supposed to go down to $250,000 at some point, but, as residents found out a few years ago when the venues got help with a property tax bill, the contracts governing that public-private partnership are difficult to pinpoint. When does that happen?

5. Related, “Center Stage Foundation -- Assistance for Resident Performing Arts Companies” looks to be going away. That was $240,000 last year and $180,000 this year in rental help for the local companies that perform at the RPAC-SMG-run venues, such as the ballet, symphony and opera.

But at least one of those resident companies has its own grant: The Richmond Symphony is getting $50,000, earmarked for two Big Tent community festivals in May and June 2018, according to its director of advancement, Scott Dodson. The Big Tent is the symphony’s outdoor, movable stage.

It’s not a new grant, despite what it looks like in this budget. The city supported Big Tent festivals in 2016 and last year, but this year it moved the grant out of the parks and recreation budget and into its own line item.