Five Business Tips From the Guys at Ledbury 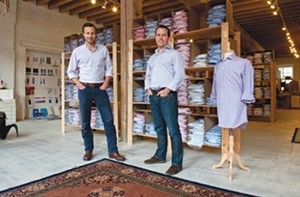 The custom shirt-maker in Shockoe Slip recently opened its first retail space on 14th Street. The company's rapid growth — 150 percent a year since opening in December 2009 and more than 12,000 customers — begs the question: What's the secret? We asked the company's founders, Paul Watson and Paul Trible, what it takes:

1. When starting out, only hire people with your same name to appear massively productive (our first three employees were named Paul).

2. Commit yourself fully. You'll be amazed by motivating power of passion and fear.

3. Be decisive. More often than not, it's indecision (not the wrong decision) that kills a business.

4. Be just as prepared for things going well, as going poorly.

5. Dress for success. You can never have too many shirts (shameless, we know).