A decade after Saxon Shoes rose from the ashes, the family-run retailer is thriving on customer service and trend spotting. 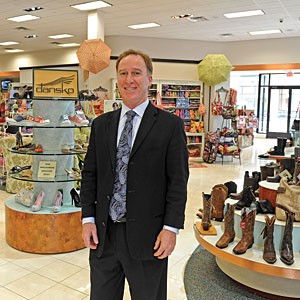 It grew to three stores. It consolidated to one.

It burned. It built again.

And it followed the whims of Richmond shoppers ever westward, from downtown to the near, then far, West End.

For 58 years, Saxon Shoes has not just survived, but flourished. In 2009 the family-run store opened a second location in Fredericksburg. In 2010 it saw nearly double-digit December sales increases, year over year, at its flagship Short Pump store.

How has Saxon succeeded when other old-school, family-run Richmond businesses have withered?

The answer has a lot to do with the peculiarities of the shoe business. Unlike in other retail sectors, independent shoe sellers have an edge over the big chains, says Chuck Schuyler, president of the National Shoe Retailers Association. “They're much quicker in their buying,” Schuyler says. “They see trends and they react to them.”

That means when Richmonders freaked out over Ugg boots, Saxon Shoes kept them in stock when other stores in town had none, says the company's president, Gary Weiner.

Richmonders are persnickety about what they put on their feet (and on their arms). They love the classics, Weiner says: Dansko clogs. Brighton charm bracelets. Vera Bradley bags. But Richmonders also want cutting-edge fashions, shoes they can buy at Saxon but say they got in New York.

Because independent shoe stores tend to carry higher-quality brands, Schuyler says, large chains aren't necessarily offering the same shoes for less. And customer service is the ultimate advantage for independents. While an online behemoth like Zappos.com has become “ridiculously successful” by offering endless selection — Weiner started his own, less successful online shoe store, Shoedini.com, in 1999 — not everyone likes buying shoes online, Schuyler says: “They like to see them, they like to touch them and they certainly like to be fitted.”

Saxon carries women's sizes as small as 4 and large as 14, extra-slim to extra-wide; men's are big as 17. Attentive staff members measure every child who comes in, and a seasoned manager double-checks the fit of every shoe. After getting that kind of service, Weiner says, “it's kind of tough to go someplace else.”

In Richmond, Saxon has 27,000 square feet of retail and stockroom space — nine times the average shoe store, Weiner says. When you walk in the front door, you're hit with that new-leather smell. Your retinas reel from all the Vera Bradley paisley. There aren't just Crocs, mocs, sandals and boots, but also belts, jewelry, cheese knives and cheeky party napkins.

Weiner's parents, Jules “Jack” and Gloria Weiner, opened the first Saxon Shoes in 1953 on Grace Street downtown. They later opened three stores in Richmond, two on Patterson Avenue and one on Main Street downtown. In 1989 Saxon consolidated its operations to one large store in the Ridge Shopping Center on Parham Road.

Ten years ago, on Feb. 17, 2001, the store was destroyed by fire. A lawsuit ensued, alleging a cleaning crew's negligence, but in the end the cause of the fire was undetermined. Saxon continued to pay its 140 employees while the business was closed.

As Saxon rebuilt, Weiner started looking at the surrounding retail ecosystem. “It was a time when I had a lot of time to think,” he says.

Regency Square had lost its cachet, and had made a crucial blunder, in Weiner's opinion, by failing to expand its footprint. Weiner started considering a move to Short Pump. He determined he stood to lose 9 percent of his customers — but gain a 6 percent larger market. In 2005 Saxon Shoes opened in Short Pump Town Center, one of just a handful of local businesses to do so. Shoe shoppers flooded in.

In August 2009, Weiner opened a second store in Fredericksburg. It was a gamble he feared at first he'd lose: Contrary to what leasing agents had told him, the shopping center was just 15 percent occupied when Saxon opened its doors. “So we had a very long 10 months after we opened,” Weiner says. Now, a year and a half later, the store is close to meeting its sales goals, he says.

Weiner loves data. Any hour of any day, he knows exactly how both the Richmond and Fredericksburg stores are performing. A flat-screen TV on the wall in his office displays hourly sales figures and performance rankings of associates. In turn, Weiner shares information about the company's performance with staff.

What's next for Saxon? Weiner says he'll have to see how the Fredericksburg store performs in a lackluster economy before opening store three. There's also the question of whether Saxon will continue as a family-run company after Weiner steps down. His wife, sister, daughter and his oldest son all work for Saxon.

“Today's retail climate is just so much different than in years past,” he says: fewer businesses, bigger stores, less capital. “All that just makes people like us think a little harder.” S