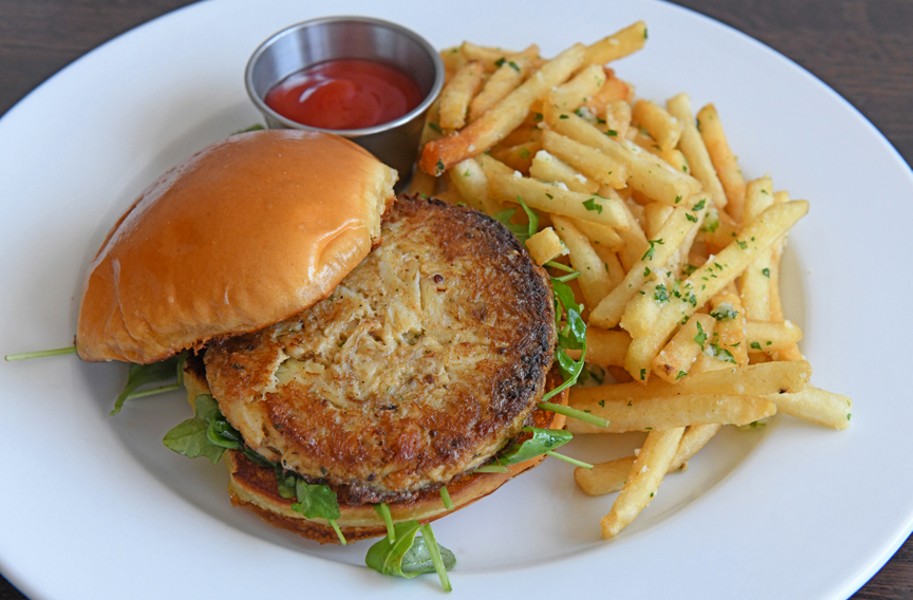 Scott Elmquist The crabcake sandwich at Saltbox Oyster Co. comes on a brioche roll with a side of garlic-Parmesan fries.

Chef Matthew Tlusty clearly knows seafood. Even if you don't remember his little jewel box of a restaurant in Carytown, Limani Fish Grill, Tlusty's deft hand at Saltbox Oyster Co. reveals confidence with ocean ingredients and execution. The food is solid, but the cavernous space and glitchy service don't set a comfortable tone.

The former Volt restaurant in Willow Lawn is an odd space, with an open kitchen flanked by a bar and two dining rooms. New Orleans music and plenty of natural light perk it up, but it felt empty and echoey at lunch with a few guests seated in two rooms rather than being cozied up together.

The cocktail menu is small but varied, emphasizing classics. At dinner I started with a Moulin Rouge 75 ($10), with gin, lemon, lime and sparkling rosé. Served with a fresh strawberry, it was a light spring start to a seafood diner.

Many Richmond restaurants offer local oysters, but Saltbox has a changing list of nearby and distant favorites. The menu lists oysters individually, and also a few raw flights. We opted for the Travelers flight ($21) with eight minerally and briny oysters from British Columbia, Martha's Vineyard, Prince Edward Island and Washington. They came with four house-made garnishes — my favorite was the cilantro chimichurri, with a bright, fresh flavor that didn't overpower our oysters.

When I've had oyster flights in the past, servers have suggested eating them from mildest to strongest. But both times we ordered oysters at Saltbox, the servers either said they didn't know the tasting order, or it didn't matter.

The richness of the seared scallops with polenta, goat cheese and arugula paired well with a glass of the Namorio Albariño ($10) and the Villaviva Côtes de Thau rosé ($8). Albariño is one of my favorite whites with shellfish, and I don't often see it on wine menus. In fact, Saltbox's wine menu is small but interesting, with only a few grocery-store regulars.

The crabcake sandwich ($16) was one of the best I've ever had. Big chunks of jumbo lump crab and claw meat held together with only mayonnaise and egg were served on a brioche roll. Arugula and a citrus vinaigrette added just enough punch. I also couldn't resist the crispy fries with remoulade sauce.

The blackened catfish sandwich ($12) may sound like an '80s throwback, but I loved this disco party in my mouth. The spicy fish was topped with lettuce, a hot pepper relish and crunchy fried shallots. It was a smart balance of hot and cold, savory and spicy, soft and crispy.

I'm not a gumbo or okra fan, but I would eat Saltbox's West African gumbo ($17) any time. Dark and rich with oysters, mussels in the shell and chunks of the fish of the day, the stew is balanced with plenty of black pepper and low-level heat. Ours was improved by adding a pinch more salt at the table.

The rock shrimp pimento mac and cheese ($20) was a creamy, decadent indulgence of ruffled campanelle pasta studded with tender shrimp and bits of asparagus. It was also pretty terrific as a cold snack the next day.

Sadly, we didn't get to share our enthusiasm with our dinner server, because she never checked with us to ask how our dishes were. She also left us with empty cocktail and wine glasses, and at the end of the meal simply plopped down the dessert menu on our box of leftovers, and left.

We envied the table next to us, which had a friendly, attentive server. We eavesdropped on his recommendations, but we were too stuffed to indulge in the bourbon pecan pie ($8) that he so temptingly described.

There were a few other rough spots. At one lunch, sandwiches took 20 minutes to arrive, although the restaurant had only a handful of guests. At our table, when I asked the hostess where the bathrooms were, she waved vaguely and said "around the corner and in the back." Which corner? How far back? It would have been easy enough for her to show me as she walked back to the front door.

If you're looking for casual good cheer, Saltbox's tasty dishes offer solid value for the price, particularly at lunch. But even skilled chefs like Tlusty may find that exemplary kitchen skills are not enough to stay competitive in Richmond's booming restaurant scene. This fish spot needs a bit more schooling on front-of-house details.