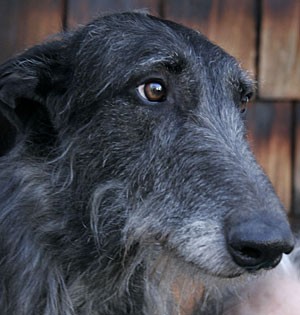 Seven perfect dogs trotted into the Westminster Kennel Club Dog Show's center ring Feb. 15. But my eyes were on only one. Under the lights of New York's Madison Square Garden, the graceful Scottish deerhound Hickory and her handler, Angela Lloyd, took their place among more familiar breeds, such as the cocker spaniel and fox terrier, and followed judge Paolo Dondina's commands.

Glued to the television, I muttered that surely an Italian judge couldn't know the merits of a Scottish deerhound. I told myself it would be good form for the judge to choose the Portuguese water dog, the breed owned by Barack Obama's family. Nervously, I looked away from the screen. And then I heard the judge's shocking words: “The deerhound!”

As an owner of two Scottish deerhounds, a rare breed identifiable to few, I was stunned that Hickory had won — the first deerhound to win Westminster in its 135-year history. Judge Dondina got it right when he said of Hickory: “This animal is like in the heavens. It's not of this world.”

Selfishly, I thought that finally, people who see me walking with my own will know what these large, lean and furry gray dogs are. Just maybe, they'll refrain from guessing that they're Afghan hounds or goats or even ponies. Calling a Scottish deerhound an Irish wolfhound, that I can understand. But a llama? That's like calling a poodle a sheep.

I was among the unenlightened until just a few years ago. Searching for a pal for an old mutt I had at the time, I Googled “laid-back dog breeds” and up popped the Scottish deerhounds. Always partial to scruffy dogs, I was captivated by what I saw and read about their 500-year history and dear demeanor. A little research revealed that deerhounds are scarce — only a handful of litters are born in the United States each year — fond of naps and need lots of exercise.

I lucked into a 4-year-old named Whisky, who'd retired from the show ring and needed a comfy sofa for his twilight years. His original owner retained breeding rights, and two years ago Whisky visited her for stud service with a lovely young deerhound. He has a beautiful daughter (from a different dalliance) named Goldie who can be found most days reclining in Carytown's Mariah Robinson Antiques.

Whisky proved to be such an affectionate, magically good-humored dog, that a year ago I began to search for another. I learned of Spur, a 2-year-old who'd been returned to breeders Scott and Cecilia Dove in Warrenton. And that's how we came to have the half-brother of Hickory, the top dog in the country. Our boy Spur and the incomparable Hickory share the same mother, Summoning Charms, a sweet old girl who can be found lounging about at the Doves' 50-acre farm.

The day after Westminster concluded, while Hickory was enjoying her steak at Sardi's and a trip to the top of the Empire State Building, I was walking Whisky around my neighborhood as usual. His floating gait and 90-pound frame caught the eye of a mailman who yelled across a yard: “Hey! That's one of those dogs!” A guy in a pickup truck slowed and rolled down his window to kid, “Just back from Westminster?” Since then, it's gotten so I can barely make it around the block with Spur or Whisky without a driver stopping to gawk and chat. From what I'm hearing, owners worldwide are experiencing the same curiosity.

The surge in awareness has the deerhound crowd buzzing with both pride and concern. For a dog that had its heyday in the 1850s, things have been fairly quiet in recent years. Many believe that the small number of dogs has helped keep the breed's integrity intact. Judge Dondina's comment about Hickory being very close to the standard of the breed as it was 150 years ago delighted all who show them competitively.

But breeders are worried that people who are newly interested in these dogs won't realize how much space they require, or that there are special health issues many of the large breeds have. They fear that puppy mills may try to get their hands on dogs and mistreat them. Always cautious about screening potential owners, breeders are more protective than ever.

Suddenly, we deerhound owners have become ambassadors for the breed. The answers are becoming rote: Yes, they eat a lot, and yes, they take up a lot of space and stand in front of the television and try to sleep on the bed. But, believe me, these dogs are no goats. Spur, Whisky, Hickory and the rest of the breed are truly, as Sir Walter Scott once called them, “the most perfect creatures of heaven.” S