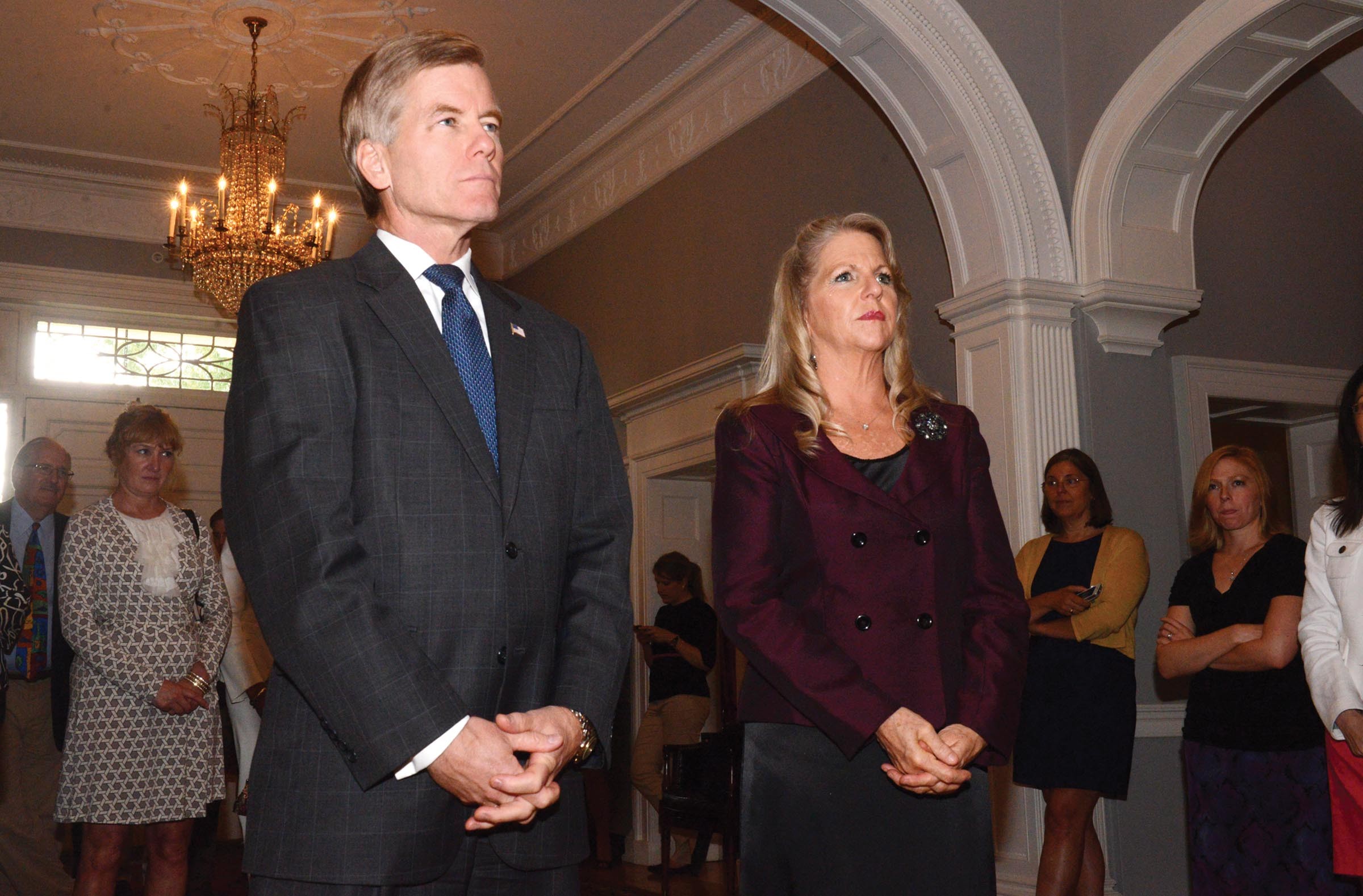 It may have been impolitic to steal a glance at the first wrist, but Rolex and scandal watchers were curious. How would Gov. Bob and Maureen McDonnell's hosting duties play out during a festive reception while cringing at recent headlines?

The noontime celebration last week welcomes 130 wine industry guests with the uncorking of a commemorative vintage to mark the Executive Mansion's 200th year.

Across the street, the Lee Harvey Oswald assassination scene is being filmed for National Geographic Channel's "Killing Kennedy." Fake cops and marshals in cowboy hats sneak an occasional smoke on the broiling sidewalk, while guests in summer finery pour into the mansion.

After an hour the governor and first lady emerge, subdued but appreciative.

Mrs. McDonnell throws back a glass of wine in the manner of a bar shot, acknowledging nervousness at speaking to the group off-script. She falters midway through "I'll always remember this as one of the sweetest memories I've had since coming here," but regains composure to tell the story.

History inspired her to plant 10 chambourcin grapevines behind the mansion — one of the colony's earliest rules required all come heres to the New World to plant 10 vines and let them prosper. The law is "still on the books" she says.

Though the mansion garden is said to contain more beer hops than wine grapes, it's the explosive growth of Virginia's wine industry that earned this celebration. Virginia wine sales have been up 20 percent in four years to nearly half a million cases last year. Wine tourism jumped to 1.6 million visitors last year and wineries reached some 230.

Virginia vintners Luca Paschina of Barboursville, Emily Pelton of Veritas and Matthieu Finot of King Family Vineyards blended the garden's modest yield with the best grapes from a handful of growers, working with Mrs. McDonnell to hit the right taste. Paschina groaned at the production budget of $7 a bottle, well below the cost to make his premium Octagon. And this new wine, dubbed 1813 after the mansion's birth year, would be shipped to influencers worldwide. Their batch filled precisely 1813 bottles, none for sale.

City Councilman Jon Baliles, invited by his mother, former first lady Jeannie Baliles, reminisces about living in the old open-hearth kitchen building during his teenage years — his self-described Depeche Mode haircut still on display in a photo near the bar. Former mansion chef Mark Herndon recalls using a small Weber grill to cook steaks during the George Allen era. Herndon has filled in a few times since the ouster of chef Todd Schneider in a legal action that ignited the current imbroglio.

After urging guests to sample the spread, the first couple poses for pictures, a silvery watch peeking from the governor's cuff. Guests step into the swelter carrying souvenir bottles of the people's "incredibly drinkable" grapes, as Paschina described them, suspending, at least temporarily, any talk of controversy.