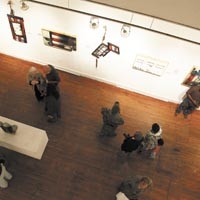 Richmond's Band-Aid fix for overcrowding in First Fridays Artwalk galleries may be a bit small to cover the possible bleeding that the city's renewed enforcement of building and fire codes at the event could cause to attendance.

Of the 30 or so galleries and businesses that participate in the monthly event, officials have held conversations with 27, acting building commissioner Ray Abassi says. Of those, four have applied for increased occupancy permits under a hastily created retail art gallery zoning classification.

With just days to go before the October First Fridays event, Abassi characterized efforts to prepare businesses as a successful exercise in cooperation.

Gallery owners tell a different story. Fearing new city crackdowns on building code violations, many aren't applying for the new permits. Others say the permits offer occupancy increases that are only a slightly more than what's already allowed in their spaces.

Many of the participating businesses participating in the eight-year-old First Fridays — known to draw crowds of 3,000 or more to a half-dozen blocks of East Broad Street — are in buildings more than 50 years old and fail to meet the building code.

“As maddening as this situation is, it's obviously difficult for there to be a compromise between enforcing the law. … and the day-to-day reality of what these businesses' missions are,” says Christina Newton, director of Curated Culture, which organizes the First Fridays event. She says the city's recent, sudden interest in enforcing compliance on them has left many business owners upset.

Under the new occupancy permitting, the four businesses that have so far received the permits typically went from occupancies of 10 people to 15 people to between 30 and 49. At past First Fridays events, some of those galleries have seen occupancy swell to near 100. Many of those spaces are large, open areas — 2,000 square feet or more — but lack the modern structural amenities such as sprinkler systems or additional bathrooms to be granted permits for more people.

Asked if his office would attend the October First Fridays event to ensure compliance, Abassi says: “I'm sure.”

Newton laments what may become a necessary restriction to the free flow of a casual crowd at the event as lines form outside galleries and potential patrons become frustrated and leave. It's “a discouraging thing,” she says, suspecting that in time “the die-hard art lovers will come” but others may not.

“The city has done an admirable effort to create this compromise. … but it still is going to limit the number of occupants,” Newton says, “which will lead to a loss of sales.”