Will Solis Genesis Chapman and his daughter hike a field on Bent Mountain in Roanoke County. Many properties on the mountain are in the route of the proposed Mountain Valley Pipeline.

Settled in the early 1700s by trappers in search of untouched wilderness, the mountain is historically known for Longwood, the first home established by Col. Andrew Lewis. Today the area is home to around 800 people along with federally protected waters, land and game conservancies.

“There can be a very lonesome feeling here,” says Richmond artist Genesis Chapman, who grew up on the mountain and still calls it his favorite place in the world.

“In bluegrass they call it the ‘high lonesome sound,’” Chapman says. “There is definitely a sense that permeates this area of the people who were here before. As a kid growing up I’d find those old abandoned homesteads that have been there for a hundred years, old cabins, arrowheads. Of course, I’ve seen things change in my short lifetime. My work is my own documentation of those changes.”

First Friday regulars might recognize Chapman’s work from Artspace Gallery’s most recent “Radius250” juried exhibition, where his painting of an emblazoned forest was awarded best in show. Or from 1708 Gallery’s live-drawing event “Exquisite Corpse” last year, where he inked a surrealist mural in collaboration with other Richmond artists.

He’s also participating in the Find Art Doors project, the citywide artist collaboration with Virginia Supportive Housing and Art on Wheels, which recycled 40 doors representing those removed from the renovation of an apartment for the formerly homeless, and turned them into works of art placed across the city. Genesis’ door is on display at Jefferson Park until October, when the doors will be auctioned to benefit Virginia Supported Housing and Art on Wheels.

On the walls of Chapman’s studio near Staples Mill Road are finished black-and-white ink paintings, works in progress and inspirational ephemera — posters, books and knickknacks. Travel three hours west on Interstate 64 and south on Interstate 81, and you’ll find an almost identical studio on a mountain, where his rural work space boasts a large topographical map of Bent Mountain and its deep, thick woods, sweeping fields, creeks and streams. 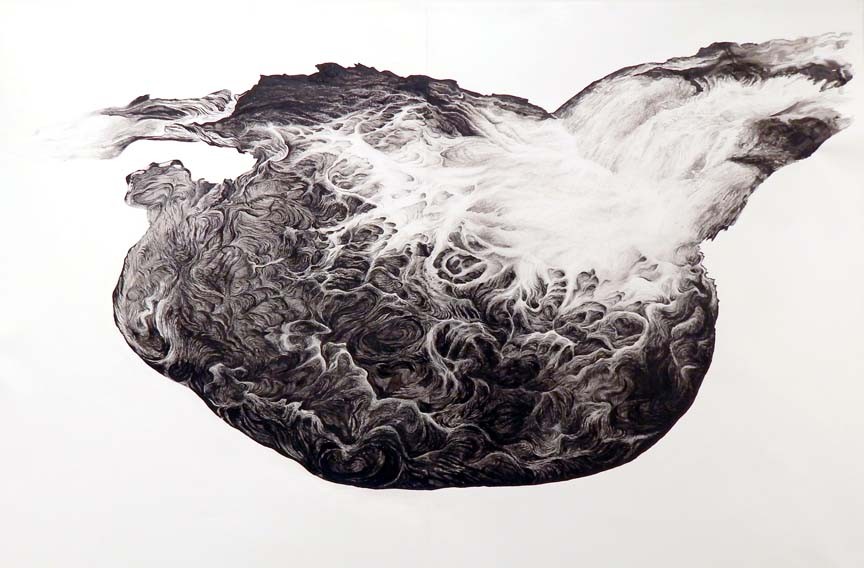 Chapman’s drawings explore the creative and destructive elements he witnesses on the mountain, primarily the power of water and how seemingly insignificant streams have physically carved the mountain over time. To Chapman the challenges come when he focuses on the essential to create what he calls a new landscape while avoiding clichés. The results are abstract views of creeks and streams, while much of the surrounding environment is omitted, falling away into empty white space.

He acknowledges that many changes to the mountain are natural. Recently, heavy storm winds brought down an 80-year-old oak tree by his cabin along with the treehouse he built for his daughter.

But Chapman’s work also considers accelerated, manmade change — and Bent Mountain is no stranger to corporate proposals. The past decade has witnessed such project plans as the expansion of the Interstate 73 corridor, the damming of the Bottom Creek Gorge, subdivisions, industrial power lines, and now, the Mountain Valley Pipeline.

The pipeline is drafted to be a 42-inch buried pipeline that would carry natural gas obtained through hydraulic fracturing for nearly 300 miles through the foothills of Appalachia, beginning in Wetzel County, West Virginia, and connecting with an existing compressor station in Pittsylvania County, Virginia. The proposal has met strong opposition on Bent Mountain since last year, when the pipeline company began contacting landowners.

Roanoke County’s Board of Supervisors has issued a resolution opposing the project to the Federal Energy Regulatory Commission, while the Chamber of Commerce has voiced support, The Roanoke Times reports.

“The way I see it is that [the company] needs to look these people in the eye and tell them that their homes don’t matter and could potentially be destroyed,” Chapman says.

The route of the line is slotted to run within mere feet of several homes on the mountain. “It’s not like I want to put the mountain in a box — I’m not opposed to things changing here,” Chapman adds. “That’s what my work is all about.”

He describes a similar situation regarding the extension of a power line’s right of way through his property that required cutting down acres of forest. “I didn’t fight that because I understood that there was a public need for the power line,” he says. “This pipeline isn’t that kind of situation. It isn’t going to benefit us.”

Several landowners on Bent Mountain denied access to surveyors. But routing, cultural and biological surveying began in early July. Chapman immediately returned to help friends and family patrol the roads and the forests for surveyors attempting to enter posted properties. Interactions between landowners and surveyors have ranged from amiable to heated.

Chapman’s newest art series depicts particular moments of destruction, such as raging fire, which he likens to fear of losing the mountain. He hints at future-themed projects in the works.

“There may be something we can pull off and work to reflect this area but also get the community involved. I’d love to be able to think that there is something I can do as an artist to stop this beyond preserving my own experiences and images,” he says. “Maybe that’s naive or foolish, but you gotta believe in something.” S