Richmond violin-maker Don Leister copies from only the best. 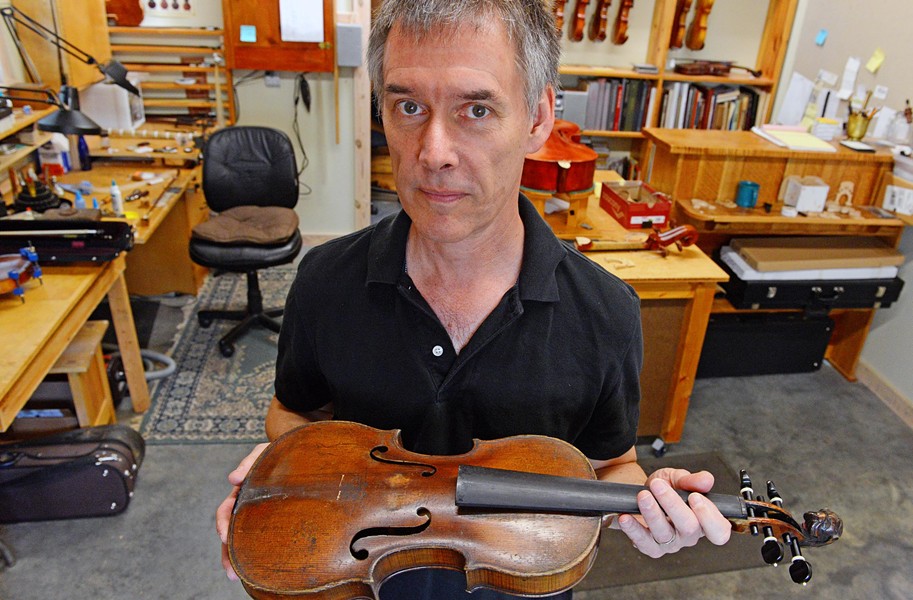 Scott Elmquist VCU graduate and violin-maker Don Leister has worked to hone his craft for the past 27 years.

When Don Leister attends the Richmond Symphony Orchestra, he’s there to not only listen to his music but also admire his handiwork.

“I would say that whenever someone plays my violins in the Richmond Symphony, that’s a thrill for me,” he says.

Although he repairs about 300 bows a year, Leister’s proudest achievements are the 75 violins he’s created by hand during the past 27 years. Each of his instruments requires more than 100 hours of work and is made entirely from scratch in his workshop.

“The violin was and still is an unsolved mystery to me,” he says. “It’s the ultimate woodworking challenge.”

Leister studied printmaking and painting at the Virginia Commonwealth University arts department, where he graduated in 1985. He was a woodworker when he decided to pick up the violin again, he says: “I liked making things and I always wanted a better violin.”

To learn his craft, Leister attended a number of workshops and conferences. At the Violin Makers of Association of Arizona International Convention in 2002, he was awarded the top prize overall for his violin, which encouraged him to continue.

Leister takes his inspiration from the violins of Cremona, Italy, where Bishop Nicolo Sfondrati, who became Pope Gregory XIV in 1590, was a fervent supporter of the arts and grew the town’s musical reputation — specifically the work of violin makers Nicolo Amati, Giuseppe Guarneri and, most famously, Antonio Stradivari.

“He was changing the designs but just so subtly, working within a pretty defined design,” Leister says of Stradivari. “He took what he learned and took it to another level.”

Leister purchases rare, limited production books with measurements and specifications of the Cremonese violins. The two primary woods used in violin-making are maple and spruce. He imports the maple from the Balkans, as Stradivari did, and spruce from Northern Italy. Though he often purchases varnishes from supply shops, he’s also experimented with picking his own resins on trips to New England.

“Don comes from a tradition of crafts-people who have a very strong sense of respect for craft, for figuring things out mechanically, and I think that’s deeply ingrained in his family values,” says his wife, Laura Chessin, an amateur violinist.

The attention to detail helps Leister elevate his product in an increasingly crowded marketplace that’s been diluted by a spate of Chinese-produced violins.

“He’s an asset to Richmond — we’re lucky to have him,” says Richmond Symphony violinist Jocelyn Adelman Vorenberg, who goes to Leister for repairs and plays one of his violins. “He makes great instruments.”

Adelman Vorenberg notes that although Leister is one of the best local craftsmen for violin repair and construction, Richmond Symphony Orchestra violinists generally use someone with whom they have a personal relationship, and that’s often someone they met before moving to Richmond.

Although he does have customers from the symphony ranks, Leister doesn’t actively try to sell to its musicians, although he tries to get his instruments in front of them for feedback.

“The instruments need to work and it takes a trained violinist to evaluate the playing characteristics,” Leister says by email — and whether it says what they want it to say. “As an analogy, if one builds a race car, then one doesn’t give it to an average driver to evaluate.”

In addition to his violin repair, Leister has been contracted at various times with the school systems of Richmond and Chesterfield, Hanover, Stafford and Henrico counties, and regularly donates bows to schools in the Richmond area as well as the Richmond Youth Symphony Orchestra.

This work has extra significance for Leister, he says, because he was a military brat who had more than a dozen different addresses before starting high school. He stopped playing the violin when he moved to a school in Georgia that didn’t have a program.

As for whether making his own violins made him better, he says that nothing can substitute for lessons and practice. Though he’s occasionally earned accolades for playing and even placed second in the fiddling competition of the Virginia State Fair in the mid-’90s, he still occasionally takes lessons. S

You can find information on Don Leister’s work at donleister.com.