A local filmmaker is telling the story of the inventor behind the first successful electric streetcar system, right here in Richmond.

Patrick Gregory has been working in Virginia’s commercial film industry for over two decades, mostly as a cinematographer. The Bon Air native graduated from VCU’s film department and his work on documentaries and music videos has taken him around the world. In 2012, he received a Theresa Pollak Award from Richmond Magazine for his dedication to creating memorable images.

His company, Flexible Cinema, describes as its mission to “explore interesting topics and advocate for change through education awareness and enlightenment.”

Over the past six years, Gregory has been working on his first full-length film as a director and learning about the enormous amount of time, research and support it takes to produce a historical documentary, he says.

The idea started out as a documentary about the rise and fall of the first successful electric streetcar system, right here in Richmond. Since then it has become more about the Connecticut-born inventor behind the system, Frank J. Sprague (1857-1934), also known as the “father of electric traction” for his innovations with the constant-speed traction motor, which is still used today in light rails, the first automatic elevator system and multiple unit systems for railroads.

Gregory says that Sprague, a Naval Academy graduate, was abandoned as a child, which he speculates may have added a psychological drive to be successful and admired for his achievements — which you can learn more about in the film.

Style Weekly: How did you get into this project?

Patrick Gregory: It started out with Harry Kollatz and I working on the life and death of the Richmond streetcar. But the more I got into the Sprague, I found more interest focusing on his genius and how he arrived here. It just seemed like a more interesting story. … The human condition is more interesting to me than a 61-year event.

Why is so little known about him as opposed to someone like Thomas Edison or Nikola Tesla?

Well, he did join Edison’s company but only lasted 11 months. Very much like Tesla, he wanted his own name on things. So he left and formed Sprague Electric Motor Co. out of New York in the 1880s. He often had to sell his patents. … Like today, an underfunded startup back then was overshadowed [by the major companies]. … This is a story of a real underdog, although in the end he didn’t get the recognition he deserved. I’m hoping to shed light on his achievements and change that.

Everyone I’ve talked to has said he’s just been sort of lost in history. The person I feel the most compelled to tell the story for is his grandson, who has been pushing his legacy for the last four years. And he didn’t even know about him until he was almost 50. The family didn’t talk about him.

What’s been the most surprising thing you’ve learned about Richmond? 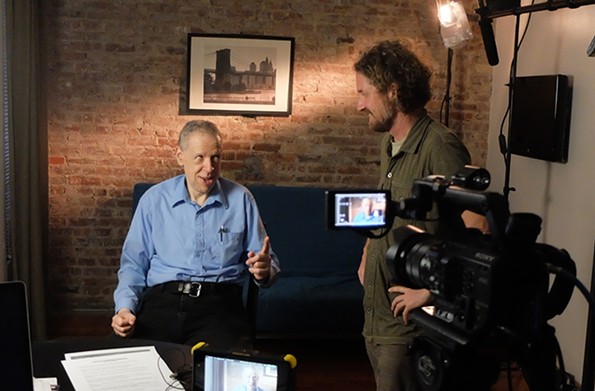 During the 1880s, Richmond was a progressive, forward-thinking town. It was the private sector that funded this project. … J. Thompson Brown was a Richmond [real estate agent] back in that time and was very instrumental in pushing for city expansion. He pulled local people together to fund this project.

When and why did they take down the Richmond streetcar system?

They took it down in 1949. I think it was a combination of a lot of things, bus companies, oil companies, politicians. All these people [who] wanted something different. Ridership declined.

What have the challenges been so far on the film?

Funding mainly. This has been a labor of love. We’ve gotten a small amount of funding from [the Institute of Electrical and Electronics Engineers] and Berkshire Taconic Community Foundation and some small donations. But primarily this has been me paying for it, so I have to do it in between things.

But as far as information, Sprague was meticulous in documenting his life. The New York Public library has over 100 boxes of his writings, photographs and letters. And he has countless articles in old trade magazines. We’re using his writing as the primary first person form of narration.

How far along are you?

We are in postproduction, but I just applied for more PBS funding. We have a dream list of shooting, which would take me to London, Chicago, Boston, other places, if it comes through. If we don’t get that funding, we’re about 90% done. If we do, 70%. … We have applied for ITVS Funding and plan on applying to Virginia Humanities as well as a few others.