A new book finds a Southern author reckoning with the myth of the Lost Cause. 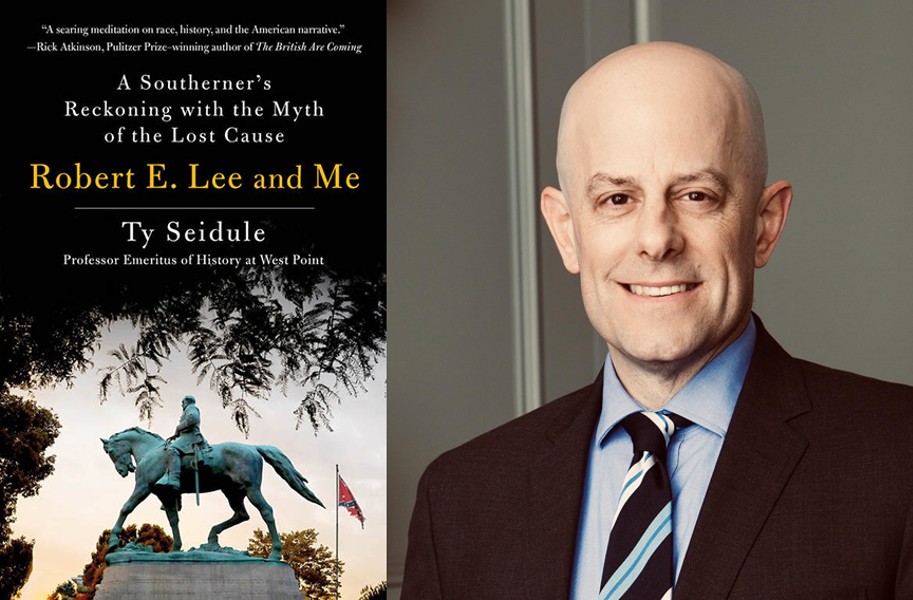 “Robert E. Lee and Me: A Southerner’s Reckoning with the Myth of the Lost Cause” by Ty Seidule

Over the past year, Richmond has been racked by protests over racism and police violence, the Confederate statues and other war memorabilia from the Civil War. As several statues have been removed, one still stands – that of Gen. Robert E. Lee on the city’s grand Monument Avenue.

So who was Lee, exactly? What was the war about? It seems amazing that 155 years after the war ended, such questions are still being asked.

With brilliant timing, a new book is out that has provocative ideas about the mythology created about Lee and the whole point of what it means to be Southern. This goes to the heart of Richmond’s existence and its current troubles.

In “Robert E. Lee and Me,” retired Army general and former paratrooper Ty Seidule says that the whole point of the war was about keeping the horrible practice of slavery in perpetuity. It wasn’t about state’s rights. Black slaves were not happy and protected campers.

This might seem obvious but in his highly personal book Seidule, who was raised in Virginia and Georgia, lays out very well just how the phony mythology evolved.

He writes: “One of the foundations of the Lost Cause myth was the near deification of Robert E. Lee as the perfect example of an educated Christian gentleman. A Marble Man without sin.”

In fact, Seidule writes, Lee was a traitor who took up arms against his country even though he had sworn an oath to protect the United States. Lee wasn’t that great a general, according to the author, and he benefitted greatly from the slaves he controlled. He could have freed them before the war but did not.

It would be hard to challenge Seidule because of his credentials. He has a doctorate from Ohio State and taught history at the U.S. Military Academy and rose to head of that department. When he started his classes, he had a moment of clarity: “Why were there so many memorials to Lee at West Point?

Seidule spent his early years in Alexandria in a home that hung pictures of Lee and other Confederate favorites like Thomas “Stonewall” Jackson. Like Richmond, Alexandria had been a major slave trading market before the Civil War.

His father taught history at Episcopal High School, a prestigious prep school in Alexandria which from 1870 to 1981 had headmasters who were either a Confederate veteran or a veteran’s descendant. Seidule says he totally bought into the ideals at the school and wanted most in life to be a Southern gentleman.

The author was also an undergraduate at Washington and Lee University in Lexington, which, of course, Lee led for several years before dying in 1870. Immediately, Lexington and Richmond battled over where his body would be buried.

It took a few more years for the Lee deification to intensify as federal occupation troops left the South and a wave of white supremacy such as Jim Crow laws and lynching swept the region.

By 1890, the concept of Lee as a savior had become so intense among Richmond’s white leadership that the big statue was put up. Many others followed in the city. Style Weekly writer Ed Slipek has reported that there are nearly 100 statues, memorials or street names pushing so-called Confederate heroes in the city.

The Richmond Times-Dispatch evoked the mythology when it opposed integration in the 1950s and 1960s. Richmond News Leader editor Douglas Southall Freeman won a Pulitzer Prize for his highly favorable, multi-volume biography of Lee.

According to Freeman, Lee’s decision to go over to the Confederacy was one “he was born to make.” Seidule disagrees, noting that when the war broke out, the U.S. Army had eight colonels from Virginia. Lee was the only one to turn his back on his U.S. officer’s oath.

Children’s education was warped to sanctify Lee, according to Seidule. Patronizing and historically inaccurate movies like Walt Disney’s “Song of the South” and Margaret Mitchell’s novel “Gone With the Wind” helped mold children’s minds.

In the 1950s into the 1970s, textbooks approved by Virginia educators claimed that as slaves “Negroes learned to enjoy their work.” Whippings, which were actually very common, were chiefly used for “correcting children.” Lee approved giving some of his slaves the lash. Seidule writes, “As a schoolkid in Virginia, I never received an honest accounting of slavery.”

One issue that especially bothers Seidule is a letter Lee wrote to the Confederate secretary of war with the coming of the Emancipation Proclamation in 1863. Lee said that it was a ”savage and brutal policy … which leaves us no alternative but success or degradation worse than death, if we could save the honor of our families from pollution, our social system from destruction.”

Seidule points out that “pollution” is the rape of white women by Black men – a possibility that terrified white supremacists then as now.