Antennae, a new studio and exhibition space, invites visitors to explore an artist at work. 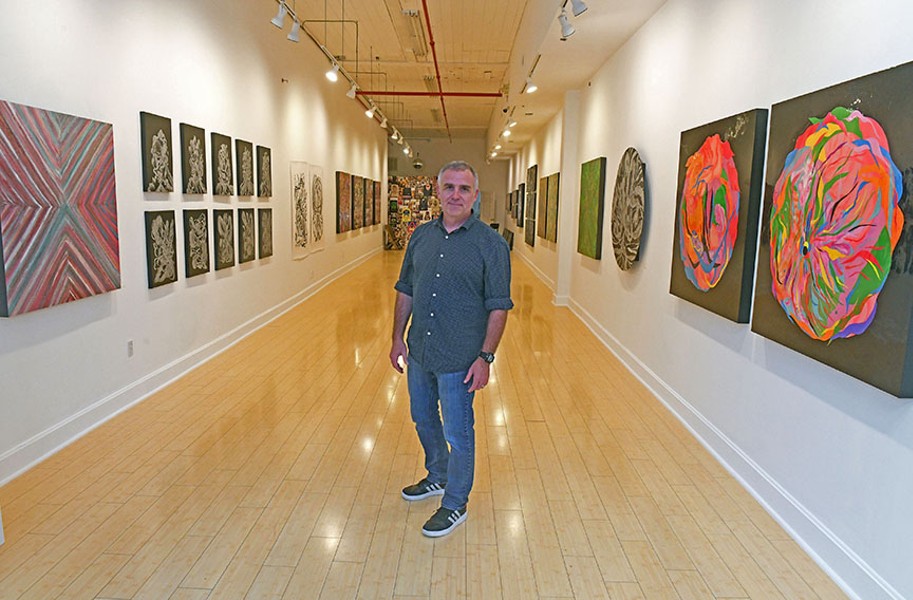 Scott Elmquist Artist Todd Hale will have his street-front gallery, Antennae Studio, open on the First Friday, Jan. 3, from 6 to 11 p.m.

Filled with 16 years of flotsam and jetsam, the front window of the arts district’s newest exhibition space and studio is a visual treasure trove that gathers a mask of Alfred E. Neuman, partially burned prayer candles, a plastic ukulele, a wind-up monkey with cymbals and a souvenir ashtray from Florida shaped liked an alligator.

While the window of Antennae is an ode to artist Todd Hale’s former studio next door, the rest of the building has a more forward focus. The front two-thirds is a dedicated gallery currently exhibiting a retrospective of Hale’s mixed media work over nearly two decades. At the back is a small office, its two exterior walls completely covered in old postcards and posters he designed for past art shows and music events. All the way back is the studio where he spends his time creating art and welcoming anyone interested enough to stop by.

It was a working studio that set Hale on his artistic path. As a suburban middle schooler, he visited the North Side studio of internationally recognized illustrator and sculptor Bill Nelson and was captivated.

“It was like Candy Land to me, with tools and things half-made, like going into a magic workshop,” he recalls. “Seeing a working artist’s space gave me the permission to see that it was a viable way to live.” Tagging along when his mom went to Grace Street to have her hair done, Hale also discovered the classic Richmond head shop, Bohannon’s, where he had another early art experience seeing funky posters, smelling incense and hearing new music.

A Richmond native who graduated Virginia Commonwealth University in 1996 with a degree in painting and printmaking, Hale recalls his professors telling him he’d need to move to New York to make it as an artist. Although he did move away several times, he always returned, determined to succeed at home. In fall 2003, he took possession of an upstairs studio at 6 E. Broad St., working feverishly all month so that he could open his studio one night a month for First Fridays. Often, his art was accompanied by a band playing in the space.

After years of keeping himself to a 30-day grind, Hale was ready to go into reclusive mode and shut down his studio. Instead, he was inspired to imagine a different level of visibility when his landlord mentioned that the street-front gallery next door was available. For right now, he’s only showing his own work, but he hopes to get other artists involved.

“I have a problem with the narcissism of the come-look-at-me mentality, but it’s a necessary evil,” he says. “So working with other artists is a nice break from my own head space.” He’s also planning to bring in bands as he did in his former studio.

It’s because he sees himself as straddling the pre- and post-internet worlds that it was so important to him to launch a brick and mortar gallery.

“I feel lucky to have an analog history. That need is still there because people like to be around other breathing people and see things in real life.”

Despite Richmond’s having plenty of galleries, few invite visitors to a working studio, something Hale would like to see change. Dismantling his old studio to move it next door felt like peeling back the layers of 16 years of artistic endeavor that had encroached on his working space.

“It was therapeutic to get rid of stuff,” he admits, surrounded by work on the new studio’s walls that made the cut. Even a paint-spattered piece of the former studio floor was saved, although he’s not sure yet what its purpose will be beyond a memory, sort of like the eclectic objects clustered in the front window.

At Antennae’s debut First Friday opening in November, he wasn’t the least bit surprised when everyone ended up in his studio.

“It’s like the kitchen at a party,” he laughs. “It’s less intimidating and people are more likely to ask questions than they are in the gallery space. And sometimes those questions help me refine my work.”

And although his new studio has a little less light than his old one, he’s content in his new digs.

“It would make me happy to see someone make that connection that I made when visiting Bill Nelson’s studio,” he says of long-term goals. “For someone to see the permission to do it themselves, that would be my reward.”

Antennae Studio and Exhibition Space is at 8 E. Broad St. It is open Mondays through Fridays from 10 a.m. to 3 p.m., as well as by appointment and on First Fridays. http://instagram.com/flavorhead/