Find Cuts to Pay For Spending

There is a compelling national security and economic case to be made in favor of the alternate F-35 Joint Strike Fighter Engine. 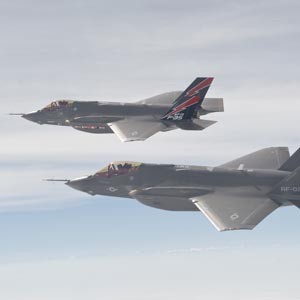 Cantor represents Virginia's 7th District in the House of Representatives, where he serves as the Republican Whip.

For too long, the federal government has spent money that it doesn't have. Guilty parties have included Congresses and administrations run by Republicans and Democrats alike. Everyone knows that Washington has a spending problem, and it has to stop.

The spending spree in Washington has put our country in a very dangerous position. Despite the warning signs, the Obama administration, working in tandem with the Democratic Congress, has made a bad situation worse. Instead of fixing the problem, the federal public debt has soared from $6.3 trillion to $8.2 trillion, and will soar past $20 trillion by 2020. That's trillion, with a "T." Meanwhile, your Congress continues to spend $4.9 billion per day.

Hard-working Virginians want their elected representatives to stop spending and start saving. We are a nation at a crossroads, and the decisions we make today will determine the kind of country we leave our children tomorrow.

To get back on the right path, Congress must start to make some choices that simply can't be delayed any longer. While we won't be able to solve our deficit problems overnight or with one silver bullet, we can and must begin to replace the culture of spending that now dominates Washington with a culture of savings.

I want to be a part of a Congress that is as focused on saving money as it is on spending it. We are working to transform the culture of spending in Washington in several ways, one of which is called YouCut -- a first-of-its-kind initiative designed to defeat runaway spending in Congress. It allows you to vote, both online and on your cellphone, on spending cuts that you want to see the House of Representatives enact. The response has been overwhelming, with more than 875,000 votes cast.

Recently, The Roanoke Times questioned whether my support for an alternative engine for the F-35 Joint Strike Fighter was necessary ("Fiscal responsibility goes out the window," June 13 editorial. Style Weekly also published a piece on this issue, "Jetlagged," June 9, 2010). After much research, I became convinced that there is a compelling national security and economic case to be made in favor of the alternate F-35.

Military procurement competition, particularly in the development of engines, has produced a wide range of savings and improvements in quality over the years -- and I have no doubt that the trend will continue in the future. Simply put, I believe that market competition will not only produce a better product for our military, but actually save money over time.

In fact, the Government Accountability Office reached the same conclusion. It estimated that F-35 engine competition may produce sufficient savings over the fighter's lifetime to offset the cost of developing an alternate engine. The GAO and the Armed Services Committee have also cited benefits such as enhanced operational readiness, superior engine performance, better engine reliability, improved responsiveness from contractors and the maintenance of a healthy industrial base.

Without the funding, we will be straitjacketed with only one engine for a plane that will comprise a whopping 90 percent of our fighters in 2035. This means that if the engine fails in the future, the vast majority of our fleet would be grounded until the problem was fixed or an alternative was found.

The question becomes whether the project is worth a $485 million investment. I believe it is, because ensuring our national defense is a core mission of the federal government. But I also am fully aware that in these challenging times, families in Virginia and across America face tough financial realities every day. To deal with those realities, they are forced to make difficult but necessary decisions. When you buy something you feel is essential, you find ways to save elsewhere so you don't go into debt. Why should your government act any differently?

I strongly believe that any time a member of Congress votes in favor of spending it is incumbent upon him to find ways to save elsewhere. That's why in the last month alone I have forced the House to vote on $100 billion in spending cuts. I wish that the majority of members would have supported the cuts, but each proposal managed to gain a measure of bipartisan support, and I am determined to keep working to find ways to save your money.

Make no mistake, when I support a program that I believe is worthwhile but will cost you money, I will work twice as hard to find areas to save you even more. That is the model we should all follow.