"The Machinist" offers lots of style and a very skinny Christian Bale. 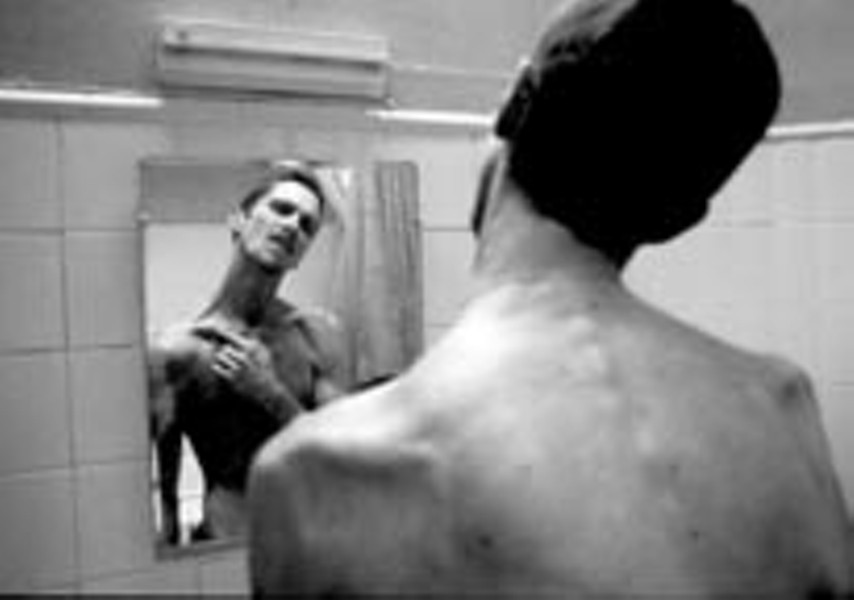 The movie begins with Trevor and Stevie bedded in distinctly unsexy lovemaking, the only bedtime activity he's engaged in for a year. Having much more time on his hands than the average person, he methodically scrubs his bachelor pad with a toothbrush, talks to people others claim do not exist and manages to restrict his movements to locales that are color-saturated and eerily illuminated by cold fluorescent bulbs.

Keeping the candle thus burning makes his work as a lathe operator unnerving to his associates. After all those sleepless nights, a hazy Trevor is not who you want around heavy machinery, and he accidentally — during this kind of movie you might say inevitably — amputates a co-worker's arm. The incident turns the other workers against him and spurs Trevor to dig furiously in his personal pit of suspicion, perhaps even imagining the existence of a mysterious and threatening interloper.

Bale began his screen career with the confidence of childhood as the young male lead in the WWII epic "Empire of the Sun." Since then, he has kept the remnants of his boyish looks even through his most brutal roles, like the one in "American Psycho," which used the Brit's unnaturally rosy cheeks to create the perfect upstanding maniac. It's not surprising that he's set to take over the role of Batman later this year, but "The Machinist" is a transformation. Bale looks like he was created by H.R. Giger to play an existential concentration-camp victim. A surprised look on Trevor's face has the mark of a corpse. The effect is excellent, though one wonders if he risked permanent damage in dropping all that weight.

It soon becomes apparent, however, that star and vehicle are not equals. "The Machinist" suffers from a different kind of weightlessness than its protagonist, one that is not so easy to discern but even more impairing. It is an increasingly familiar construct: highly stylized but without clear purpose, as if eccentric camera angles, lighting and kinetic rush are enough to build up an appeal that can be called edgy. Weird for weird's sake is what you call the convoluted scene in which Trevor dashes in front of a VW bug to convince law enforcement he's been hit by the red sports car often visible in his rearview mirror. The only problem is, the plates match a red Firebird he reported as totaled long ago. Cue minor-key organ chords.

For all its style and clever feints, "The Machinist" soon grinds to a halt. Trevor's flights of fancy, even if a little played at this date, work well as a narrative device. But it's soon evident director Brad Anderson has no other cards to play. The story turns on a single premise, one that plays like a big-budget Discovery Channel investigation of the paranormal. Not sleeping for a year? If nothing else, we expect a claim like that to be an ingenious red herring, yet it's intended as truth. "The Machinist" is too earnest for its own good. Again like "Fight Club," it's hard to talk about the story without giving too much away. Suffice it to say that guilt can be its own form of hell. So can finding out that a two-hour movie has all been a setup for a pedantic zinger.**1/2 S