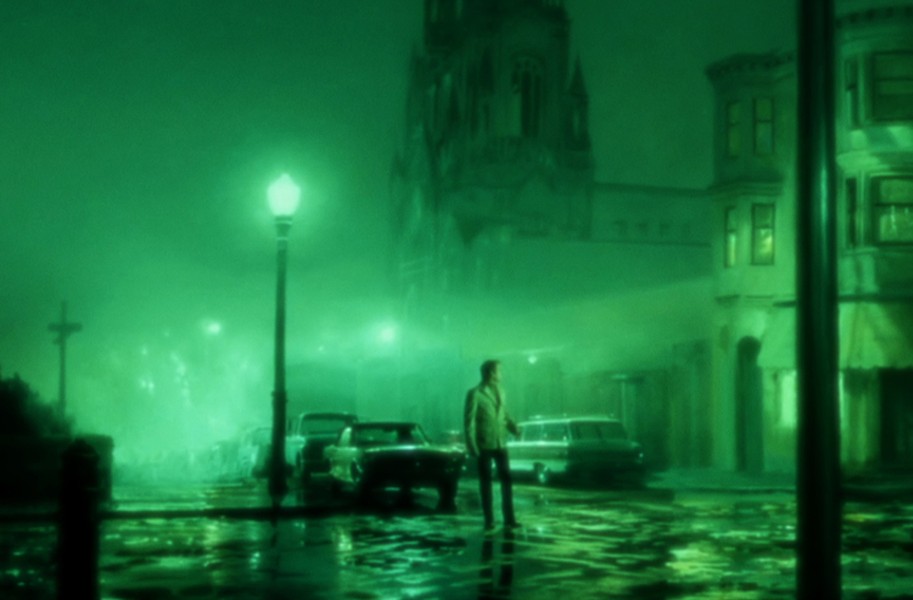 In films such as "Dracula: Pages from a Virgin's Diary" and "The Saddest Music in the World," Canadian filmmaker Guy Maddin essentially builds worlds from pre-existing properties, suggesting how cinema shapes our sense of reality.

Such a notion was later literalized by his haunting documentary "My Winnipeg," and now Maddin goes one step further with "The Green Fog," building a story entirely out of footage from other movies and TV shows.

The narrative of "The Green Fog" is borrowed as well, as the film is a fractured and abstract retelling of Alfred Hitchcock's 1958 masterpiece "Vertigo." In Hitchcock's thriller, a retired detective played by Jimmy Stewart follows a beautiful woman played by Kim Novak, becoming enmeshed in a romantic conspiracy that compels him to re-create his doomed love affair with another woman also played by Novak.

The detective's manipulation of these women often has been read as Hitchcock's tortured exploration of his own manipulation of actresses, whom he couldn't have, and so he created majestic and terrifying fantasy worlds in which he was the undisputed master. So Hitchcock's obsessive sickness can stand for the massive cultural neuroses of male objectification, self-obsession, and sexual violation.

"Vertigo" is set in San Francisco, and Maddin and co-directors and co-editors Evan and Galen Johnson have chosen only media that's set in that architecturally arresting city. One has to know "Vertigo" well to see it in "The Green Fog," as Maddin uses the Hitchcock film as a subtle structural skeleton. The major scenes of "Vertigo" — the detective's tracking of the woman, the woman's apparent fall to her death from a church tower, the detective's subsequent soul sickness, the makeover of the second woman into the first, the second woman's fall from the same church — have been utilized in "The Green Fog" as the basis for montages that become arias of pursuit, voyeurism and sadness. An exhilaratingly vast number of sources fuel "The Green Fog," among them "Dark Passage," "Dirty Harry," and the sublime 1978 version of "Invasion of the Body Snatchers." Perversely, I counted only one image from "Vertigo" itself.

Actor Rock Hudson is prominently featured in "The Green Fog" via Maddin's frequent sampling of the TV show "McMillan and Wife," and Karl Malden and a young Michael Douglas appear quite a bit courtesy of "The Streets of San Francisco." Malden is given one of this film's most haunting scenes, as footage of the "San Francisco" episode "Clown of Death" is used here to approximate the "Vertigo" detective's descent into depression and paranoia. In this context, Malden's wearing of clown makeup suggests the sort of fall from grace that Emil Jannings' character suffered in Josef von Sternberg's "The Blue Angel."

Meanwhile, Hudson is utilized by Maddin and the Johnsons as a kind of overseer. Maddin frequently returns to footage of McMillan surveying monitors, and within those monitors we see footage taken from Maddin's various other sources. If the filmmakers' juxtapositions suggest temporal loops, or perhaps closed circuits — with men endlessly running atop roofs, driving through Bay area streets, and following women — the Hudson footage suggests a loop within a loop, as he's both the detective of "Vertigo" as well as us. We are all united by our addiction to images that are wrenched from an eroticizing of longing, and Hudson seems trapped and enraptured by his preoccupation with pop culture.

Hudson's presence adds another texture, as he's a closeted man whose been made into a "Vertigo" plotline, which itself pivots on the rechanneling of stifled desire. The green fog of this film's title has no presence in "Vertigo" or many of the other sources included here, as it's been invented by Maddin and his collaborators to suggest a physicalizing of subsumed emotion. Near the end of "The Green Fog," Maddin represents the climax of "Vertigo" via a montage of natural disasters, which fuse in the viewer's mind with the fog to suggest a cultural exorcism, particularly of gender tensions.

"The Green Fog" may sound like a work of intellectual conjecture, but it's also viscerally moving. Maddin and the Johnsons reveal the patterns that unite so many totems of pop culture, suggesting that our imaginations are hopelessly governed by a mechanism of catch-and-release that boils down to find the woman, lose the woman, find the bad guy and lose the bad guy.

Maddin prunes most of the dialogue from this footage, creating a stutter effect in which men and women look at one another and make pregnant sounds of incomprehension. Tellingly, we feel as if we aren't missing anything. We've seen so many similar scenes throughout our lives that we can supply the moments with our own subliminal dialogue.

Maddin understands "Vertigo" to be a paradoxically universal poem of isolation — an explosion of the emotions that often insidiously govern art.

"The Green Fog" screens at 8 p.m. on Saturday, March 16, at Virginia Commonwealth University's Grace Street Theater at 8 p.m. as part of an experimental double feature with a tribute to Jonas Mekas. $5. For information on the James River Film Festival, visit jamesriverfilm.org.