This tale plugs human emotion into an overly programmed story. 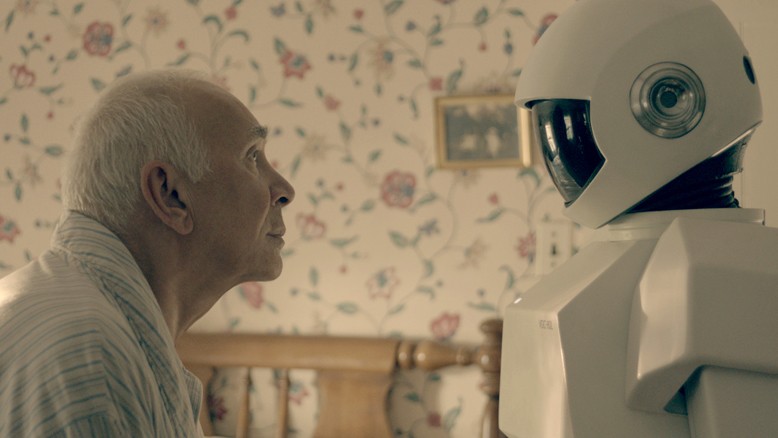 In “Robot & Frank,” Frank Langella gives an almost effortlessly earnest and believable performance of an older man slowly and uneasily slipping into a state of mental confusion. This character, also named Frank, lives alone in a state of slightly disoriented independence. Frank seems to go through distinct periods of clarity and confusion. He isn’t helpless, not yet -- just slightly adrift, and, from what we can see, somewhat depressed. The movie’s setting, in the “near future,” adds to his mental discontinuity. Not only is his memory in trouble, he’s no longer living in his own time. How many of us, the movie seems to ask, will be able to recognize the world in our 80s?

Frank, we surmise, is in the early stages of something worse: Alzheimer’s, perhaps, or at least a condition like it. His adult son, Hunter (James Marsden), shows up early in the film during a regular weekly visit, and must overcome his dad’s resistance to help. Though concerned, Hunter wants to avoid hospitalization, and so, in desperation, has brought a last-ditch effort to help his father stay out of an institution. It’s a robot (voiced by Peter Sarsgaard, doing what sounds like a take on Hal 9000), an advanced model that will not only pick up around the house but also become Frank’s life coach, creating daily routines for him and introducing activities to help rejuvenate his ailing mind.

Frank protests and resists. He sees the robot the way others might view a hearing aid or a walker, but eventually grows to accept, if not appreciate, what the robot can do, which is just about anything. We’re now in the realm of the buddy film, of the “Odd Couple” variety. These two characters and their appealing incongruity are more than enough for this kind of small-scale drama to work with, but “Robot & Frank” doesn’t stop there. Soon we learn that part of the reason Frank caved is because he realizes the robot can help him resume his life as a criminal. Frank, you see, used to be a master cat burglar, scaling high-rise casinos to grab stashes of cash and diamonds. Now he wants to go to work on the local neighborhood.

Why? Reasons are given, but they’re hazy and unconvincing. He wants to steal a rare book from the local library so he can give it to the librarian, Jennifer (Susan Sarandon), because he’s sweet on her, but there’s no indication she wants it. He also wants to burglarize the library’s wealthy and condescending consultant (Jeremy Strong). One reason is retribution, but perhaps resuming his life’s work simply gives Frank his past sense of self back. These activities don’t add much to the film, and in fact get in the way of the more interesting question: What will Frank make of his life going forward?

A quirky but simple tale of an aging misfit and his robot buddy is one thing, but the same film with a heist element feels like one contrivance too many. Frank’s important relationships end up shortchanged by the time wasted on his nightly excursions. His children, including a daughter, Madison (Liv Tyler), are reduced to screenplay devices. Hunter is the bringer of conflict, Madison of complication. The librarian provides a surprise third-act reveal. Other characters show up only to be quickly dispensed with, making “Robot & Frank” seem like the vestige of a larger, drastically cropped set of ideas. With two endings to ponder, we’re left as confused as Frank about what’s really at stake.

The movie hints at many tantalizing implications between this ailing man and his emotional connection to a machine. It’s too bad the film’s makers didn’t trust these compelling ideas to carry their work without piling on empty sci-fi details, romantic-melodrama conceits that don’t go anywhere and action-adventure elements that lack thrills. It would have been a better, more effective movie if, like the title, it had just been about the robot and Frank. Their surprisingly emotional final scene together is a profound indication of what a deeper exploration of their relationship might have looked like, and makes us wish the movie would have just forgotten everything else. (PG-13) 90 min.