Film Review: "Loving" Is More Than Just a History Lesson 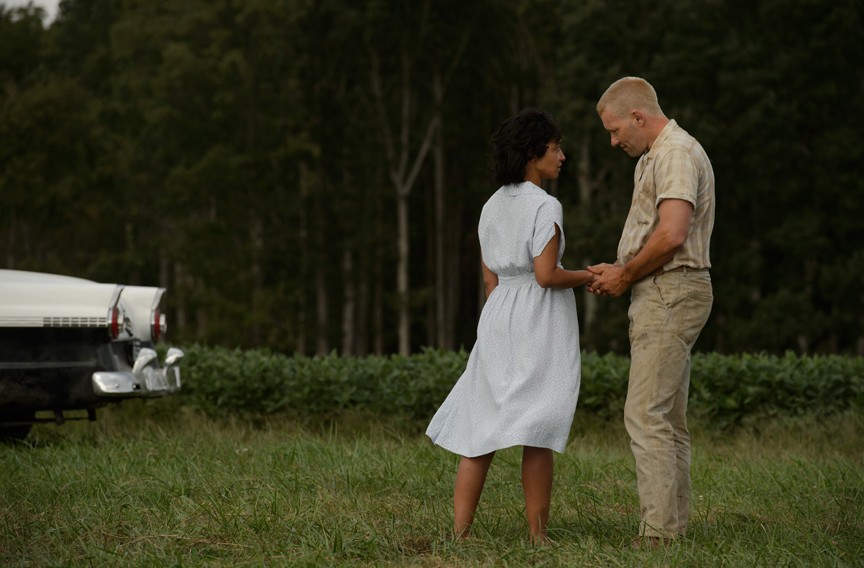 “Loving” has one of those movie plots that seems preposterous, like it could happen only in the movies.

A man and a woman of different ethnic backgrounds in the American South are arrested and threatened with prison time by a judge -- for being married. It would be a laughable example of over-the-top racism, and should be, if, sadly, it weren’t true.

The film dramatizes the ordeal of Richard and Mildred Loving (Joel Edgerton and Ruth Negga), a white man and a black woman in Caroline County arrested in 1959 for marrying in defiance of Virginia’s Racial Integrity Act of 1924. Hauled before a judge, the couple is given an ultimatum: dissolve their marriage and spend a year in jail, or leave the state for a 25-year probation period. The choice is simple: There is no choice.

Simply reminding contemporary audiences that such a thing could and did happen in 20th-century America -- at a time when we had cars and color television, and were about to send men to the moon -- is powerful enough. But “Loving” is much more than a history lesson. Though the Lovings eventually are able to bring their grievance before the Supreme Court in a famous civil-rights case that had sweeping results, the film focuses on their simple daily struggle to be happy.

It’s in that struggle that the film finds its most eloquent statements. The court cases, in Virginia and the nation’s capital, are brief interludes. We spend the majority of the time breathing in the simple lives of Richard and Mildred, who are trying to raise three children under the specter of a society that doesn’t want them to succeed. Richard is a hardworking bricklayer. Mildred is a stay-at-home mother. The two seem an otherwise typical husband and wife in the early 1960s.

The peace of their lives is threatened only by the laws banishing them from their home state. Subtly, “Loving” shows us what a hardship it is to have to move from the wide-open countryside of Caroline County to the comparatively cramped and ugly lower-class row houses of Washington. When the two arrive for the first time, Mildred, heavy with child, takes a long look at a little rectangle of grass that serves as a meager reminder of the acre of land Richard purchased right before they were exiled.

The children must grow up playing in the street, not in the pasture their father intended for them. Car horns and sirens plague the night. A future that promised simple pleasures becomes tedious and dreary. They don’t want to be there, but seem to be stuck.

At this point it’s fair for a viewer to wonder why the city was the only option, as there are similar rural areas of Maryland not too far away. But such questions arise not because the film seems false, but because it rings so true. The gross unfairness to the Lovings, the requirement that they and not the backward authority readjust, makes us yearn to reach back in time and help them.

“Loving” was shot in many parts of Virginia, including Richmond -- local actors Coby Batty, D.L. Hopkins and Scott Wichmann, to name a few, appear in the film -- suggesting sad ironies. It seems a lovely place and time to raise a family, as long as you aren’t like the Lovings. Although eventually they’re able to rent a house in secret not far from their relatives, they live in constant fear of being discovered and sent to prison.

Richard is followed home one day from work, and in another scene finds a clue that someone realized his family’s secret. His imagination terrifies him, and for understandable reasons. The furtive life presented by “Loving” -- constant vigilance about being discovered by the government simply for living -- brings to mind Nazi Germany and the condition of Jews during the waning years of World War II. The sheriff who initially arrests Richard and Mildred wears a uniform that seems period accurate, and also extremely fascist.

“Loving” isn’t likely making these grandiose analogies on purpose. They just exist. The film merely presents the facts, but presents them with such a stark human face we can’t help drawing conclusions of our own. Edgerton and Negga are remarkable as Richard and Mildred, as is Marton Csokas in his role as an imperious rural sheriff. These characters remind us that unthinkable prejudice and discrimination require individuals as well as institutions. Luckily for the Lovings, there were also forces on the other side. (PG-13) 123 min.