Film Review: "Get Out" 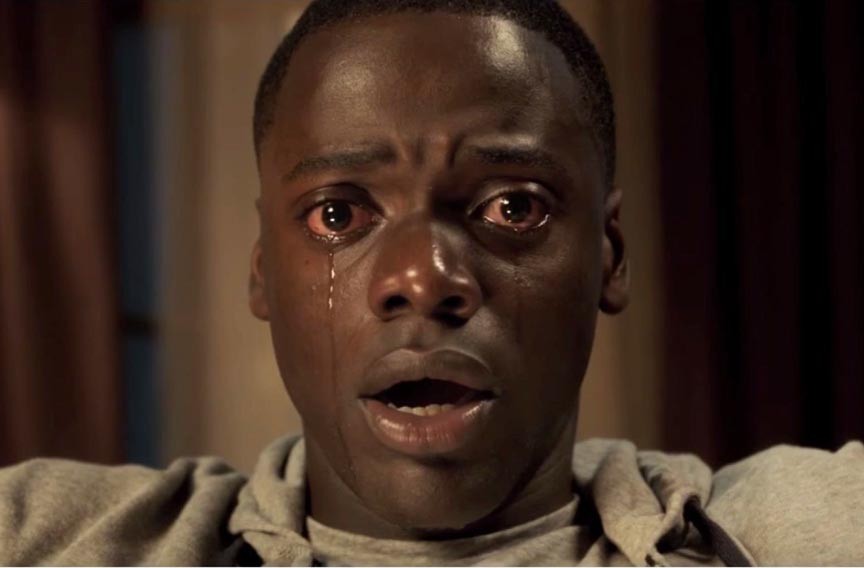 Right from the trailer for “Get Out,” the new horror comedy from Jordan Peele, movie fans will recognize an obvious inspiration. We’re looking at a “Stepford Wives” re-boot with an interesting twist. Instead of an early-’70s satire about robotic housewives slaving away for the white patriarchy, this time the cross hairs are trained on casual racism, in particular that of modern-day liberals.

The results are unsettling, particularly during the first half of the film where the psychological turmoil of the black protagonist takes center stage. On one level, this is a fun popcorn suspense thriller. But the movie loses any claim to greatness in its final act with a predictable, knock-down, drag-out, bloody horror finish where you can see the moves coming a mile away.

The harrowing story starts out in Brooklyn, where we’re introduced to a young, black photographer, Chris, played by Daniel Kaluuya (“Black Mirror”), and his white girlfriend, Rose, played by Allison Williams, best known for the preening privilege she exudes in the HBO comedy “Girls.” The happy couple is planning a trip to Rose’s parents’ fancy home in the country, and Chris is worried about how the whole race thing will play out.

On the way there, a minor accident occurs featuring a fairly typical run-in with police. But Rose defiantly berates the officer for racial profiling after he asks to see Chris’s ID, even though he wasn’t driving. Chris attempts to comply but can give only a knowing smile as Rose, ever the staunch critic of white privilege, continues to argue until the couple is allowed to leave -- but without any of the drama likely to unfold if a black person argued the same way.

When we get to the homestead, Rose’s family attempts to make Chris comfortable by showering him with liberal bona fides and some cringe-worthy “my mans” -- but all this does is make the audience squirm, as it should. The screws tighten after Chris realizes the only other black people Rose’s family seem to know are two employees, an anesthetized, creepy maid and a menacing groundskeeper, who both speak and behave as if they’ve been given white pills ... or partial lobotomies.

Rose’s mother, played by Catherine Keener in an eerily restrained performance, is a cold psychologist who uses voodoo hypnotism with her patients. Her father (Bradley Whitford) a blowhard neurologist who notes to Chris during a house tour that his father once lost to Jesse Owens during Hitler’s famous track-and-field moment. And there’s the generic crazy brother too, who might be the most ill-conceived character in the movie. At one point he plays a ukulele on the porch and you practically expect to hear the “Dueling Banjos” motif.

As Chris becomes increasingly unnerved, the inner turmoil is portrayed brilliantly through Kaluuya’s expressive eyes. He does a great acting job throughout. Thankfully, there’s some comedic relief in the form of a running cellphone commentary from his friend back home, Rod (LiRel Howery), a Transportation Security Administration agent who was dead-set against his friend's spending a weekend in a white home from the beginning -- hence the film’s title.

I won’t give away more because there are some genuinely scary moments. But after a steady diet of cutting satire that lifts this movie above average thriller fare, Peele neatly packs the whole thing up into a predictable, escape-the-psychos finish -- just how Hollywood would want it.

It’s truly a shame because the film has Luis Buñuel-level potential when it sticks to needling social commentary. For example, the scenes involving "the sunken place" while Chris is being hypnotized and floating into space are brilliantly effective. This mostly occurs in the first two-thirds of the movie, before an insidious reveal centered on a scientific premise so ludicrous it could be a cartoon. But hey, it’s a movie so we roll with it.

A script with this much to say about today’s racial issues might've accomplished even more by not taking the beaten path to the finish. Instead the movie is most notable for the job first-time director Peele does building a tone of creeping paranoia -- which feels necessary in the face of modern-day, hidden racism.

At a packed early screening, the audience was mostly black, and I heard a lot of knowing murmurs of agreement throughout, as well as the expected cheers during the bloody climax. If you’re a white audience member, you may squirm some, rightfully. Perhaps you'll even find yourself thinking when you leave the theater: “So this is what it feels like when every single character in a film who looks like me is untrustworthy, frightening or downright evil.”