Only good for the camp value of Elizabeth Taylor choking on a chicken wing. 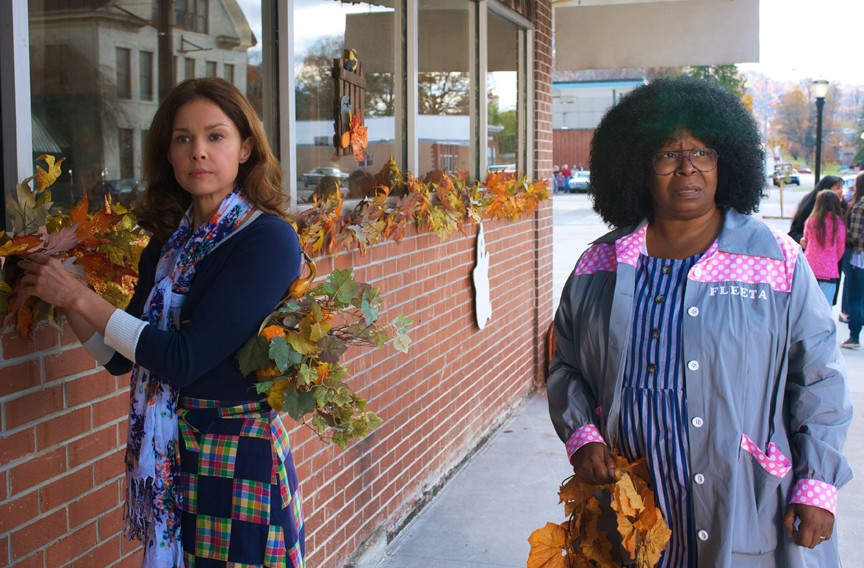 Rarely does all the action of a Virginia writer’s novel-turned-film take place in the author’s hometown (Ellen Glasgow’s Richmond-set work “In This Our Life” directed by John Huston in 1948 and starring Bette Davis is the only one that comes to mind). So Adriana Trigiani’s “Big Stone Gap,” based on her 2000 novel of the same name is worth noting. Not only did the best-selling author and former TV script writer adapt the screenplay, she also directed. So it’s all-Trigiani from opening to closing credits.

“Big Stone Gap” is a creaky valentine to the Wise County town and its hard-working coal miners and their families. The film’s arc follows the year 1978; the shifting seasons are marked by shots of luscious autumn mountain foliage, snow covered roads and the changing holiday decorations at Mutual’s Pharmacy, where Ave Maria (Ashley Judd) runs the family-owned drugstore.

Ave Maria (yes, that’s her name) is a pretty spinster of perhaps 40 who dutifully tends her aging mother and throws herself into directing the town’s annual outdoor drama, “The Trail of the Lonesome Pine.” The play is based on a 1909 best-seller that previously was Big Stone Gap’s claim to fame until native son A. Linwood Holton was elected Virginia’s governor in 1967. A snippet of vintage footage captures him at a Big Stone Gap parade. Assisting Ave Maria in putting on the annual show is her boyfriend, a “Yankee” come-here Theodore (John Benjamin Hickey). He’s a kindred soul in things dramatic if not (surprise) in the sack.

There are other possible suitors however, including small-town lawyer Spec (Anthony LaPaglia) and coal miner stud muffin Jack (an excellent Patrick Wilson) who cleans up well. Trouble is Jack is engaged to blond bimbo Sweet Sue (an overacting Jane Krakowski).

Apparently the local newspaper doesn’t carry Ann Landers’ column since lovelorn advice is offered by such friends as Iva Lou, the tackily, overdressed bookmobile librarian played by Jenna Elfman, and drugstore employee Fleeta, played by Whoopi Goldberg wearing a ridiculously oversized Afro fright wig that might have come from the costume closet of “Superfly” and baggy frocks worthy of Moms Mabley. It says a lot that even in an underwhelming film, the costumes are the worst thing in it. True, it was the ‘70s, but still.

The not-that-interesting ebb and flow of life in small town Virginia is interrupted however by the highly-anticipated campaign stop of U.S. senatorial candidate John Warner and his glamorous wife, Elizabeth Taylor. The locals even organize a Liz Taylor look-alike contest. “John, you said this was going to be an ‘in and out,” snaps the legendary actress (Dagmara Dominczyk hidden by another bad wig). But the campaign stop is extended to a hospital stay when Taylor chokes on a piece of fried chicken. For camp value, this scene alone may be worth the film’s price of admission.

But Liz survives and life goes on in Big Stone Gap. Fortunately, the always sighing Ava Maria has an epiphany following the sequence of her mother’s death, the discovery of a deep family secret, and the realization that Theodore, considering his orientation, might do better in a bigger town: She wants to trace her family roots to Italy.

Miner Jack special-orders her a book on Italy from Richmond (apparently the Athens of America to Southwest Virginians). Before heading off to the Roanoke airport, however, Ave Maria must serve as maid of honor at the worst drunken-wedding scene ever filmed -- both the nuptials and reception. And after a few more significant twists and turns. … Well, I won’t give it away.

In the end, Ave Maria and the good folk of Big Stone Gap (many of whom were cast as extras) are going to be OK. As for the town’s signature cultural achievement, this flick ain’t it.

Better stick to “The Trail of the Lonesome Pine.”