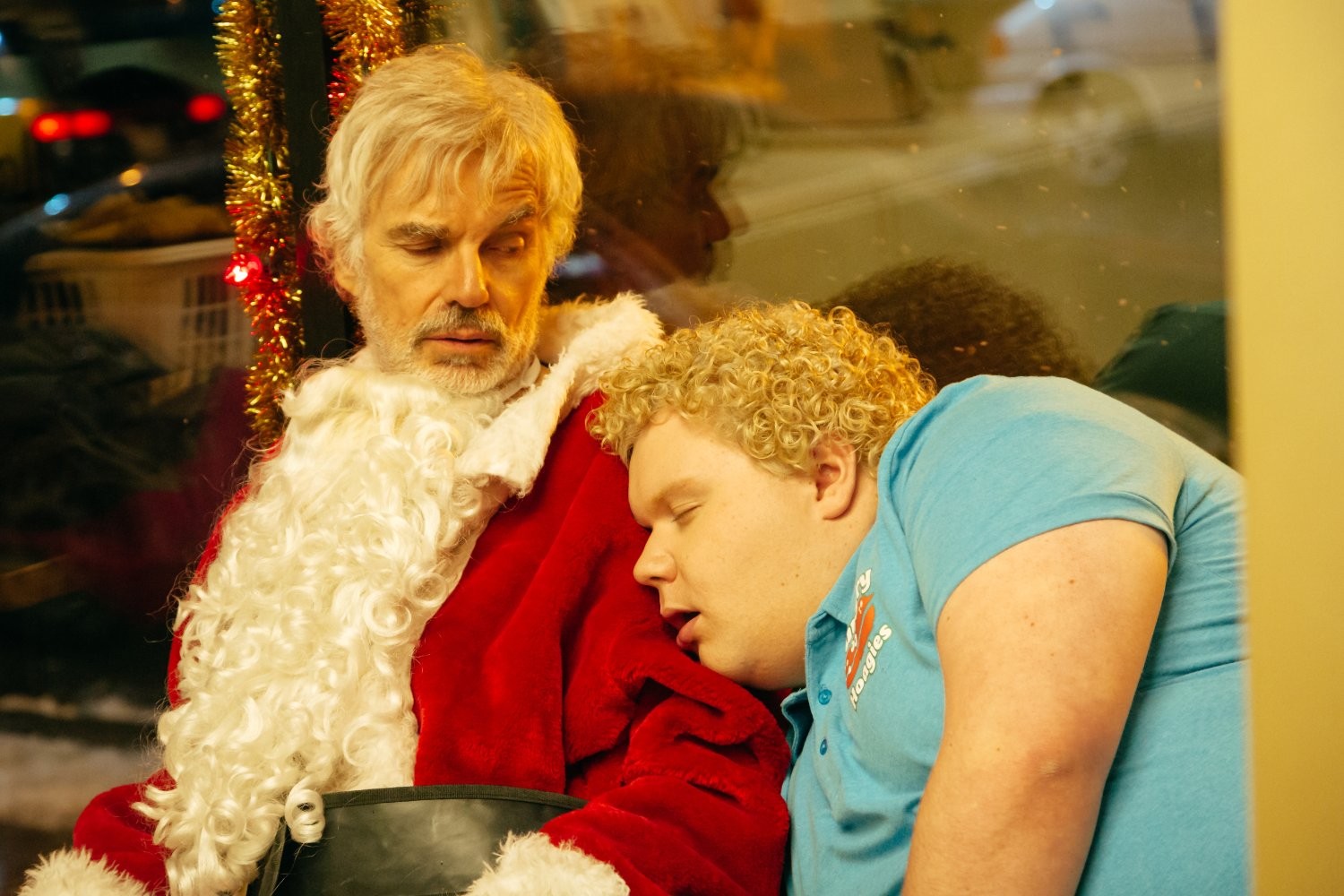 So the big question going into “Bad Santa 2” must be: Is it as badass as the original?

Director Terry Zwigoff’s 2003 dark comedy about an alcoholic, safe-cracking Santa staring into the pit of existential despair, accompanied by a murderous, foul-mouthed elf, was an instant holiday classic. Crass and politically incorrect, the story felt like a kick in the crotch to the commercialization of Christmas and humankind in general, with a sad and beautiful nod to the spirit of giving coming in the form of a bloody wooden pickle carved by a lonely boy.

While the sequel doesn’t achieve cult-level status, it’s safe to say if you liked the original for its raunchiness, you’ll still find belly laughs. Some will be happy just to see these characters interact again, even if the rambling plot feels stitched together from various sketch ideas for gags -- some decent, others not so much.

The bad news for fans: Zwigoff isn’t directing the sequel, sadly, which means the new film directed by Mark Waters (“Mean Girls”) loses a lot of subtlety in the characterization department. Also there were no Coen brothers sharpening the dialogue like the first go ’round, so some lines fall flat.

While it may work a little too hard on the nihilist front -- starting with an early suicide attempt involving an electric oven -- there’s plenty of joy in seeing the reunion of Billy Bob Thornton’s Willie with the now 21-year-old man-child who loves him, Thurman Merman (a shockingly waxlike Brett Kelly). Not to mention little person Marcus (played by Tony Cox), whose main impetus seems to be to get laid after years in prison.

As given away in the trailer, we also get the introduction of Willie’s foul-mouthed mom, Sunny (hint: she’s not), played by Kathy Bates. This is meant to show us how Willie became such a sad sack of vodka vomit, but unfortunately her character is written as more of a cartoonish parody than anything else. Still, lines such as “I didn’t even know I had given birth until I tripped over him” had the Bowtie theater rolling with laughter.

“Bad Santa 2” opens 13 years later with Willie having returned to his alcoholic form, made clear in an opening scene where he’s distracted by a publicly nursing mother and crashes an expensive car while valet parking. Within the first 15 minutes we learn that his old partner in crime, Marcus, has gotten out of a jail and is ready to get back to work robbing a corporate Christmas charity in Chicago.

Spurred by the lure of money and booze, and his own ineptitude at suicide, Willie rejoins the guy who once tried to kill him. Soon he learns that his estranged mother is in on the scheme, too. From the entry of Bates, it’s clear the sequel plans to double down on the raunchy potty talk and gutter sexuality of the original. Yes, this film is all about including more of the three B’s: “booze, bullshit and butt f---ing.”

But “Bad Santa 2” would’ve been better if it included more little moments of humanity that Zwigoff was so good at capturing. The film comes closest within scenes featuring Merman: one involving the image of him being ditched to sleep alone in an overnight laundry. The other happens during his climactic rendition of “Silent Night,” which Thornton’s character doesn’t miss this time, as he would have in the original. It would seem that the unrepentant alcoholic is learning in old age, at last.

The film drives home the point that family is what we make it -- and for those without one, the holidays take on a new kind of meaning.

Unfortunately, this sequel mostly is a case of feckless Hollywood suits deciding that what made the original film so beloved was the raunch. So they amplify that, turning it into a dark Farrelly brothers film punctuated with weak secondary characters missing the original sparks of John Ritter and Bernie Mac (to whom Thornton dedicated his surly performance). The filmmakers should get props for securing Bob Dylan’s cover of “Winter Wonderland,” though.

Reviews across the board have been harsh, considering it a heartless retread lacking in a sufficiently original plot, which is partly true. Others note that its tone-deaf political incorrectness doesn’t work in today’s climate of sincere mob-’splaining and thought-policing online. But if we can’t laugh at and examine character extremes in art, where else can it be done?