FILM: Actors behind cameras and lots of suspense and violence typify an uncommonly full fall lineup

"Mandy" – Director Panos Cosmatos gets the bloody party started with what looks like a potentially mind-blowing revenge story starring Nicolas Cage as an unhinged victim of grotesque gang violence. (That trailer!) Sept. 14.

"Lizzie" – Dramatization of the Lizzie Borden ax murders plays up a speculated sexual connection with Chloë Sevigny as the middle-aged Borden and Kristen Stewart as her live-in maid and lover. Sept. 14.

"Assassination Nation" – What looks like "The Purge" meets "Spring Breakers" was reportedly the biggest earner at Sundance. Sept. 21.

"Colette" – Contractually obliged to make one period costume drama per era, Keira Knightley stars as an infamous French writer who had fame, fortune and freedom briefly withheld by her mentor. Sept. 21.

"Fahrenheit 11/9" – Just a guess, but Michael Moore does not approve of the election of Donald Trump. Sept. 21.

"Hold the Dark" – From the makers of "Blue Ruin" and "Green Room," Alexander Skarsgård, Jeffrey Wright and Riley Keough star in a suspense thriller involving a missing boy and people eaten by wolves. Sept. 28.

"The Old Man and the Gun" – Eighty-one-year-old Robert Redford claims this is his last screen appearance, as an aging bank robber on the run from a detective (Casey Affleck) while romancing at least one woman (Sissy Spacek). Also with Tom Waits. Sept. 28.

"A Star Is Born" – Remaking the 1976 version, star director Bradley Cooper casts himself in Kris Kristofferson's rock-star role, with Lady Gaga as the talented newcomer he discovers. Oct. 5.

"Apostle" – This stylish period thriller casts Dan Stevens ("Legion") as a man bent on rescuing his sister from a Victorian-era cult. Oct. 12.

"First Man" – Director Damien Chazelle ("Whiplash" and "La La Land") moves from musicals to the moon landing with Ryan Gosling as Neil Armstrong, first man to walk on the moon, in a biopic by "Spotlight" screenwriter Josh Singer. Oct. 12.

"Can You Ever Forgive Me?" – An unrecognizable Melissa McCarthy stars in this dramatization of Lee Israel, a popular magazine profiler who turned to forgery and other crimes after her writing career dried up. Oct. 19.

"Wildlife" – Actor Paul Dano ("There Will Be Blood") also gets behind the camera for this family drama about a boy (Ed Oxenbould) growing up in the 1960s as his parents (Jake Gyllynhaal and Carey Mulligan) split. Oct. 19.

"Bohemian Rhapsody" – Biopic about Freddie Mercury (Rami Malek) and the band Queen looks solid if unsurprising, ready to rock you despite many notorious production troubles. Nov. 2.

"Boy Erased" – Joel Edgerton writes, directs and casts himself in this adaptation of a memoir about a college student (Lucas Hedges) sent to gay conversion therapy by his strict Baptist parents (Russell Crowe and Nicole Kidman).

"Suspiria" – Supposedly Quentin Tarantino cried and hugged director Luca Guadagnino ("Call Me by Your Name") at the conclusion of an early industry screening of this remake of Dario Argento's unforgettable art-house horror film. Nov. 2.

"Overlord" – The "Cloverfield" series transports fans back to D-Day in a story that traces the supernatural events in the franchise back to the Third Reich. Nov. 9.

"Peterloo" – Mike Leigh ("Mr. Turner") illustrates a sad day in British history when 15 people were killed and 700 wounded while rallying in St. Peter's Fields for voting reform in 1819. Nov. 9.

"The Girl in the Spider's Web" – Claire Foy ("The Crown") stars in the latest Lisbeth Salander chronicle ("The Girl with the Dragon Tattoo"), the first not to be based on a book by original author Stieg Larsson, who died in 2004. Nov. 9.

"Widows" – Director Steve McQueen ("12 Years a Slave") teams with writer Gillian Flynn ("Gone Girl") for this thriller about four women who decide to pick up where their recently deceased criminal husbands left off. Nov. 16.

"Creed II" – And you thought you'd never see another movie starring Dolph Lundgren. The follow-up to the "Rocky" franchise re-boot pits Adonis Creed (Michael B. Jordan) against the son of the man who killed his father 30 years ago. Nov. 21. 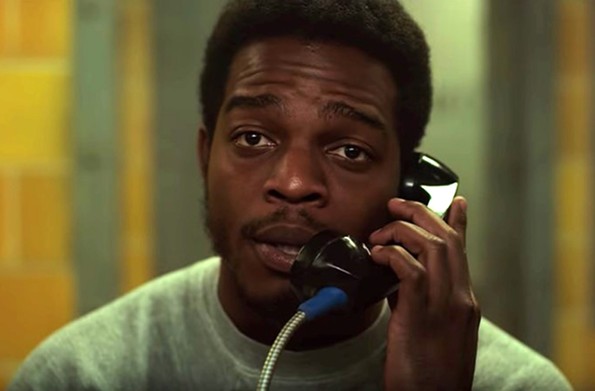 "Mary Queen of Scots" – Saoirse Ronan plays the titular character, who feverishly vies to share power with her southern cousin Queen Elizabeth I (Margot Robbie), or overthrow her. Dec. 7.

Click her to return to the Fall Arts Preview