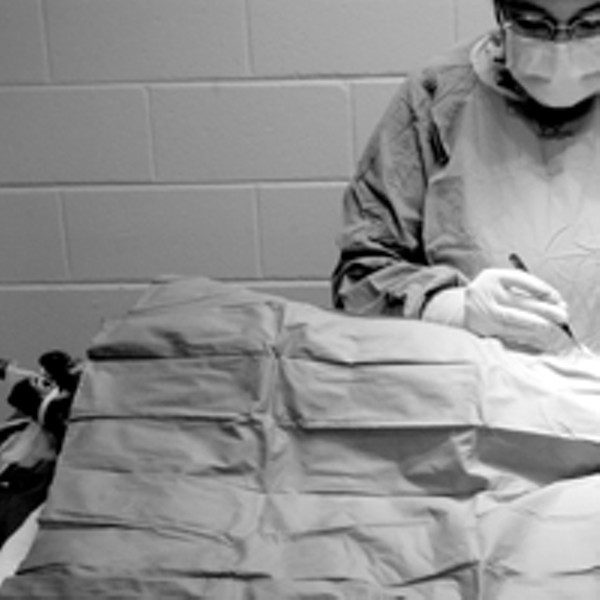 Pictures of diseased dogs and cats are plastered on the wall. The waiting room reeks of animal surgery — a medicinal, wet-dog odor that smacks visitors entering PAL Richmond's cramped spay-and-neuter clinic in Carytown.

The converted row house feels like a mission: a gruff exterior with a fuzzy heart, haunted by sacrificed careers and shrinking paychecks. Kimberly Van Peppen, the clinic's general manager, recalls being grateful to leave the corporate world to work with people who shared her love for animals. She considered herself lucky.

But that was before the personality clashes, angry e-mails and lawyers. Months after ending a rocky partnership with Richmond HERO, a nonprofit started by WRIC-TV 8 to combat animal euthanasia, Van Peppen, a striking woman with long, brown hair wearing floral-print nursing scrubs, has difficulty discussing what happened.

It brings her to tears.

“We worked so hard and accomplished nothing,” Van Peppen says, her voice cracking. “The hours that we put in … and to have it ripped away. It's so hard.”

The animal-welfare community is no stranger to political infighting. But the breakup of Richmond HERO — two of its original partners left the group earlier this year — has some wondering how a partnership created to save animals could turn so sour so quickly. The breakup also raises questions about where the money went and who's making sure nonprofits such as HERO disperse donations as promised.

At the center of the storm is Tom Best, the former general manager of WRIC, the local ABC affiliate, who founded HERO in March 2002. Looking to promote a charitable cause as part of its community outreach, Best and WRIC thought rescuing animals would be just the thing. After some internal discussions, the station decided to focus on sterilizing pets to combat overpopulation, which leads to crowded animal shelters.

It seemed a natural fit. WRIC had a history of promoting animal causes. The TV station's fervent promotion of the Richmond SPCA earned Best an invitation to serve on the SPCA's board in the fall of 2001.

But the relationship abruptly went awry. Robin Starr, the executive director of the Richmond Society for the Prevention of Cruelty to Animals, says Best resigned before attending a single board meeting, and she doesn't know why. “It was a matter of weeks,” she says.

The first hint of a problem came during a SPCA meeting with Best about the organization that would eventually become HERO. He wanted to create a “United Way for animal shelters” that would raise money for local animal-welfare groups, Starr says. During a casual discussion, she advised Best against using the term “rescue” as part of the name. Best didn't like the suggestion, she says, and shortly after he left the SPCA.

“We were shocked. We felt like we were missing something,” says Starr, adding that she made several attempts to contact Best about the new venture — to no avail. “He would not allow us to come meet with him.”

Best tells a different story. During the talks it became clear the SPCA didn't want the station to be part of the “decision-making process” for a group such as HERO, he says. “We did not want to become just a publicity arm for the SPCA.” Though he says he left the door open, the groups weren't able to work out a partnership.

After leaving the SPCA, Best contacted several grassroots organizations that are devoted to sterilizing animals about Richmond HERO. In the spring of 2002, three of them got onboard: PAL (Prevent a Litter) Richmond, Operation Catnip and PetFix Foundation. They met at WRIC's offices at the Arboretum. Best proposed that HERO — an acronym for Humane Education and Rescue Organization — would serve as the fund-raising arm for the three groups, along with 343-PETS, a pet-counseling hotline managed by Best's wife, Betty.

They agreed. “We were really excited about this because it was about spay, neuter,” recalls Susan DeFazio, director of PAL, which completes about 35 surgeries a day for a minimal fee of between $20 and $60 each. “We're not set up like the SPCA.”

It wasn't long, though, before PAL officials grew concerned. Best could be brash, Van Peppen and DeFazio say, and during meetings their input wasn't encouraged. They weren't kept abreast of some changes, they say, and requests for detailed financials — how much money was coming in — went unfulfilled.

PAL and the other members participated in the HERO telethons on Channel 8 (there were three in 2002) and a rummage sale in November of that year. Van Peppen says the group spent “untold hours” on the fund-raising efforts and assumed the money raised would be distributed via direct contributions. That didn't happen, she says.

“We were raising money for all four groups, and someone else was delegating where the money went,” Van Peppen says. As a result, PAL rarely had time to do its own fund raising. “We lost donations,” she adds.

Not so, Best says. PAL and the others understood the money raised by HERO would largely be distributed on a fee-for-service basis — in other words, they would be reimbursed for each operation — and that formal requests would be considered for additional funds for other purposes.

All told, PAL received about $12,000, which includes $1,100 for a machine that monitors blood-oxygen levels. But PAL says the fee-for-service donations didn't really help the group because it was already operating at capacity. They needed money to help pay for equipment and costs related to overhead.

By January of 2003, tensions reached a boiling point. Van Peppen contacted Best and told him that PAL was pulling out of the partnership. According to Van Peppen, Best informed her that HERO would withhold any outstanding funds owed to the group as a deposit against the cost of repainting its recreational vehicle — the HEROmobile displayed PAL's logo — which had been donated by local personal-injury attorney Joel Bieber.

That's when PAL hired a lawyer.

“This was not a conflict that we expected,” Van Peppen says. It was only a precautionary measure to protect its trademark, and PAL says it eventually received the money owed. As for RV — PAL and the other partners were told it would be used to transport animals to and from the clinics — the three clinics haven't actually seen it. (Best says the RV is being used primarily by Save Our Shelters, a shelter that rescues animals from euthanasia.)

Best, however, remains a bit baffled by the group's reaction. Best says the only reason for delaying payments to PAL had to do with its inability to fill out the proper paperwork, which was necessary for accounting purposes. PAL concurs that it wasn't filling out the forms for reimbursement properly.

“They never came to us ever and said, ‘We're not happy with the way things are going,'” Best says. “They were reimbursed for everything they asked for.”

“They are much closer to squirrels or rabbits or nuisance animals in our estimation than they are to pets,” Best says of feral cats. “We didn't feel like it was responsible of us as an organization to devote a significant amount of the money that was raised for neutering pets to something that's an entirely different problem.”

Dr. Shelley Baker, who heads Catnip in Richmond, wouldn't comment. She said the group didn't receive any direct contributions, anyhow. Filings with the IRS show Catnip received $1,034 from HERO in 2002.

Not everyone is unhappy. The Richmond Spay & Neuter Foundation, the only remaining sterilization clinic affiliated with HERO, couldn't be happier. Richmond HERO has been a godsend, says Kay Gross, whose clinic received more than $22,000 from the group in 2002, and more than $25,000 so far this year.

“It's been a wonderful relationship,” Gross says. “We've been able to sterilize over 1,100 animals. I don't know about the communication with other groups, but we've been very grateful for our relationship with Richmond HERO.”

In addition to departing partners, HERO faces other obstacles.

Months before Best, 51, resigned as general manager of Channel 8, the station's parent company, New York-based Young Broadcasting, disconnected the charity from the television station. The board was restructured — four of the six HERO board members who were Channel 8 employees were removed — and Best now serves as the group's treasurer.

Young discontinued the telethons and free airplay that helped the group raise $78,000 in 2002. The charity had enjoyed invaluable access to celebrities such as Jerry Springer and Alex Trebek, who endorsed HERO in commercial spots and appear on the group's Web site. But the arrangement bothered executives in New York.

“We're a television group and Richmond HERO is a charity,” says Jim Morgan, chief financial officer of Young Broadcasting. “We really shouldn't be in the charity business. We're in the profit business.”

Bob Peterson, the station manager who replaced Best, says such arrangements create conflicts of interest. “It fractures the personnel of the station into wearing two hats in the same building,” he says. “I just don't think it's appropriate.”

Richmond HERO, however, isn't the station's first foray into the nonprofit world. HERO arose out of 8 Rising Stars, a nonprofit established by WRIC in 1995 to raise money for public schools through music-education programs. It was founded with more than $40,000 from WRIC, but it didn't resonate well with the public, Best says.

So in 2002, Best says the board decided to change the mission of 8 Rising Stars to that of Richmond HERO. The move allowed the station to establish a new nonprofit without the hassle of establishing an entirely new entity, a cumbersome process that requires a lot of regulatory paperwork.

A charity can change its purpose, according to the IRS, as long as the money raised goes to another charitable cause.

The state, however, has tighter restrictions. J. Michael Wright, manager of regulatory programs in the Office of Consumer Affairs, an arm of the state Department of Agriculture, says state law mandates that money raised for a specific purpose be spent on that purpose.

In HERO's case, about $45,000 remained in its coffers when the charity changed its name and purpose in March 2002.

“The money had sat there for like three or four years without going anywhere,” Best says. “And the TV station had never charged any expenses from the entire 8 Rising Stars project against the contributions, which it had every right to do.”

Robert Brooke, a local attorney who represents HERO and also sits on the board, says that money represents startup contributions given to 8 Rising Stars by its original sponsors, primarily Channel 8, and therefore could legally be redirected to HERO.

“I can't tell you penny for penny, but it was pretty much a match,” says Brooke, an attorney with Troutman Sanders. “The money that was in the bank account when the purpose of the organization was changed was money that had been initially contributed by [the original] sponsors. The money that was raised — it was told it would be used for 8 Rising Stars — it was used for that.”

After an initial examination of HERO's tax filings, Wright says he isn't sure if the transfer complies with state law. “I'm not sure how funds contributed seven years ago remain with the organization,” he says. “This is a pretty big divergence from what the group was originally established for.”

Wright says the Office of Consumer Affairs is making a formal inquiry into the matter. “We are simply requesting information from the organization regarding the change of purpose and any funds remaining,” Wright says.

With WRIC no longer affiliated with HERO, questions remain about the group's purpose and effectiveness without access to the resources of network television. Best says Gross' clinic will most likely be the biggest recipient of the remaining funds raised specifically for sterilizing pets, he adds. HERO also plans to work more closely with animal shelters to help rescue dogs and cats from euthanasia.

The board will meet later this year to decide HERO's next step.