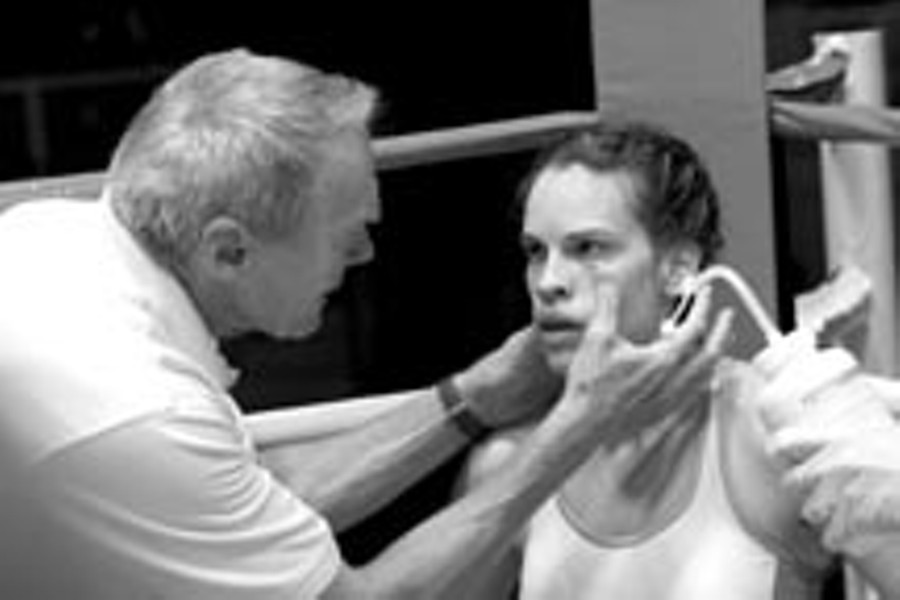 Eastwood is one of the most morbid film directors in the movies these days, and it's not long before we can count among the casualties an estranged daughter, lost faith, at least two broken homes, an uncaring mother, a missing eyeball and the compassionate killing of a canine. And that's just for starters. To Eastwood's credit, we need more movies that take on hard-bitten subjects. But that doesn't mean we need to see them all in one film.

Swank's Maggie Fitzgerald is predictably a hardworking girl from the wrong side of the trailer park who wants desperately to be trained by the codgerly ringside vet, Frankie (Eastwood). Morgan Freeman plays his codgerly friend and also serves as narrator, unavoidably bringing to mind "The Shawshank Redemption." This is not the only instance in casting that seems not thoroughly thought-out. Eastwood and Freeman both speak with overly affected voices, as if they gargle rocks every morning. Putting them in the same room creates an unintentional comic effect, like they're competing to do the best imitation of Burgess Meredith in "Rocky."

"You gotta get mean, Rock."

Maggie Fitzgerald spends every second outside her miserable diner job pounding the bags at Frankie's gym, much to his consternation. All she dreams of is becoming a champion prizefighter, and she's convinced Frankie can train her to become one. But he doesn't train girls, he growls at her more than once, and we smirk with Freeman's character at these gratuitous protests of disinterest. Even a smattering of film history tells us Frankie will help Maggie realize her dreams, and he does. What else could the movie do?

The most well-known movie critic in America, Roger Ebert, recently said on television that you can't possibly know where this movie is going, even if you think you do, provoking the compulsion to check his pulse. You may not know exactly where this movie is going, but it's easy to guess the two ways it could go. "Million Dollar Baby" contains a very conventional story arc that screenwriter Paul Haggis colors as unconventionally as possible with various side plots — including an extremely moving scene with Maggie's trashy mother and sister, and the minutiae of the fight — but this is where "Million Dollar Baby" misses an opportunity to truly test the boundaries of the genre.

It begins well, with gritty details describing the work of "cut men" like Frankie, what happens when a gash is particularly deep, and the mixture of psychology and skill a fighter needs to stand in the ring. Eastwood should have continued to delve into the myriad technical and physical aspects of the sport, to move away from the winning and losing in exchange for a sense of what it actually means to fight for money. But soon it's back to the old routine of training and fights intercut by sage advice. The rash youngster pushes for more and the cautious old-timer holds back. We know where this is going.

Lacking a truly inspirational script, Eastwood does what he can with his camera, and he does plenty. Though he goes to the well too often with Maggie's repugnant family, his scenes with them and what it really means to be part of the lower class in America are the most lacerating since "Monster." The look from outside the ring is similarly tough. The action is bloody and brutal. Swank is ugly, all ears and lips supported by pale muscles. She's thoroughly believable as white trash. Eastwood, now almost 75, sometimes has the appearance of a cadaver, though this may not be acting. He always sounds like the same character from "Unforgiven," but manages to add a few memorable grace notes to his routine.

"Million Dollar Baby" puts up a more realistic fight than many boxing movies, but compared to the greats, it's not a contender. *** S