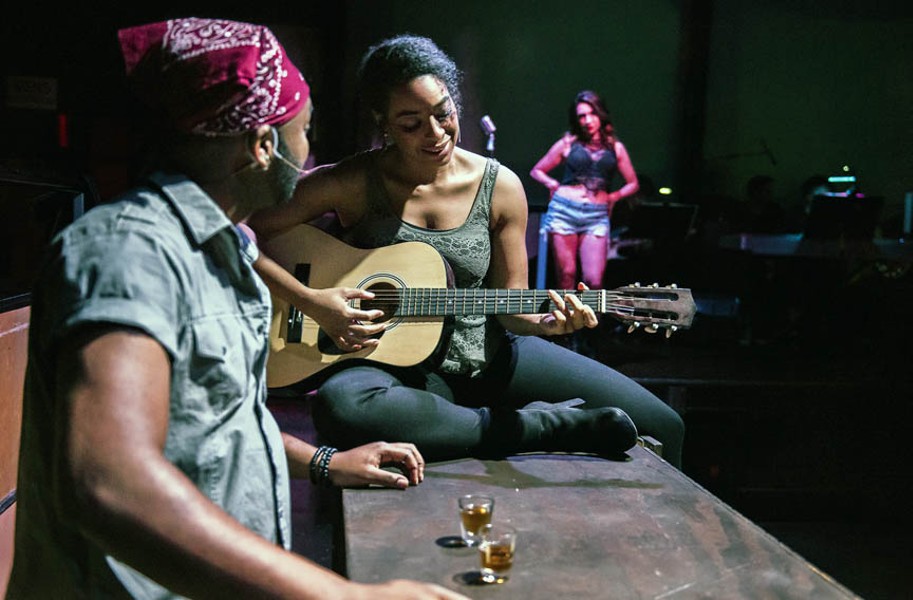 Set in present-day New York, "Murder Ballad" tells the story of the risky love triangle that develops when Sara, a stay-at-home mother with a sweet boyfriend and a quiet life, reconnects with Tom, her raucous bartender ex. As the title promises, the choices Sara makes over the course of this rock musical will lead to spilled blood and more than a few broken hearts. Don't expect a lot of gore, though. "Murder Ballad" is more concerned with the events that precipitate the killing than the violence itself.

"Murder Ballad" first opened off-Broadway in November 2012 at the Manhattan Theatre Club, later moving to Union Square Theatre where the show ran until July 2013. At those two venues, the production took place in a theater made to look as much like a bar as possible. Fifth Wall Theatre's production, staged in and around the tables, chairs and barstools at Club Infuzion in Scott's Addition, turns a bar into a theatrical space instead of the other way around. The result is dynamic and exciting.

Lucian Restivo's direction and his smart use of this unconventional space really sell this production. Audiences can show up early to the venue, order drinks and food, and it should feel like just a normal night out when suddenly the lights dim and the singing begins, and all around you, the show begins to unfold. It's immersive and engaging and quite a lot of fun.

The space presents a number of challenges, and Restivo's direction as well as the technical elements of this production rise to these challenges for the most part. Michael Jarrett's lighting design is spot-on, highlighting important moments and directing attention to the action as actors utilize the entire space, constantly moving. Kim Fox's musical direction is excellent, but Joey Luck's sound design sometimes falls short. It's a frenetic production, so voices can get lost as actors move, turning their backs to one side of the space and projecting in a different direction, and sometimes the mics fail to carry an actor's vocals over the sound of the backing rock band that so easily fills the room.

Though difficult to hear at times, the acting and singing in this production are great all around. Katrinah Carol Lewis plays a sympathetic Sara, sharing tender moments and touching harmonies with a soft-spoken Michael, played by Chris Hester. Durron Tyre's Tom is full of sexual energy, and Rachel Rose Gilmour smolders as the Narrator.

The actors all deliver, but there's only so much they can do to add depth and dimension to what are, essentially, a quartet of stock characters. Because the play focuses less on the interior struggles of these characters in the midst of their heartache than the roles they each assume as the love triangle develops, they never feel fully realized. We watch their relationships develop and deteriorate swiftly, with years sometimes passing between songs, so we don't get to know the characters well enough for the affair or its fallout to feel as significant as it should.

But stock characters in a sexy potboiler delivered in catchy pop-rock duets remains a thoroughly entertaining show, and 5th Wall's production is even better than the off-Broadway production, which I saw just before it closed in 2013. The success of this production is due in large part to the creative use of an unconventional space, but also the sheer talent of everyone involved. It's not the most remarkable or memorable musical, but this production takes risks that pay off. It's dynamic, unique and fun. S