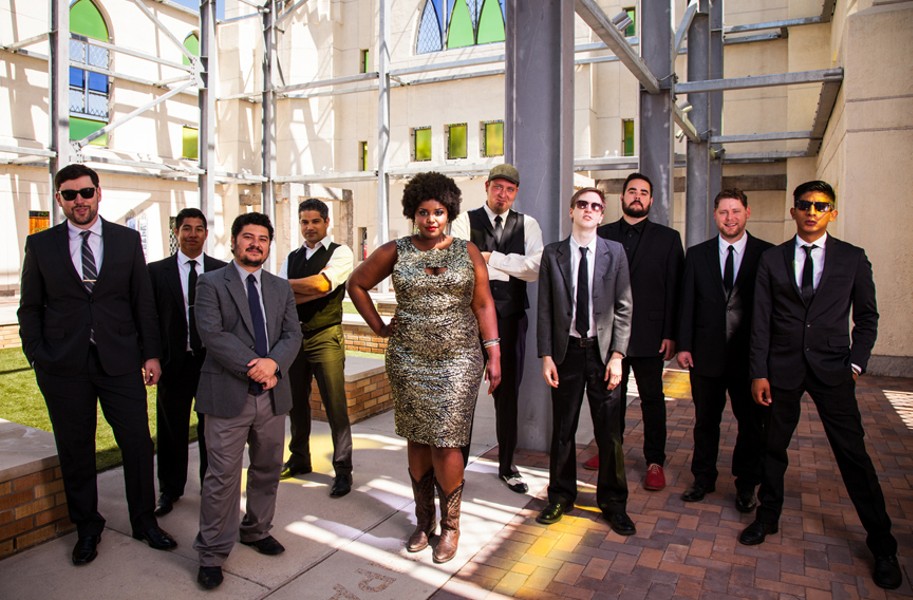 Last time the Suffers played Richmond a few months ago opening for Lake Street Dive, they had the sold-out National crowd ecstatic by the time soulful lead singer Kam Franklin appeared during the headliner’s set.

They never planned on being much more than a local reggae band when they formed in 2011, but the Suffers have evolved into such a genre-busting juggernaut that’re taking up residency on nearly every artists-you-must-know list this year, including Billboard’s and Buzzfeed’s.

They’ve been compared to acts from Sly and the Family Stone to Sharon Jones, but just when you think you’ve figured out their sound, they sucker punch you with something out of left field. They’re fierce, y’all. Really — there are four black belts in the band.

Caribbean percussion, Cajun rhythms and hip-hop rhymes aren’t uncommon in their songs. Powerful singer Kam Franklin describes their self-proclaimed Gulf Coast soul as “a soulful gumbo made of the sounds that inspired us before we all met.”

The Suffers released their self-titled debut in February, but the buzz long preceded the band with fans such as David Letterman and NPR’s Bob Boilen gushing after live performances. Style caught up with the bubbly frontwoman as she packed to hit the road — with spots as far away as Tokyo and right here in Richmond — to talk about everything that’s gone down in the past year.

“The most memorable moment for me so far was that Letterman performance,” says Franklin. She’s referring to the band’s explosive performance of “Gwan,” a track that would later show up on a stellar self-titled debut the following year. And so began the wild ride. “We’d never done anything of that caliber, it was a supreme experience that led to a lot of other things,” she says. “Popped that national TV cherry!” she adds with a laugh.

The band’s name comes from the 1978 Jamaican film, “Rockers,” that finds artists enduring the slings and arrows of trying to make it in the business. While the group still travels in a 15-passenger van with a trailer and admits that music business shenanigans are everything people tell you they are, it’s savoring incremental successes as it revels in making music full-time. This was something members planned roughly a year and a half ago.

“There’s always more than one way to do something. It’ll be fine, especially if you feel more than certain about something,” she says. “Just go with it and take lessons as they come.”

“We are not living a bad life. It sounds cheesy, but really, [not] ever. Even on our worst day, it’s the best day. Those happy, goofy looks on our faces when we play are real, even if people do call us goobers.”

The Suffers play Friday Cheers with Too Many Zooz on June 17. Doors open at 6,and the show’s at 6:30. Tickets cost $5 and children younger than 12 attend for free. venturerichmond.com.