Fiery Furnaces at the National 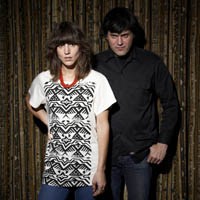 Listening to the Fiery Furnaces, which revolves around brother-and-sister duo Matthew and Eleanor Friedberger, is like watching a Wes Anderson film. Quirky, beautiful, and at times charmingly difficult, the band's sensibilities on what a pop song can sound like teeters between experimental and accessible. With the release of their latest album, “I'm Going Away,” earlier this year, the Friedberger siblings already are working on their next whimsical detour. It's a self-described “silent album” that will consist of instructions, musical notation and graphics (essentially sheet music). Upon that project's release, the band is set to organize a series of “fan-band” concerts in which ordinary Furnaces fans will perform, interpret and add to the distributed compositions. Co-headlining with the White Rabbits, the Fiery Furnaces play the National Sunday, Aug. 16, at 7 p.m. $15-$18. 612-1900. — Mike Hilleary