City Stadium and North Boulevard are top choices, but timing and cost will determine the Redskins’ summer home. 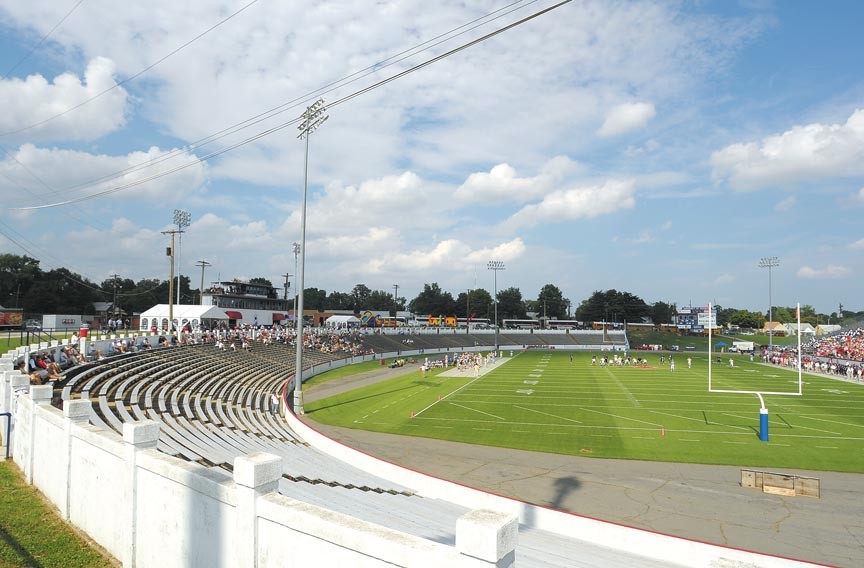 So where will the Redskins practice in Richmond?

So far, not much has been made public, and nothing but a verbal agreement has occurred. Bu the city has promised $400,000 for improvements at a yet-to-determined location, and Mayor Dwight Jones has appointed an 18-member steering committee to help with financing, partnerships and picking a location for Skins' training camp.

The mayor says at least 10 sites are being discussed, but the list hasn't been made public. Speculative locations include City Stadium and Sports Backers Stadium, near The Diamond, along with Virginia Union University and the University of Richmond.

Traditionally, training camps have been held at small colleges with football facilities in place, which would make Virginia Union and UR, with its two-year-old E. Claiborne Robins Stadium, seem to be logical choices. The university was twice scouted as a possible summer home for the Redskins years ago, but is believed to be out of the running for 2013.

Despite the new stadium and two additional practice fields, rumors circulated that there was a scheduling conflict with the university's football team. The bucolic campus off River Road is also less visible than the other locations, in particular the north Boulevard corridor, with access to interstates 64 and 95, and City Stadium — a 16-acre site near the Carillon and the Downtown Expressway. UR spokesman Brian Eckert says the university hasn't had any contact with Redskins officials.

"I don't know what they mean when they say there would be a conflict with our football team," Eckert says, pointing out that institutions like Wofford College, which has a football team, plays host to the Carolina Panthers training camp. "If the Redskins were to say that this is where they want to be, of course we would work it out with them."

Most eyes seem to focus on City Stadium. The city's conducting an economic study of the location's use as a sports and entertainment facility, though not necessarily for the Redskins. But the city has a vested interest, politically, in upgrading the stadium for the Skins. A year ago, a plan to develop the 16-acre site into retail shops and a residential community largely was opposed by residents in the area, and keeping the site as a sports facility allows the mayor and City Council to avoid making a tough decision on City Stadium's future.

In May, the city administration issued a request for proposals to upgrade City Stadium and shunned City Council's directive a year ago to consider wider potential uses for the site, including retail and commercial development. The city wants a study that "reflects the capacity for related sports entertainment/community facilities and supporting offices. No mixed uses or other uses in this proposal at all … not in siting, not in feasibility," the city responded May 18 in an addendum to the request for proposals, answering questions from potential bidders.

But sources say the more realistic move is to North Boulevard, where there are facilities in place. The Arthur Ashe Center could be used for indoor training and film study, for example, and there are hotels nearby. In contrast, converting City Stadium into the Redskins' new summer home would require more money and time to build.

"It is premature to say what the specific costs will be," Jones said in a statement June 29, "as costs will be driven by the site decision that is made and have to be looked at on at least three fronts which includes, whether we retrofit or build a new field house, field cost itself, and how extensive the facilities will be to create the appropriate fan experience."

Jones expects his steering committee to make recommendations on a location by mid-September or earlier, just in time for the NFL's 2012 kickoff. S