Sometimes it's good to get out of the Richmond food bubble. Here's what I learned on my trip to a food journalists' conference.

Brandon Fox VCU graduate Art Stone, at right, tells a group of food journalists how his biscuits and chocolate gravy came to be.

Seattle has an entire shop devoted to umbrellas. That says a little something about the place.

But all I see is the sun as I march through the city’s crowded, mazelike Pike Place Market. I’ve been lost for about an hour — the market is on six levels — and finally am rescued by the market manager, who reunites me with the group I’m supposed to be following.

After hearing the history and future plans for the market, the members of the Association of Food Journalists stride into the fray, casting professional eyes on produce, chocolate, pasta and seafood.

The conference chairwoman, Nancy Leson, arranges tours and spectacular meals with food prepared by some of the best chefs in Seattle for us, and fellow attendees drill down deeply to discover the best spots to visit in what little free time we have.

We don’t eat every minute of the day — although sometimes that’s how I feel. As at any conference, we attend informative sessions and find out a lot about the food scene nationally. Here are a few things that I glean during the week.

Tipping may be on its way out: Although the no-tipping experiment sputtered to a halt in New York, it’s still going strong almost two years later in some Seattle restaurants.

“I was terrified but proud,” restaurateur Renee Erickson of Sea Creatures Restaurants says about instituting the policy.

There’s an enormous economic divide between the servers in the front of the house and those who work in the back. By doing away with tipping and imposing an 18-percent service charge on each check instead, that wage difference can become more equitable.

Has there been much blowback from customers? Apparently not — although the denizens of Yelp aren’t necessarily thrilled. The policy hasn’t cut into business and the chefs say that they rarely receive a face-to-face complaint from a customer in the restaurant.

Fine dining is problematic: When asked if fine dining was on its way out, three owners of Seattle white-tablecloth restaurants — Canlis’ Mark Canlis, Thierry Rautureau of Loulay and Luc, and Café Juanita’s Holly Smith — naturally answer no.

But there’s been a shift in the restaurant world during the last 10 years: It’s now possible to get the well-executed, chef-y food that used to be the almost exclusive province of fine dining in a casual setting. Rautureau argues that one dines in the first, but merely eats in the second.

The fancier, more expensive restaurants buy the best ingredients they can find, use pricier tableware and, most important, employ a large staff to make sure customers’ needs are immediately taken care of.

“It’s a higher form of food and service,” Canlis says. The meal becomes perhaps a once-a-year event for the diner, something to be anticipated and savored slowly. “Not everyone can afford a Mercedes,” says Rautureau. “Why should everyone eat at my restaurant?”

“Despite our reputation, most of my guests can’t afford to be there,” Canlis is quick to add. “They’re just normal people — they’re just like us and [their visit to the restaurant] is a big deal. It’s a place they’ve always wanted to come.” 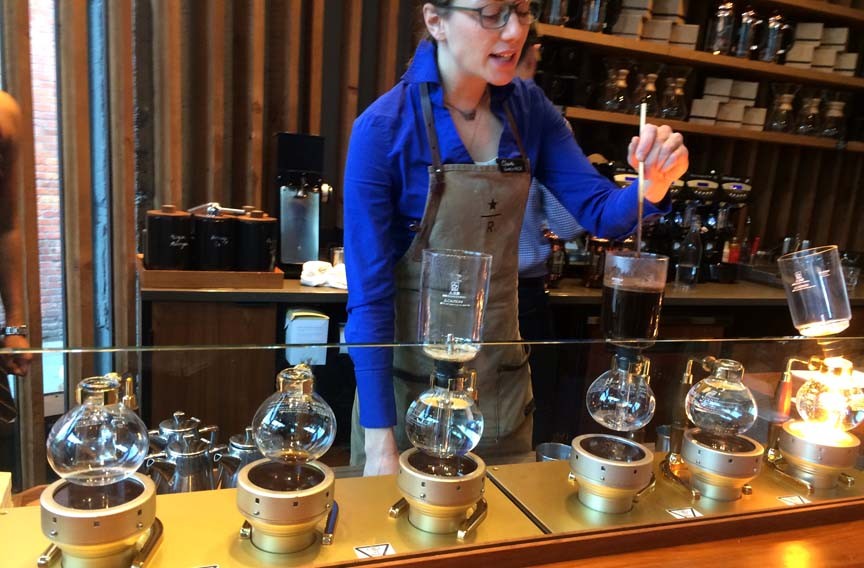 Seattle is Starbucks’ town: Think what you may about the company, but Starbucks singlehandedly started the demand for better coffee in the late 1980s. Although it continues its steady march across the world — even opening its first shop in Italy in the next year or so — we see a new kind of Starbucks in Seattle, the Starbucks Reserve Roastery & Tasting Room.

It’s a sprawling, gleaming, coffee mecca with small batches of specialty coffee roasting on the premises, a row of Clover coffee systems — the water is forced up through the grounds — and fancy Hario siphon-vacuum coffee makers from Japan that looked like lab equipment.

You can’t get a latte here — the focus is on the coffee and coffee alone. The most interesting fact gleaned from the trip? Freshly roasted coffee beans produce a thinner, sharper brew. Roaster Josh Read says that it’s essential to age beans for five to seven days to allow the oils to come to the surface in order for a rounder, fuller flavor to develop. I had no idea.

There are biscuits everywhere: This town really loves its biscuits. We find the most arresting one at Honest Biscuits at Pike Place Market. Here, Virginia Commonwealth University graduate Art Stone makes and sells a warm biscuit with chocolate gravy. Read that again. Not chocolate sauce — chocolate gravy.

Stone is from North Carolina and says that his mother made them as a treat occasionally when he was little and then lost the recipe. He asked her about it years later. “She said that of course she hadn’t lost the recipe,” he says. “ She stopped making it because it was unhealthy and didn’t want my little sister to know about it.”

Marijuana is legal: I don’t recall this until I see a billboard that says “cannabis” in large letters on the way from the airport to my hotel. In addition to the smokable variety, the city’s small producers have created an enormous amount of edibles made out of fine chocolate and caramel. You also can find gummy bears, gourmet peppermint patties, peanut butter cups, sodas and THC-infused sugar. It’s a strange, strange world.

The final takeaway: The website AllRecipes.com, based in Seattle, is taking over everyone on the internet’s kitchen and the Amazon Fresh grocery trucks you see throughout the city soon will be everywhere else, too — so get used to it. The home of Microsoft and Starbucks knows how to execute monolithic takeovers.

Charitable organizations such as Fare Start, which trains the homeless to work in restaurants, and Big Table, which provides care to restaurant workers who often live close to poverty without health care or a safety net, need to be replicated in Richmond.

There is a lot of amazing food. And wine. I discover that when you really think you can’t eat another bite, if you wait an hour or so, you actually could consume another meal. I recommend visiting a city with 50 food journalists from across the country. From your eyes to the plate to your mouth, a city’s food is equally important as all the other attractions clamoring for your attention. S