Fewer Homeless, But a Rise in "Panhandler Pimps?"

Have panhandlers filled in streetcorners in the wake of Richmond's declining homeless population? 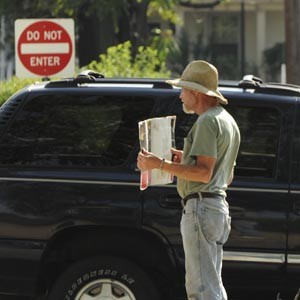 You might see more panhandlers on Richmond's corners, but they aren't all homeless — and some of them are making pretty good money.

Despite more visible panhandlers, the newly released July census from Homeward shows the number of adults who are homeless in the region has decreased in the last 12 months, from 906 in July 2009 to 748 in July 2010. The percentage of homeless people who report asking strangers for money — about 17 percent — has stayed the same.

“The people that panhandle are not necessarily homeless,” says Melba Gibbs, executive director of homeless services agency Freedom House. And panhandling isn't always the last refuge of the desperate.

One man recently showed up at the Conrad House feeding program and started flashing around a wad of $800 he said he'd made panhandling, Gibbs says. The program director kicked him out, telling him, “You can go to Morton's Steakhouse tonight.”

That's not average, of course. In an informal survey conducted in the spring by Homeward, the region's umbrella organization for homeless services, several panhandlers reported making $30 to $40 on a typical day. A few said they made as much as $60, and others said they collected just $5. On an exceptionally good day — say, around the holidays — they reported making $100 or even $200.

One 42-year-old man told Homeward that working for a temporary labor agency usually nets him about $40 per day; the same as panhandling, or “flying,” as he called it. A panhandler making $40 daily, working five days a week, would earn $10,400 in a year — just under the federal poverty line for pretax income for a single adult.

“And it's tax-free,” 1st District Councilman Bruce Tyler says. “So for every dollar that you or I make, they're making 25 or 30 cents more on the dollar.” Tyler sponsored an unsuccessful bill in 2007 that would have required panhandlers to get a $25 city permit.

Gibbs has heard of cases where so-called “panhandler pimps” recruit men who are homeless by offering them a nightly stay in a motel. Each morning, the organizers drop off the panhandlers at various locations, then collect the crews and claim most of their earnings.

Most local homeless services agencies encourage generous passersby not to give cash to panhandlers. Give a fast-food restaurant gift card or a bus pass, they say, or donate to a nonprofit organization instead.